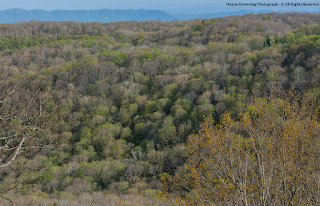 The forest remains open at elevations above 3000 feet across the High Knob Massif, as of 17 May 2020, with trees varying from having sizable leaves to no leaves.  Reference the natural calendar for more information. 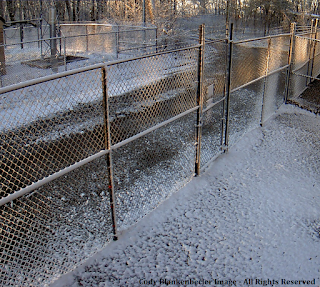 The deepest snow was over leaves and grass, not gravel (as above), outside of some drifting which actually occurred along the lines of highest ridges and in high elevation gaps.

Rain changed to snow across the high country
of the High Knob Massif into the evening and overnight hours of 8-9 May 2020.

Air temperatures plunged to 19 degrees at the summit level, with wind chills dipping to around 0 degrees and below in northerly gusts. 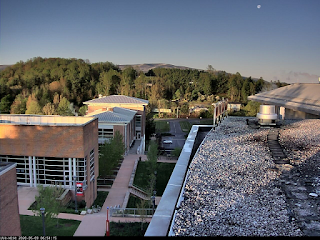 The high country of the High Knob Massif and Mount Rogers-Whitetop stood out dramatically across western Virginia at sunrise on 9 May, with the most extensive covering of late spring snow and rime detected by GOES-16 imagery. 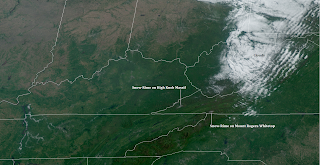 This marked the 8th event to produce some snow at highest elevations in the High Knob Massif since the beginning of April 2020 (total snowfall of more than
13" during this mid-late spring period). 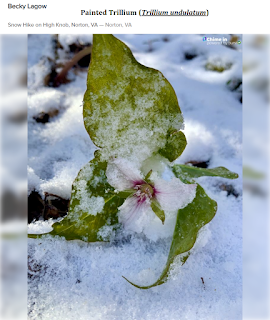 Photographer Becky Lagow captured a beautiful Painted Trillium drooped over in the morning snow.  These are yet to bloom within the cold air collecting basins (such as Big Cherry Basin) of the massif, and are a northern species of trillium restricted to mid-upper elevations
of mainly western Virginia.

They grow within northern hardwood forests of the
High Knob Massif, including fingers of north woods that follow cold air draining the high country through middle elevations into the lower elevation zone. 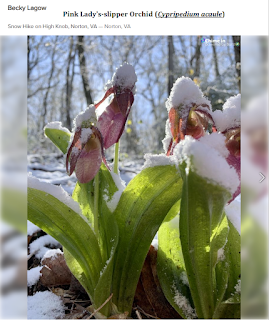 Pink Lady's-slipper Orchids are common
but typically localized in their distribution.

Reference May 1989 Weather for an example of
a similar late spring snow at this time during May, including a pattern that produced deadly flooding. 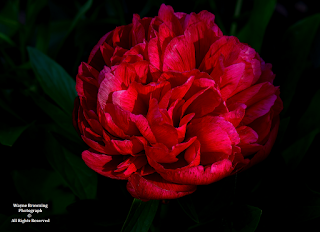 Whether it be cultivated, or natural, this
time of year is wondrous in many ways. 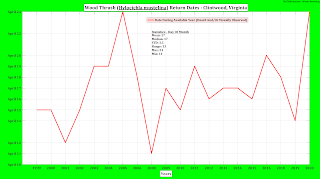 Take, as one example, the mean return of the Wood Thrush which is April 17 at the latitude of Clintwood, Virginia in the Cumberland Overthrust Block.

During 20 observed years, a range from 14-20 April
has been the period during which it is nearly certain to return (3 day standard deviation from the mean-median return date of 17 April).

A common denominator between the two latest return dates is domination by northerly air flow during April 2005 and April 2020.  In other words, a ''headwind'' which any pilot knows can slow the trip down (and cause more fuel, in this case energy, to be used).  So, northerly air flow is not favored for migratory birds flying northward.

Most birders know that it is a well documented fact that many birds, especially the small Wood Warblers, will spend extra time in favored locations along the northern Gulf of Mexico following long flights across the Gulf when northerly air flow is dominating the eastern USA.  The birds stop, refuel, and rest for continued northward migration when conditions become favorable.

Slow Emergence Of Spring
In The High Country 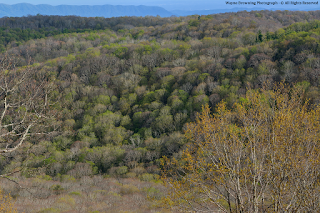 Mean temperatures in the 40s during the 1 April to 17 May period have held spring emergence back at upper elevations of the High Knob Massif, where minimums dipped into upper 10s as recently as May 9-10.

While some freeze damage has been observed on tree leaves, due
to limited emergence (and the hardy nature of spring ephemeral wildflowers) freeze damage has not been as extensive as during
major May freezes of recent decades (e.g., May 2005). 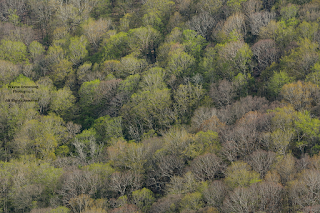 Much like autumn, emergence of spring within central-southern Appalachian northern hardwoods is colorful and majestic.  Always a true blessing to experience
every season. 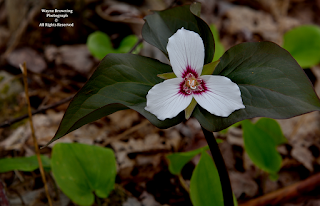 A gorgeous Painted Trillium was blooming amid a huge patch of Canada Mayflower (Maianthemum canadense), most of which was not yet in bloom, during afternoon hours of 17 May. 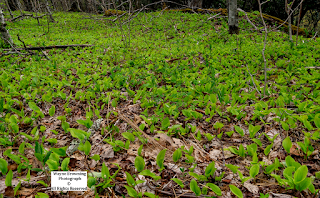 Canada Mayflower is most abundant in basins where nocturnal cold air formation occurs, and at highest elevations along wind swept ridges and meadows.  It is more abundant in the High Knob Massif than within any other area of the Cumberland Mountains, with its extent being under-estimated by famous field ecologist Lucy Braun (who did not survey
the massif of High Knob).

Many acres are covered by the small but beautiful
Canada Mayflower in upper elevations, a notable
species with a distinctly northern affinity.

It typically grows in association with Yellow Birch (Betula alleghaniensis) in the High Knob Massif, with many other northern species like Painted Trillium and a host of breeding avifauna.

A few of the bird species observed
during this particular survey included:


Many other high country summer breeders are, or will soon, take their places amid the forest, such as Canada Warbler (Cardellina canadensis), Magnolia Warbler (Setophaga magnolia), Hermit Thrush (Catharus guttatus),
Red-breasted Nuthatch (Sitta canadensis) and many others. 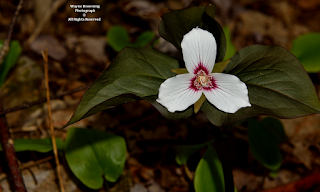 A cloud of small, black flies were observed during
17 May and at least one gave me a bite (despite wearing insect repellent) that again generated itching, swelling, and irritation for several days following the bite (*).  A bite, which is never initially felt since these flies inject an agent to prevent the host from feeling the bite, until
its too late!

*I forgot to spread Skin-So-Soft (reference below) on exposed skin (the bite occurred on the back of my hand), which I will make an effort NOT to forget again this season.

I encountered these flies years ago and since have found they live generally at or above 3000 feet elevation in the High Knob Massif, and are analogous to flies which can plague folks around the Great Lakes, New England, and Canada.

Teena has written a great article describing them:
The Definitive Guide to New Hampshire Black Flies

Teena includes a natural, repellent recipe for Black Flies that I am sure will work.  I have had excellent luck with Maggie's Farm Natural Insect Repellent (including some of her listed ingredients) in combination with AVON's
Skin-So-Soft spread on exposed skin.

The University of Wisconsin-Milwaukee has great information on these critters, including a photograph that looks very much like the ones observed in the
high country of the High Knob Massif.

I have not yet tried to photograph them, as I am typically
documenting other things, but that may have to change.

The good news, these flies indicate the presence of clean, running water in lakes and streams.  The bad news, in a wet, mountainous habitat like the High Knob Massif they can reproduce longer and their season tends to be extended through mid-summer (instead of just late spring-early summer).

With a general 50.00" to 60.00" of precipitation having fallen across upper elevations of the High Knob Massif during the past 5 to 6 months, this is expected to be a banner season for northern black flies and possibly
other menaces (to humans) of the deep forest.

An abundance of lakes and natural wetlands
(the High Knob Massif contains the most mountain-top lakes of any mountain in the Appalachians), in addition to an array of whitewater creeks, makes the massif of High Knob an ideal location for this menace
of the north woods! 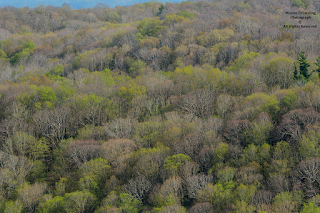 A horde of Eastern Chipmunks (Tamias Striatus), many with babies, were running throughout the woods, across roads, and everywhere else.

They can achieve exceptional abundance, it appears, across upper elevations in the High Knob Massif due
in part to an abundance of food sources. 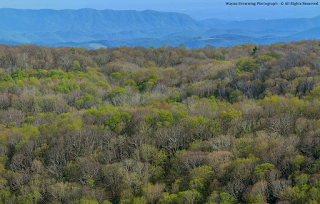 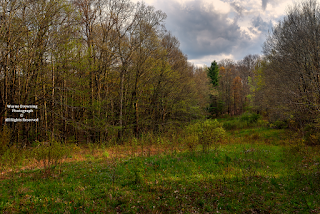 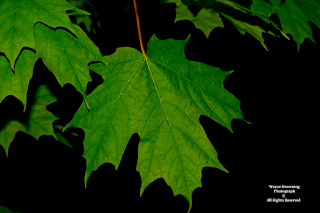 Posted by Wayne Browning at 8:36 AM