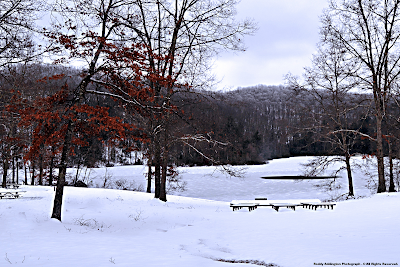 Ice, wind, snow, and rime!  The High Knob highcountry got it all with this latest winter storm, which largely dissappointed lovers of snow across far southwestern Virginia as a warm layer aloft spread across western slopes of the Appalachians.

Unlike the Miller A Track Cyclones of Decemer 2009, and late January 2010, this storm became more of a Miller B variant with a secondary center of low pressure which moved north into Kentucky, as the primary, and dominant center, developed near the Atlantic Coast and BOMBED off the Virginia Capes! 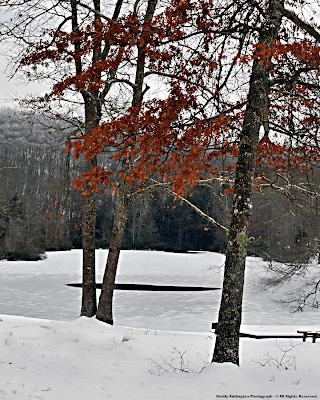 
Ice visible on trees in the distance lingers from ice storm conditions which engulfed the massif during February 5, as gusty SE-SSE winds upsloped across its sprawling highcountry. 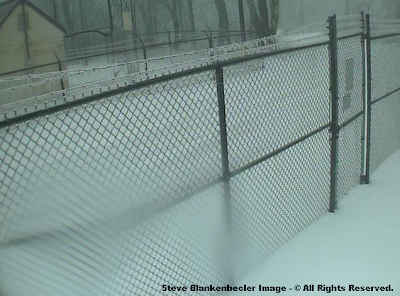 
Icicles formed on everything, as seen hanging from the barbed wire along top of chain link fence above, with falling snowflakes aloft melting amid an above freezing layer prior to reaching the sub-freezing highcountry atmosphere ( as rain )! 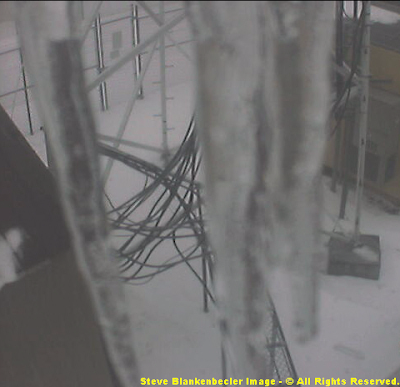 
Ice accumulation became significant enough to cause trees to droop, and some to break, as ice coated the massif for miles and miles along either side of the Wise-Scott and Scott-Lee borders ( as well illustrated by my friend Steve Blankenbecler ). 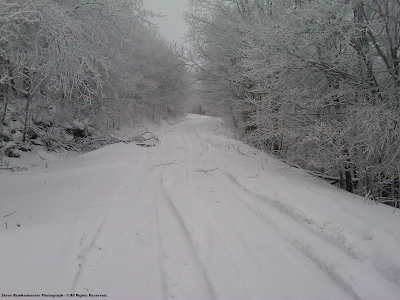 My past climatology has well documented that ice storm and/or snowstorm conditions become common within the High Knob Massif on E to SE air flow trajectories, as compared to surrounding locations across far southwestern Virginia, under such winter time settings. 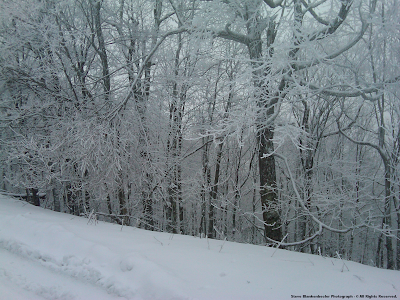 This makes the High Knob Massif climatically unique, and is of special added importance since hundreds of people live within the highcountry along either side of the Wise-Scott border ( with tens of thousands who use this portion of the Clinch Ranger District of the Jefferson National Forest for recreation ).

Therefore, with respect to National Weather Service Zone forecasting a suggestion would be to group southern Wise and northern Scott counties together to better account for such conditions, where people live and travel, with appropriate winter weather advisories ( e.g., Ice Storm Warning in this case ). 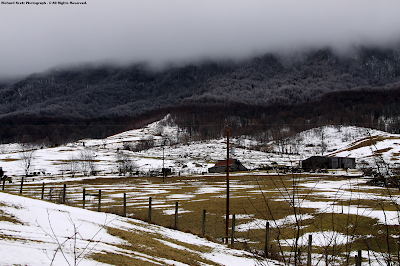 [ The above photograph is quite interesting in that it illustrates a icing level that Richard noted was around 2500 feet, beneath which air was clearly above freezing.

It also shows the result of the last significant snow in late January in which easterly winds blew the snow into nearly horizontal lines of parallel drifts ].

Adjacent high crestlines ( such as those along Big Black Mountain and Clinch Mountain ) also support icing in these situations, but are much more narrow in topographic nature and do not contain hundreds of permanent residents like those scattered across the sprawling High Knob Massif ( the widest mountain in southwestern Virginia from base to base ). 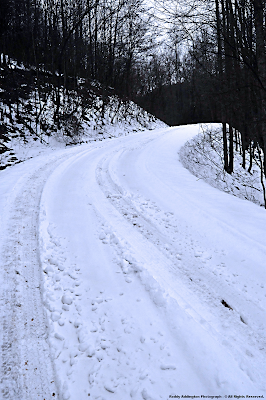 Climatology reveals that secondary low pressure centers, and those which track northeastward along or adjacent to the western Appalachian slopes, tend to be detrimental to snowfall amounts across the western Appalachians and foothills ( via increased downsloping leeward of the main mountain divides and/or the transport of tongues of "warmer" air aloft, with notable synoptic-scale exceptions ).

A local exception is the remnant highcountry of the High Knob Landform ( HKL ), where upper elevations ( above 2700 feet ) of its massif generally tend to receive significant amounts of wintry precipitation ( i.e., ice and/or snow ) when low-level air flow trajectories contain an easterly or southwesterly component in such winter precipitation settings.

Storm total precipitation ( liquid equivalent ) was very significant during this event across the High Knob Massif, with KJKL Doppler showing a rather classic SE air flow driven upslope and downslope couplet along the Virginia-Kentucky border. 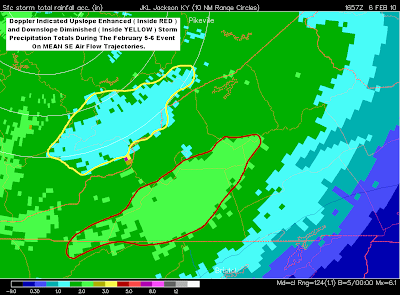 
Despite up to 2.00"+ of total precipitation, the snowpack along high crestlines and upper north slopes of the massif did not settle nearly as much as expected.  This was likely due to a thick coating of ice which formed over top of the snow. 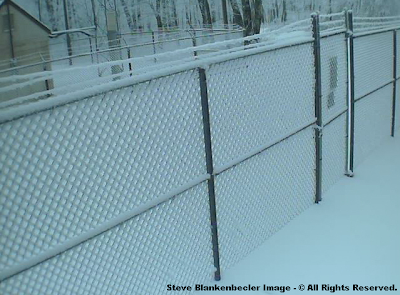 
Snowpack within the majestic Bark Camp Lake to High Chaparral corridor of the highcountry
( 2700-3300 feet elevation zone ) did settle much more, with Darlene Fields measuring a mean snow depth of 10" ( southern exposure ) on February 2 and 6" on February 6. 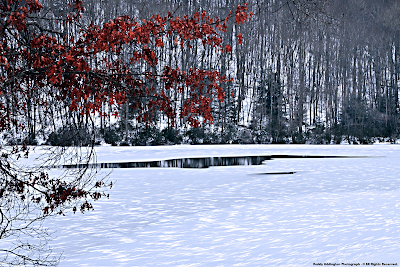 White ripples on the frozen surface of Bark Camp Lake have formed via swirling snow, to mimic those shimmering more fluidly during warmer times! 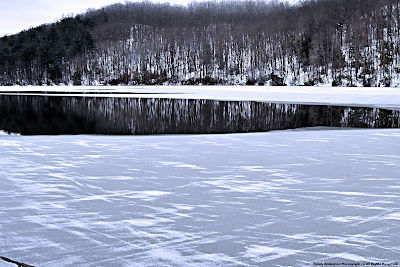 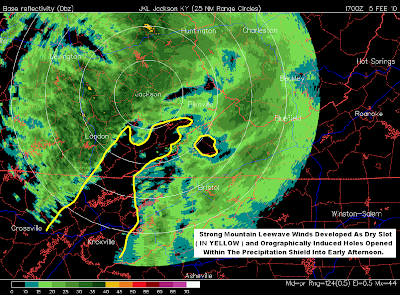 
Powerful, ROARING winds were reported in Powell Valley of Wise County, Va., where power outages occurred, and north of Clinch Mountain in portions of Russell and Tazewell counties.

Onset of the powerful winds coincided with the arrival of a dry slot, and the pre-dry slot opening of holes in the precipitation shield, as highlighted on the above Doppler image.

Wayne & Genevie Riner began clocking 50+ mph gusts just after noon on February 5, as the first opening formed leeward of the High Knob highcountry and moved across the highlands of southern Dickenson County.

Peak gusts as high as 79 mph were clocked at Southwest Virginia Community College near Richlands, with locally higher speeds possible across portions of Wise, Russell, and Tazewell counties.

In dramatic contrast, winds remained light with fog in mountain hollows around Clintwood lying beneath a temperature inversion, as the powerful winds blew over its top. 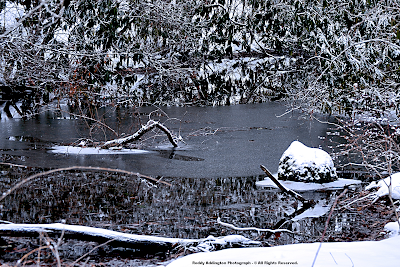 
A closer inspection of the above scene reveals Mother Nature's simply incredible handiwork, as atmospheric moisture and cold air merged over time to form an intricate display around an old, snow covered stump. 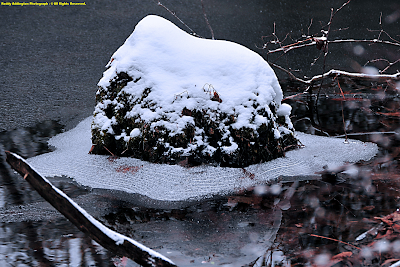 Amid the vastness of the High Knob Massif, and a storm as huge as the METRO "snowmaggedon," it is awesome to ponder such delicate creations! 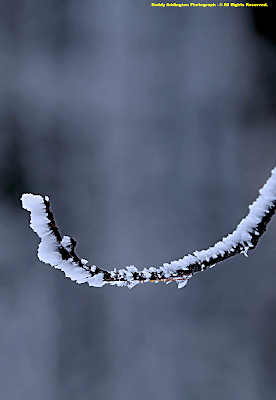 Although new snowfall amounts were 1" or less below 3000 feet, with 2-3" across the High Knob Massif following its ice storm, this event generated yet another interesting aspect when cloud bases lowered late on February 6 to engulf much of the area within an icy vapor of dense fog ( clouds ). 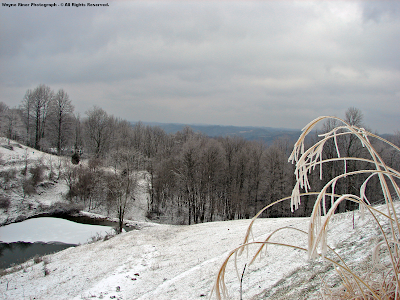 It brought RIME down into middle elevations, to the town of Wise, and other communities, which typically rest beneath the riming level during many wintry events. 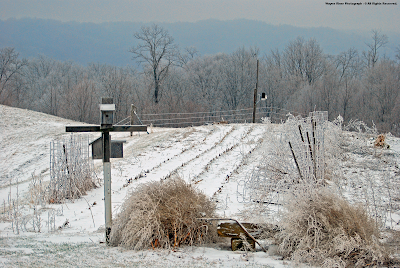 
Rime coats tomato cages in the garden as some old snow lays between the rows.

An anemometer stands at the far end, waiting to record any wind, as rimed trees rest against a background of misty blueness of highland ridges.

For much more about RIME
in the High Knob Massif please reference: