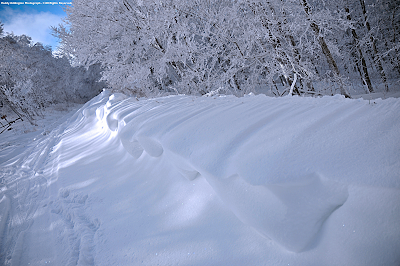 The Christmas Holiday snowstorm of 2010 was the event which created history by making this already snowy December the snowiest on record since at least the 1970s.

Here is a brief, daily recap of conditions
leading up through this Holiday winter storm.

December 20
My friend Steve Blankenbecler reported a 14" depth at a snow marker on Eagle Knob with Steve saying, "but you can walk and still find plenty of 2 feet to 30" depths laying around."

December 21
Light to moderate overnight snow developed with weak isentropic upglide along a warm front, with a general 0.5" to 1" of new snow accumulation from the High Knob Massif north to Clintwood.

This marked the start of a mini pre-Christmas thaw, with 30s to near 40 degrees widespread at all elevations behind the warm front.

Another day of widespread 30s contributed to significant snow melt ( especially on above ground objects ), with 0.96" of melt water released from a automated rain gauge on the Eagle Knob of the High Knob Massif ( ground depths, however, did not diminish as much as suggested by this large melt water release ).

December 23
Lowering cloud bases accompanied by sleet to light snow amid valleys, and light snow across the higher elevations, developed from evening hours of December 22 into the following day. 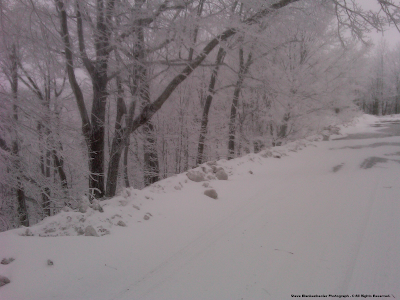 Morning temperatures in the low 10s atop the High Knob Massif, with colder wind chills, were accompanied by new rime formation at the higher elevations.

[ Many standing lee wave clouds were observed during the day as northwesterly winds blew vigorously across Pine Mountain, Black Mountain, and the High Knob Landform toward northeast Tennessee ].

Christmas EVE ( December 24 )
AM snow depths varied from a foot or more across upper north slopes and crestlines of the High Knob Massif to 1" or less at some well exposed lower to middle elevation sites with southern exposures.

Cloudy, cold conditions ruled Christmas Eve day with maximums in the 20s to around 30 degrees from Norton-Wise north to Clintwood as mid to high altitude cloudiness lowered and thickened in advance of the next winter storm.

Doppler indicated virga ( precipitation falling aloft ) began reaching the summit level of the High Knob Massif during evening hours of Christmas Eve, as the atmosphere saturated from the top downward! 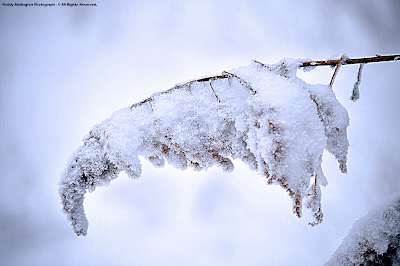 Light to occasionally moderate snow, with embedded heavier bursts, dominated the overnight to sunrise period of Christmas Morn to generate an idyllic 2" to 3" of fresh snow ( moderately wet in nature compared to the FLUFFY snowfall to follow ).

[ Christmas morning snow depths varied from around 5" ( 3" to 7" ) in Clintwood and Norton to as much as 15" amid higher elevations in the High Knob Massif ( deeper in drifts and on upper N slopes ) ].

Snow densities decreased ( snow to water ratios increased ) as colder air poured into the mountains during Christmas afternoon and evening.

[ Reference this section of the website for a recap of the past 30 Christmas Holidays:

December 26
Steady light snow through the overnight period became showery and heavier in nature by the PM of December 26, with large dendritic flakes and other crystal forms arising as strong & gusty winds increased upsloping amid the bitter air.

This was part of the period that generated massive drifting along high crestlines and gaps.

Afternoon temps in the 10s from Norton-Wise into the High Knob Massif fell into the single digits on Eagle Knob by 7 PM as snowfall turned heavy ( the heaviest and most intense snow of this event fell from PM hours of Dec 26 into the morning of Dec 27, with 9.0" of new snowfall being measured in High Chaparral by Joe & Darlene Fields ). 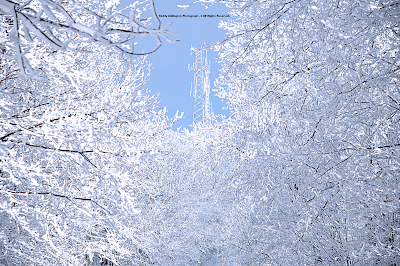 Morning snow gave way to enough afternoon clearing to create a magnificent blaze of whiteness over top of the general 1 to 3 feet of snow depth across the massif ( with locally larger drifts ). 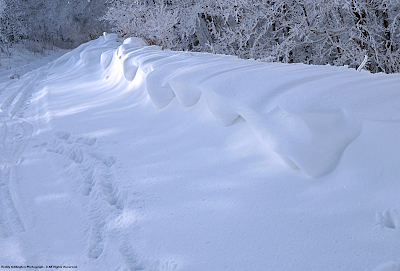 ( * ) - Approximate storm snowfall total ( local amounts may have been greater or less within the main crest zone ).  A general 4" to 5" of total settlement was observed during this event given the low density of the fluffy snowfall from Dec 25 PM to Dec 27 AM.

Mean snow depths reached around 10" in both Clintwood and Norton, varying from 7" to 13", with 14" or more of mean depth on Long Ridge of Sandy Ridge and within upper elevations of the High Knob Massif ( where snow depths were generally knee to waist deep, or higher, as documented by these photographs ). 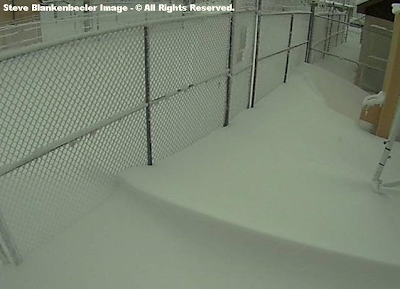 The Snowiest December
On Record

*Approximate tally ( with greater and lesser amounts likely
within the main crest zone of the massif between Bowman
Mountain and Thunderstruck Knob of Powell Mountain ).

The 55.0" of snowfall in High Chaparral of the High Knob Massif pushed the seasonal tally to nearly 5 feet ( 59.5" ), as of Dec 31, and was further verified by 6.20" of total precipitation measured by Otis & Nancy Ward in the nearby Robinson Knob community.

[ The above being especially true since a significant amount of precipitation was lost during December by the 4"-diameter NWS rain gauge which could not hold all of the deep snowfalls.  The actual December tally is figured to have been more than 6.50", much more, with well over 4.00" of it in snow water content ]. 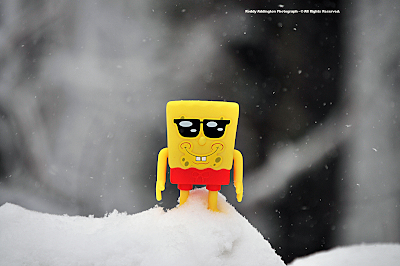 These huge snowfall numbers were further verified by my friend Gary Hampton who measured 6.53" in the 4"-diameter NWS gauge at Big Cherry Dam for the month of December into early January.

[ Although conditions got so bad that Gary & Staff could not reach Big Cherry Dam during December, the 6.53" total was very significant given that the rain gauge was overflowed by snow during the first big Dec 4-8 event.  While it is not possible to know the true total, a very conservative estimate of snowfall loss by the rain gauge ( based upon observed snow densities and the physical storage capacity of the gage ) yields 7.35" for a December 2010 total ( in reality, there is no way the rain gauge caught 80-89% of the precip which fell during this period, such that the estimated 7.35" total has to be too low based upon the 6.53" measured amount ).

The only major rain included in December 2010 was for the 24-hours ending on December 1, and it was much less than rain tallies reported on high mountains toward the southeast ( along the TN-NC border ).  Otherwise, except for a period of icing, all December precipitation fell as snow ].

The bottom line of the above being that an impressive amount of precipitation fell across the High Knob Massif during December, and that it was not possible for the smaller 4"-diameter NWS style rain gauges to collect what fell ( it would have required constant monitoring and emptying of the gauges for them to have even been reasonably close to what actually fell as snow ).

[ Due to wind induced rain gauge undercatches, which can become extreme in snowfall, the only way to have obtained a true measurement would have been by taking snow cores to melt for water contents.

Reference the following section of my website to learn more about wind induced rain gauge undercatches:

*Long-term mean is actually higher due to physical rain gauge losses in winter falls of snow during the 1983-1998 period ( prior to installation of a large 8"-diameter NWS gauge ).

In the High Knob highcountry, December temp means varied from low-mid 20s at the higher elevations by day to low-mid 10s in colder basins by night ( near to below zero MINS occurring numerous times ).

[ The coldest places likely having an average ( mean ) monthly minimum as low as 10 degrees given enhanced cooling from a deep and persistent snowpack ].

Northern slopes at the higher elevations had 1" or more of snow depth during every December day, with the majority of the month having a foot or more of depth across north slopes amid the main crest zone ( e.g., High Knob Lake Basin and upper basins of    Big Cherry Lake, Norton Reservoirs, Lost Creek, Clear Creek ).

Despite mean temperatures far below freezing, Big Cherry Lake overflowed its spillway during every December day ( overflow started on November 27 ).
Posted by Wayne Browning at 3:24 AM