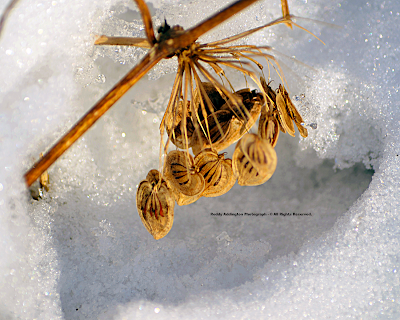 
Thomas Wieboldt, of Virginia Tech's Massey Herbarium, says the Cow Parsnip Family "has a unique type of fruit called a schizocarp which is comprised of two parts. In this case the two parts are sandwiched together like holding your hands palm to palm.  When mature, the two halves split apart, each with its own single seed inside, hence the name ‘schizo’ = ‘split’
and ‘carp’ = carpel (fruit)."

Surrounded by snow, a clump of seed pods dangle in bitter air as a potential source of food and energy yet to be utilized during harsh days ahead. 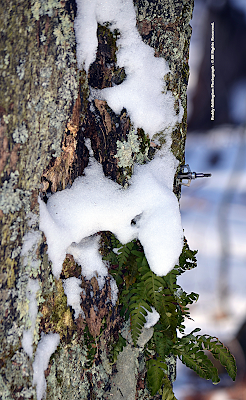 Roddy did not even notice the added piece of this interesting scene when he took the photograph, focusing at first upon the snow and ferns hanging on the side of this tree ( numerous trees grow ferns here ).

A Razorback Broadhead From A Bow Hunter 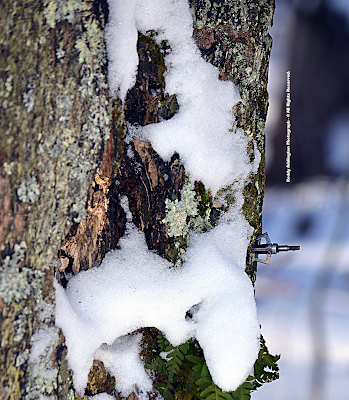 A razorback broadhead from a bow hunter's arrow was lodged in the tree, without the shaft. 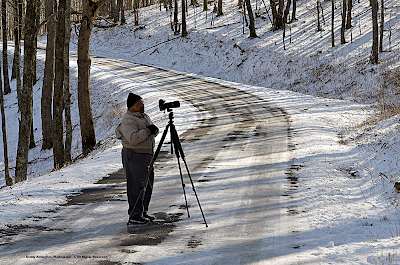 Photographer Bill Harris stands on a slick State Route 619 as he composes a shot during a weekend trip with Roddy to capture some winter scenes in the High Knob highcountry.

Roddy said the roadway was covered by snow and ice from just above Norton all the way into Scott County, past the Camp Rock of Big Flat Top, with Bill having to shift into 4-Wheel Drive near the 3300 foot level of the Upper Norton Reservoir. 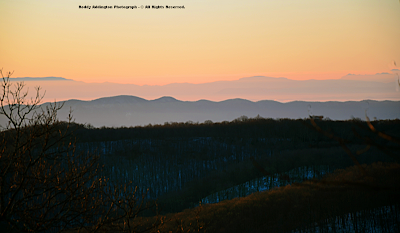 
Some 18 days with 1" or more of snow depth have been observed in the High Knob Lake Basin since October 1, despite a pattern most consider as mild.

The December 7-11 period was quite cold and wintry in the High Knob Massif area following the heavy snowfall, with persistent snow cover making conditions colder than places with bare ground.

In the High Knob high country temp means during this 5 day period varied from low-mid 30s by day to low-mid 10s by night.  MINS fell into single digits amid lofty, snow covered basins of the massif into morning hours of December 11. 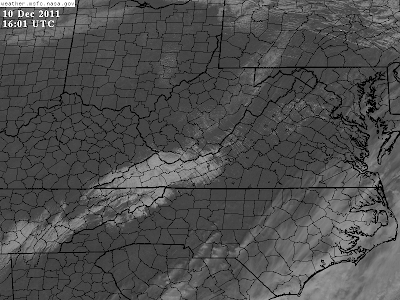 
Low clouds lingered into early afternoon hours of December 10 in the wake of a arctic-like cold front, which produced flurries but no new accumulations.


While the front did not possess any true arctic temps it brought extremely dry post-frontal air from interior regions of Canada.


The front had a couple of notable weather impacts upon the High Knob Massif, with upslope lowering of cloud bases allowing rime to form at the summit level into morning hours of December 10 prior to a big dewpoint PLUNGE that generated the coldest night of the young 2011-12 season ( as noted above ).


Bitter temperatures that formed over the snow cover and low dewpoint air froze everything with any thoughts of liquidity to create striking scenes in the massif. 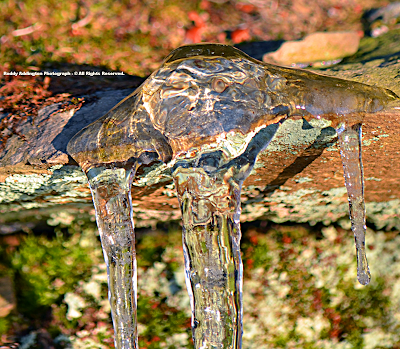 
Taking the shape of a swan or goose head, this ice formation is just awesome amid varied colorations from lichens, rocks, and other objects in sunlight.

Amazingly, the EYE
is in just the right position! 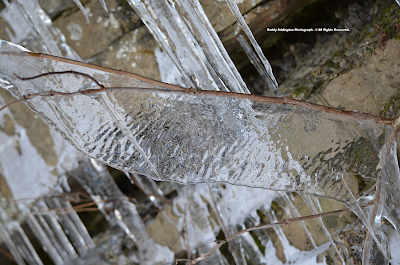 
Upon discovery of another incredible ice formation along a rock outcropping, Roddy said it looked like a huge "slab of bacon" ( him and Bill were probably getting HUNGRY by then!!! ). 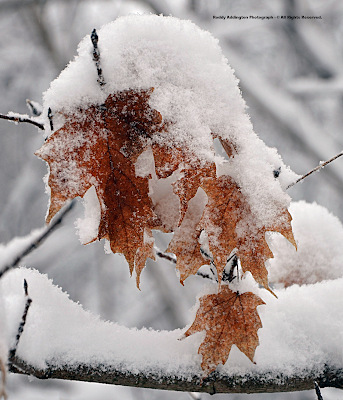 
Heavy snowfall of December 7 setting the stage for nearly all of this above, illustrating how important snow cover is to development of true winter conditions ( both locally and on synoptic scales )!


Horizontal temperature differences generate pressure gradients that drive winds on the large or synoptic-scale during this time of year, with forcing events in the High Knob Landform often becoming visible amid the heavens above! 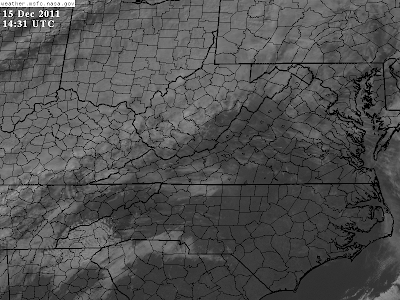 All Images Courtesy Of The Earth Science Office


Note the opaque looking wave clouds in the above image from Harlan County, Ky., into Wise County, Va., with a mountain wave cloud raised upward in appearance from NW to SE of Norton ( the City denoted by eye-like symbol ) lee of the High Knob Massif. 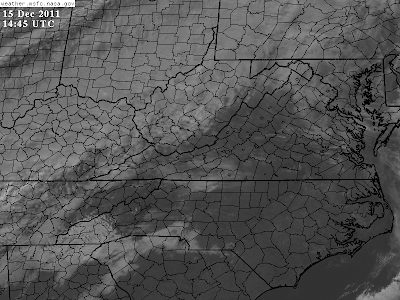 An array of smaller wave clouds can be seen along the length of the High Knob Landform and across the Black Mountains, as well as over the Great Smokies and Mount Mitchell.


Mountain waves became distinct by 9:45 AM, with the large cloud NW to SE of Norton being a standing lee wave formed just downstream of the High Knob Massif ( in a climatological position ). 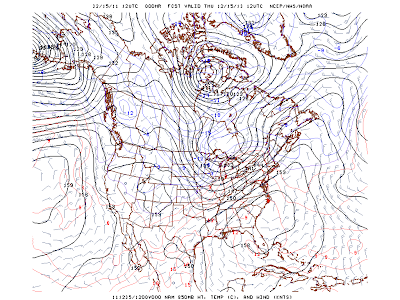 A strong SW air flow along the black isobars at 850 MB was turning a bit inward, toward lower pressure, to generate general 200 to 230 degree flow trajectories during this time.


Sustained winds of 20 to 30 mph became common in Wise, with peak gusts to around 40 mph, on a 210 to 230 degree inflow that streamed across the High Knob Massif and into the Wise Plateau. 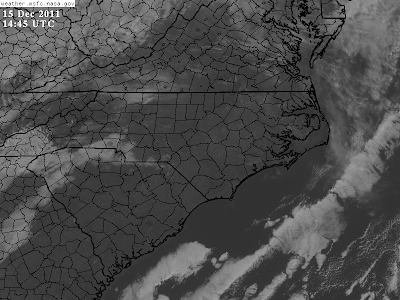 The long-lived nature of these orographic clouds can be noted by jumping ahead in time to 11:31 AM. 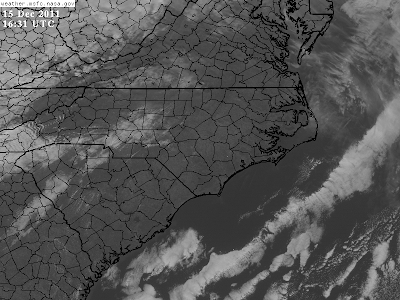 
By early afternoon wave clouds started showing up east of the High Knob Massif, as trajectories began to shift direction. 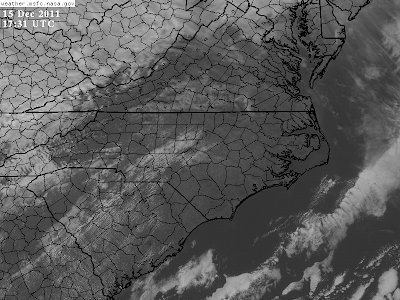 Observe the change at 850 MB on the chart below, with flow trajectories now streaming from the High Knob Massif toward the Upper Clinch River Basin in Russell & Tazewell counties. 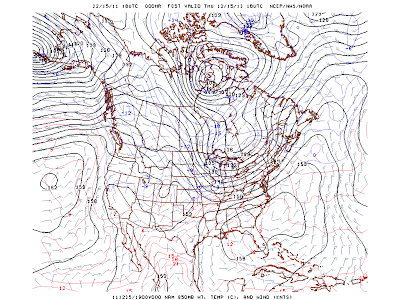 The unseen but felt portion of this wind event was orographic cooling forced by upsloping along windward slopes & crests of the High Knob Massif, with PM MAXS reaching upper 40s to middle 50s.

A 55 degree PM maximum was observed in the City of Norton where air rises from Powell Valley and along mountain slopes of the massif to cool the City on SW flow ( * ).

*It is interesting to note that during nights with moderate SW winds the City of Norton can remain much warmer than Coeburn, where blocking by the massif keeps the Tacoma-Coeburn Valley in drainage flows decoupled from main SW boundary layer winds.

The Coeburn Valley coupling back up only when SW flow gets strong enough to overcome terrain blocking effects ( generating downslope temperature surges at such times ). 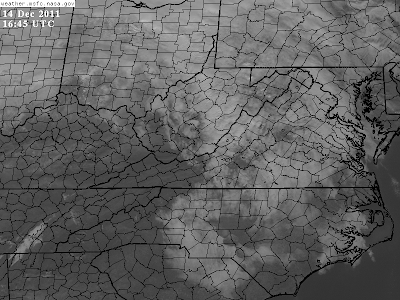 Even on a day with abundant sunshine behind a warm front, as was observed during December 14, the orographic effect with S-SW air trajectories is active when pressure gradients drive winds across the High Knob Landform to produce orographic forcing ( e.g., upsloping & downsloping using simple terms ).

PM Maxs on December 14 varied from low to middle 50s in upper elevations of the High Knob Massif to 59 degrees in the City of Norton ( with upsloping SW winds adding cooling on weak-moderate flow ).

Downsloping into the Russell Fork Basin of Dickenson County, north to northeast of the High Knob Massif, pushed temperatures to 66 degrees in Clintwood & 68 degrees at John Flannagan Dam.

The above being partly attributed to elevation but also enhanced by upsloping & downsloping, with the magnitude of all effects tending to increase as wind speeds increase.

Posted by Wayne Browning at 9:16 PM