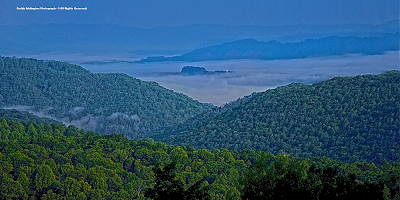 Photograph by Roddy Addington - © All Rights Reserved.
A blanket of fog covers the Norton Valley early on May 25 as captured by photographer Roddy Addington from a scenic vantage point in Flag Rock Recreation Area, amid the highcountry of the sprawling High Knob Massif.
[ Observe the top of a water tank on Backbone Ridge, near center of view, is barely visible above the fog bank over Norton where the morning temperature was 55 degrees.
Trees had filled out to near summer maturity up to this 3200 foot elevation, but were still in various stages of immaturity amid the upper 1000 vertical feet of the massif on May 25 ( prior to a temp surge that ended the month with unseasonably warm days, but still cool nights in high valleys, during May 28-31 ) ].
Climate Statistics
For May 2011
May 2011
Mayapple ( Podophyllum peltatum ) In Bloom 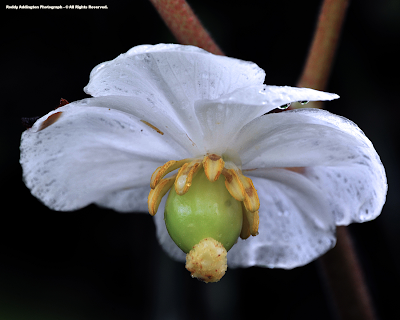 Photograph by Roddy Addington - © All Rights Reserved.
Clintwood 1 W - Elevation 1560 feet
Average Daily MAX: 73.3 degrees
Average Daily MIN: 49.1 degrees
MEAN: 61.2 degrees
Highest Temperature: 90 degrees
Lowest Temperature: 34 degrees
May Rainfall: 6.27"
Spring Precip ( March-May ): 19.35"
2011 Precipitation: 24.05"
City of Norton - Elevation 2141 feet
Average Daily MAX: 71.4 degrees
Average Daily MIN: 46.3 degrees
MEAN: 58.8 degrees
Highest Temperature: 88 degrees
Lowest Temperature: 29 degrees
May Rainfall: 5.13"
Spring Precip ( March-May ): 22.19"
2011 Precipitation: 28.12"
Nora 4 SSE - Elevation 2650 feet
Average Daily MAX: 68.6 degrees
Average Daily MIN: 51.7 degrees
MEAN: 60.2 degrees
Highest Temperature: 86 degrees
Lowest Temperature: 34 degrees
May Rainfall: 6.02"
Spring Precip ( March-May ): 20.33"
2011 Precipitation: 24.39"
In the High Knob highcountry, May temp means varied from lower to middle 60s by day to low-mid 40s at night ( upper 40s to low 50s on higher, exposed crestlines ).
Max temperatures pushed into the 75 to 80 degree range above 3500 feet on May 30 to contrast with wintry 30s that were observed during daylight hours of both May 4 and May 17.
May rainfall was actually below average in the High Knob Massif and City of Norton, with totals varying from around 4.50" to 6.00"+ .
The heaviest 5.00" to 6.00"+ amounts occurred in the main crest zone of the massif from the basins of the Norton Reservoirs and High Knob Lake to Big Cherry Lake, with somewhat less into the headwaters of Little Stony Basin.
It is interesting to observe that May possessed a notable trend of lesser rainfall amounts amid the highlands of the southern Appalachians verses some lowlands as the main precipitation mode changed from orographic forcing to convective in nature ( with storms flanking the major mountain masses or running through open valley corridors ).
[ Note that this type of convection in May was different from that of the less organized "air mass" variety highlighted below in the updated section for June 1-15, 2011 ].
May 2011 Precipitation Totals
From Notable Upper Elevation Sites
Burkes Garden: 4.20"
Mount Mitchell: 4.59"
Mount LeConte: 4.71"
Beech Mountain: 4.95"
Grandfather Mountain: 5.37"
Big Cherry Dam of High Knob Massif: 5.38"
Snowshoe Mountain: 5.44"
A few lower elevation sites that measured more during May included 5.93" in the Tri-Cities ( TRI ) of northeastern Tennessee, 6.27" in Clintwood of far southwestern Virginia, and 8.25" on the banks of the Ohio River in Huntington, West Virginia.
Orographic Forcing Season
November 2010-April 2011
May marked the first month of 2011 to be dominated by convection, from start to finish, effectively marking the end of the orographic forcing season for 2010-11.
[ The orographic forcing season is that time of year in which synoptic-scale storm systems develop pressure gradients that drive organized winds into the mountains.  In a simplistic way, although actually very complex in nature, positive ( upsloping ) and negative ( downsloping ) forcing from the major terrain features exert a significant influence upon local and regional precipitation patterns across Virginia and the USA ].
Orographic Forcing Season
Precipitation Totals
( November 2010 - April 2011 )
Wallops Island: 11.78"
Norfolk: 13.36"
Danville: 13.93"
Richmond: 16.01"
Covington Filter Plant: 17.63"
Roanoke: 18.04"
Washington Dulles ( DC ): 18.33"
Blacksburg: 18.80"
Charlottesville: 19.48"
Gathright Dam: 19.73"
Wytheville 1 S: 20.79"
Hot Springs: 21.32"
Bland: 22.38"
( 3 missing days January )
Bluefield, WV: 22.98"
Trout Dale 3 SSE: 23.16"
Grundy: 23.76"
Richlands: 24.20"
Saltville 1 N: 24.64"
Burkes Garden: 24.95"
Clintwood 1 W: 25.95"
Meadows of Dan 5 SW: 26.05"
Lebanon: 26.88"
Nora 4 SSE: 27.41"
Appalachia Lake Water Plant: 29.15"
Norton Water Plant: 32.66"
Big Stone Gap Water Plant: 34.46"
Robinson Knob of High Knob Massif: 34.49" ( M )
Big Cherry Dam of High Knob Massif: 40.37" ( M )
( M ) - Denotes moisture loss in deep falls of snow and between hand-measurements.
The 40.37" of precip at Big Cherry Dam during the six month period from November 2010 to April 2011 was very significant in that it was likely several inches lower than what actually fell, especially given elevations within Big Cherry Basin reaching up to 1103 vertical feet higher than the measuring point at Big Cherry Dam.
The above being most significant from the perspective of this season, as past records from the City of Norton show that previous forcing seasons have been much wetter.
For example, the November-April orographic forcing season of 1993-94 generated 43.63" at Norton Water Plant ( 10.97" above the 2010-11 season ), where some missing moisture made that total lower than reality via loss in snowfall with a 4"-diameter rain gage used at the time in Norton.
[ The 1993-94 forcing season would have generated 50" to 55"+ of total precipitation within wetter portions of the High Knob Massif during that six month period ].
Breaking the 40.00" barrier during the La Nina dominated season of 2010-11 was also significant for Big Cherry Dam in that it placed the High Knob Massif amid elite company in the Appalachians.
Orographic Forcing Season
Precipitation Totals Along
The Appalachians
( November 2010 - April 2011 )
Davis 3 SE: 43.63"
( Canaan Mountain, WV )
Mount LeConte: 43.20"
( Great Smoky Mountains NP )
Mount Washington: 41.12"
( White Mountains of NH )
Mount Mitchell: 40.22"
( Highest Summit In Eastern North America )
Climate Statistics
For Spring 2011
( March-May )
May 8, 2011
Misty Sunrise - Birch Knob of Pine Mountain 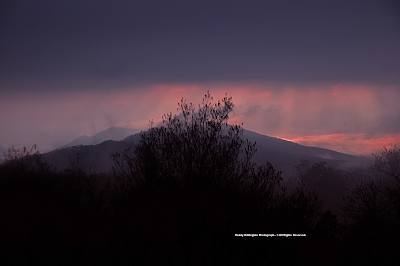 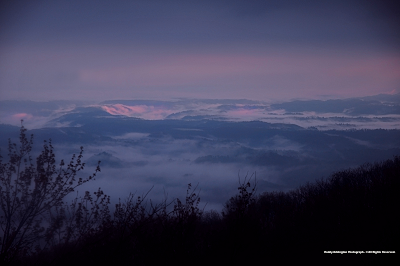 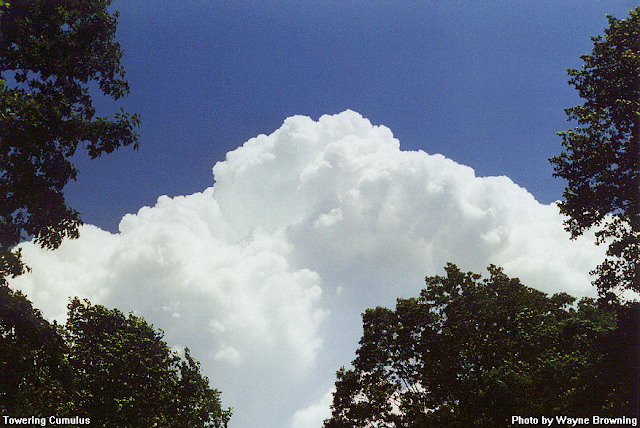 Photograph by Wayne Browning - © All Rights Reserved.
With temperatures dipping into the 40s amid mid-upper elevation mountain valleys into morning hours of June 14-15, I thought it nice to reflect upon recent days of drenching downpours and the hit-miss nature of summer convection.
Doppler Estimated Rainfall For PM of June 5, 2011 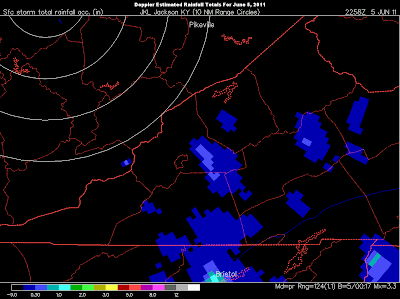 Image Courtesy of Plymouth State University
As most hikers had likely finished the June 4-5 adventure along the beautiful Chief Benge Scout Trail, a lone thunderstorm developed and dropped around 0.30" of rain upon eastern portions of the High Knob Massif ( and its Little Stony Gorge ).
A couple days later the first major convection erupted above the High Knob Massif with 50,000 foot tops soaring upward into the heavens along the Wise-Scott border.
Thunderstorms Explode During PM of June 7, 2011 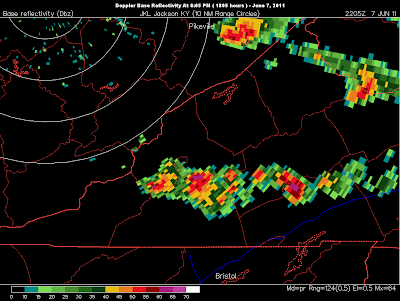 Image Courtesy of Plymouth State University
A line of broken, torrential rain producing storms formed from the High Knob highcountry eastward into the Brumley Mountain section of Clinch Mountain, with weakening as they drifted into the Great Valley toward the VA-TN border.
Big Stony-Little Stony Basins Take Hardest Hit 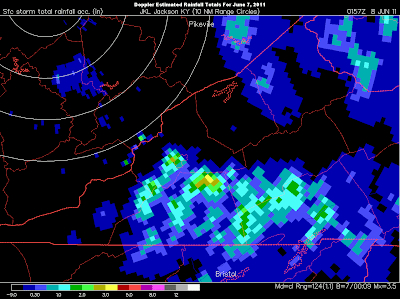 Image Courtesy of Plymouth State University
The weakening of this intense convection is illustrated above by the dissipation of their heavy rain cores toward the Tennessee border.
The heaviest 2.00" to 3.00" totals were estimated across portions of the Big Stony & Little Stony basins of the High Knob Massif in northern Scott County, Virginia ( where backbuilding and slow movement occurred over time ).
[ The City of Norton took a hard but varied hit, with dime size hail and local power outages reported.
The 0.75" of rain measured in the official NWS gage at Norton Water Plant was correctly estimated by Doppler on the southeastern side of the City ( 0.50-1.00" ).
Meanwhile, double that much rain, or more, fell along portions of the northwestern side of Norton with dramatic tapering to less than 0.30" northeastward toward the Guest River and Norton Elementary School.  An excellent example of the often wild and wooly short distance variations associated with summer storms! ].
This merely marked a warm up for what was a rather wild 4 days of mountain forced convection, as storms fired daily with notable concentrations over the High Knob Massif during June 9-12.
June 9-12, 2011
( Areas With Less Than 0.50" Of Rain Inside WHITE )
The Chaotic HIT-MISS Nature Of Summer Convection 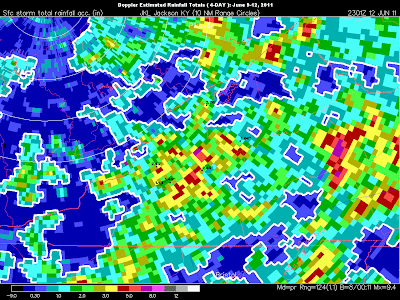 Image Courtesy of Plymouth State University
This left much of the Lee County karst valleys of the High Knob Landform dry as sinking air, or subsidence, from mid-upper level outflow of storms firing repeatedly over the remnant massif worked against thunderstorm formation over Lee County and other locations to the north and south of the massif ( note areas inside WHITE, with blue colors, on the above graphic ).
My friends Otis & Nancy Ward measured 2.78" of rainfall during June 1-11 in the Robinson Knob community of the High Knob Massif, with a little more falling June 12 ( as June 12 storms missed that location ).
My friend Gary Hampton & Staff measured 1.49" of rainfall at Big Cherry Dam and 1.48" down South Fork Gorge, at Big Stone Gap Water Plant, during the June 1-12 period.
My friend Jack Pitts reported a June 1-12 rain total of 2.46" at Appalachia Lake Water Plant located upon the rugged northwestern arm of the High Knob Massif ( Little Stone Mountain ).
My friend Tommy Roberts & Staff reported 1.92" of June 1-12 rainfall in the City of Norton, with 1.17" falling from June 9-12 ( 0.75" fell on June 7 ).
[ All of the 2.46" at Appalachia Lake WP fell during June 9-12, with none during June 7, to again illustrate the large variation in rainfall over short distances between Appalachia & Norton ].
These hand-measured tallies are relatively close to what the Doppler estimated over their point locations, suggesting that MUCH heavier amounts shown in between these locations are likely "in the ball park."
[ The exception being any purple areas on the June 9-12 graphic, or generated by adding in the June 7 Doppler estimated rainfall graphic to the June 9-12 field, as these are likely the result of hail contamination ].
It is most interesting to observe that typically wet Big Cherry Basin was generally flanked by the strongest June 1-12 convection, with intense rains falling adjacent to it along either side of the massif backbone ( especially across the Big Stony Basin multi-gorge complex into Little Stony Basin and adjoining portions of northern slopes of the Guest River Basin ).
[ This type of chaotic, hit-miss convection was largely forced by mountain-gorge driven solenoidal circulations verses that of the synoptic-scale driven orographic forcing observed during November 2010-April 2011 ].
Climate Statistics
For June 1-15, 2011
( Ending During AM of June 15 )
Sunrise Over The Tennessee Valley Divide
The Golden Sun In A Golden Sky - June 14, 2011 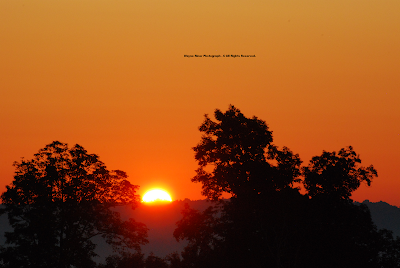 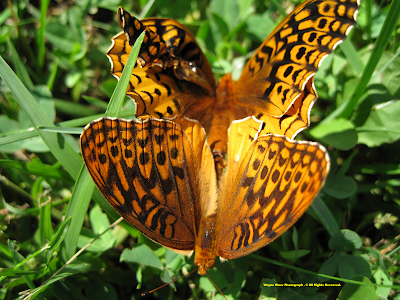 Photograph by Wayne Riner - © All Rights Reserved.
Volatile Pattern Ahead
Features RING OF FIRE
A rather classic summer pattern is evolving for Summer 2011 with a huge dome of blazing HEAT setting up over the southern Plains and Deep South of the USA.
While the heat dome will naturally expand and contract over time, its mean core position should have a tendency to anchor above regions where extreme to exceptional drought conditions are worsening. 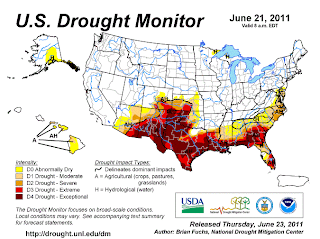 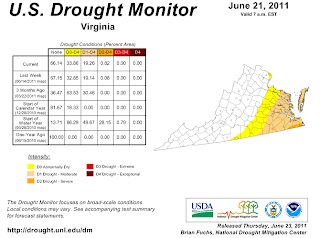 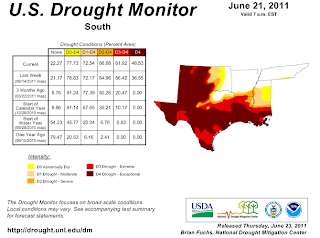 This sets up a battle zone where clusters of thunderstorms roam around the periphery of the heat dome, thus, the "RING OF FIRE" generates a volatile pattern for corridors finding themselves within this active ring of repetitive storm formation.
Southern-central Appalachian climatology dictates that the ring of fire has historically been associated with the following summer threats:
1 ).  Flash flooding via training of torrential rain producing storms.
2 ).  Wind damage events via storm clusters that are embedded in mean NW-W atmospheric flow.
3 ).  A tendency for nocturnal convection to form with expansion of often prolific lightning producing storms.
The meteorological summer period of June-August is favored for the type of MCS & MCC formation characteristic of the high octane environments of these ring of fire clusters.
[ Mesoscale Convective Systems ( MCS ) are most common with occasional upscale growth to the more rare Mesoscale Convective Complex ( MCC ).
These tend to be the most prolific lightning generators on planet Earth and can produce numerous severe weather threats at the same time via their often exceptional tendency toward high degrees of organization ].
The region will tend to come into and go out of the ring of fire zone as the heat dome expands and contracts this summer.  Only time will ultimately tell how long is spent amid this volatile ring of fire.
[ Odds do favor that enough clusters will roam the region to keep the core of blazing heat away, with only intervals of surging temps amid heat dome expansions.
If the ground remains wet in your area that will also temper the heat of Summer 2011, although high humidity levels are likely to compensate for some of this tempered heat ( that = SWEAT ) ].
Posted by Wayne Browning at 10:00 AM