Arctic Blast 2 - ALL About Wind Direction 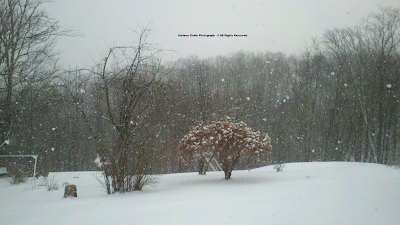 It is all about what direction winds blow when it comes to getting good snowfall if anywhere near the High Knob Landform, and in particular, the remnant massif of its highcountry in orographic forcing situations ( strong winds pushing on the terrain ).


[ I could probably cite hundreds of examples from climatology over the past couple of decades, but this case is a good example for anyone wishing to learn about the intricacies of air flow and orography in the Upper Tennessee River Basin of southwestern Virginia ]. 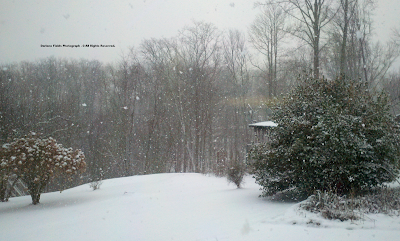 
Unlike the first arctic blast of January 2012 this one came in on ROARING W-SW winds to change the entire flow pattern from that observed with NW low-level trajectories on January 2-3. 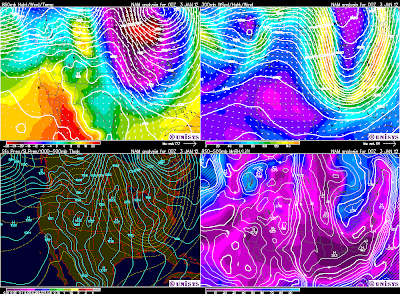 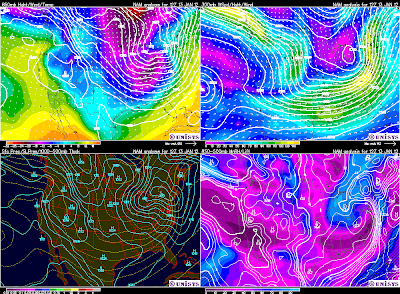 The change in wind directions between these two events changed the shadowing zone lee of the High Knob Massif, with downstream locations lying east to northeast of its highcountry getting little to no accumulations during January 12-13.

[ Extreme southeastern Wise County, northeastern Scott County, and portions of the counties of Dickenson, Russell, Washington, and even Tazewell were impacted by moisture extraction that is more typically directed toward the Clinch and Holston basins of the Great Valley lying south & southeast of the massif into the
Tri-Cities of northeast Tennessee on N-NW air flow trajectories ].


In this modern age of Insta-CAMS the effect of this can be visually illustrated by differences between the towns of Wise and Lebanon. 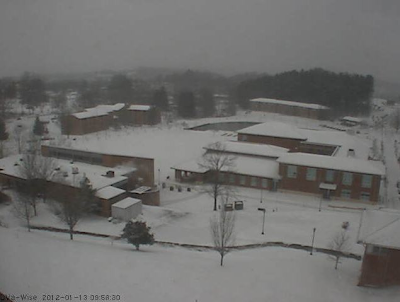 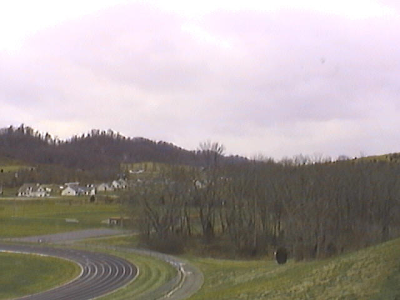 Lebanon High School is located 25 air miles east-southeast of University of Virginia's College in Wise, at an elevation that is some 400 to 500 feet lower in elevation. 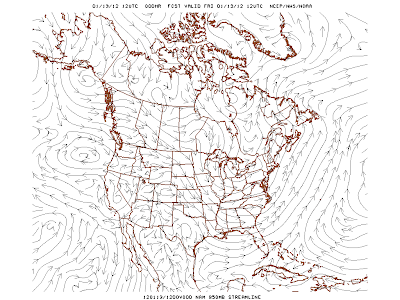 The truly important difference, however, is that Lebanon High rests 29 air miles due east of the High Knob peak and even closer to its sprawling mass of highcountry.

[ A west flow does not have to cross the High Knob Massif to reach Wise, while a SW flow just misses the main core of its highcountry but does have to cross portions of the High Knob Landform ( rain totals on SW air flow trajectories, and sometimes snow, are less in Wise than amid locations within the lifting zone of the massif such as Big Stone Gap, Powell Valley, and the City of Norton ) ].

While a large area E to ENE of the massif had very little to no snow accumulations, Lebanon is being used as an example since the CAM images were available for use from Lebanon High School.

The 850 MB streamline chart above is nice to illustrate flow near the top, or summit level, of the High Knob Massif, while the NASA visible satellite images below show how air flow was rippling away from the massif as a train of orographically forced mountain waves. 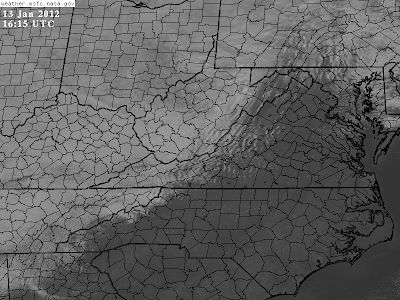 ( Same Image As Above )
Area Of Interest Inside of Yellow Ellipse 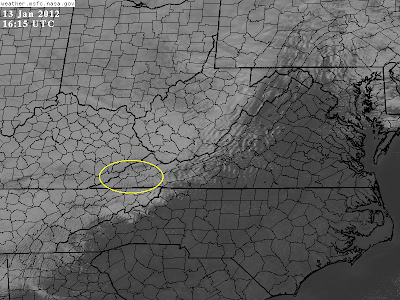 Observe how mountain waves coming off the High Knob Massif and adjacent sections of the Black Mountains are dominating the flow field across southwest Virginia, with axes of orientation of waves denoting general west to east flow. 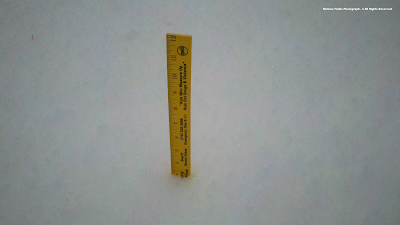 Although big snowflakes continued to fall past 9 AM in High Chaparral, as illustrated by the nice photographs of Darlene Fields above, the heaviest snow fell along west and southwest facing slopes and crests of the massif some 2 to 10 air miles to the W & SW of High Chaparral [ where even the base at Norton WP ( 2342 feet elevation ) had as much snow by 9 AM ]. 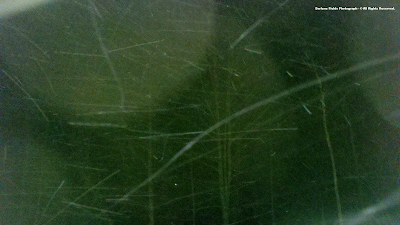 Darlene illustrates why snow is often so hard to measure in the high terrain, with best estimates of its total fall being required in strong wind settings. 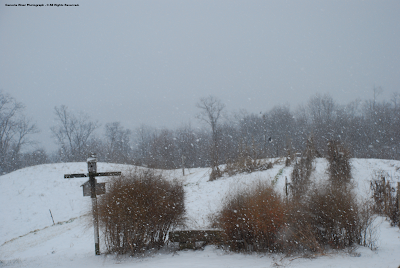 Genevie Riner illustrates big snowflakes at Nora 4 SSE on Long Ridge, where snowfall became heavier once winds turned more westerly such that air did not have to first flow across the sprawling High Knob Massif on WSW-SW wind trajectories. 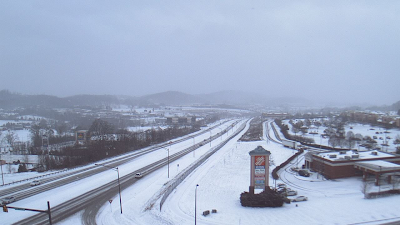 Without having to cross the High Knob Landform and Tennessee Valley Divide, air was able to flow across the Volunteer State into the Great Valley to produce more snow than during previous events this winter season in the Tri-Cities ( * ).

[ Although the official snowfall tally was only 0.7", that doubled the amount which had fallen during the entire season up to this point in time ].

*Climatology shows that snowfall in the Tri-Cities tends to be heaviest on westerly air flows when they DO NOT possess a northerly component and have to first cross the High Knob Massif and high terrain along the Tennessee Valley Divide ( where moisture extraction reduces downstream snowfall production in the Great Valley of NE TN ). 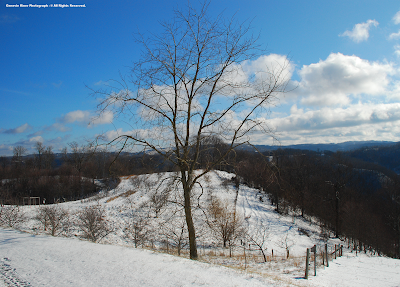 
My friend Genevie Riner illustrates beautiful blue skies following the arctic blast which formed in advance of a fast moving Alberta Clipper system in which snow amounts were all about storm track amid light winds and weak orographics. 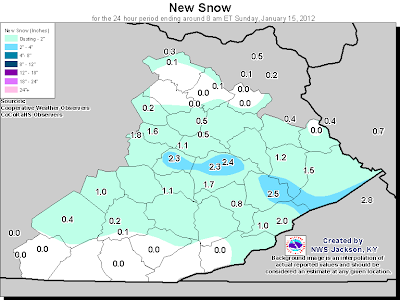 The Alberta Clipper produced the heaviest snow across central-northern Wise, Dickenson, and Buchanan counties along a corridor joining with counties in eastern Kentucky.


This track dropped 2-3"+ in Pound, Clintwood, Haysi, and Grundy to result in one of the relatively rare examples of more snowfall at lower elevations than in the high terrain of central-southern Wise County where only 0.5" to 2" amounts fell in the Norton-Wise and High Knob Massif area.