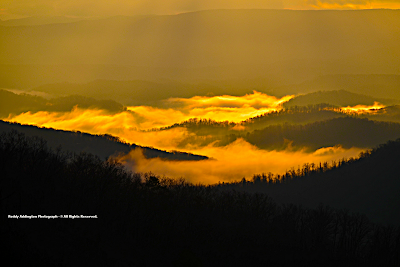 Reference this section of my website to view a gorgeous sunrise series of photographs by Roddy taken last year from this same area near Pineville, Kentucky of the Cumberland Block.


Majesty Of Mid-Winter 2011 In The HKL - Sunrise Series

While January 2012 ended milder than average it was not even close to being the warmest or least snowy on record.


In the High Knob highcountry January temps varied from middle 30s to low 40s above 2700 feet by day to 20-25 degrees at night.

*Essentially all the snow fell during January 1-15 with only a couple of dustings on High Knob during the second half of the month ( 35" to 40" of snow in the main crest zone this season ). 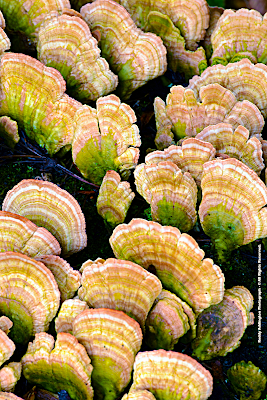 My friend Gary Hampton, Superintendent of the Big Stone Gap Water Plant amid South Fork Gorge, and his staff measured 4.70" of January precipitation at Big Cherry Dam to make 11.32" since December 1 and the start of meteorological winter 2011-12 ( evaporation & snow losses not included ).

This was well below the 6.32" per month average observed at Big Cherry Dam during the past 38 months, and marked the driest month in a year
( since February 2011 ). 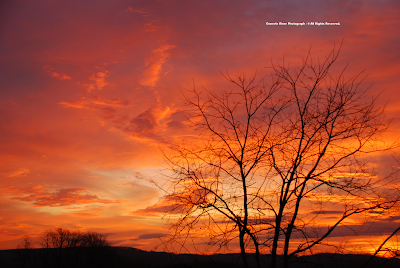 "In spite of it being winter, color is still
there for us to see if we just look."


[ Beautiful mountain wave clouds can be seen in the above photograph as strong SW winds blew across the High Knob Massif and Tennessee Valley Divide ].

Mean west to southwest winds ruled January along with a significant north to south gradient in precipitation amounts that placed the High Knob Landform within a transitional zone of 4.00" to 6.00"+ ( heaviest at its southwest end around Norris Lake ).

Locations lying east to northeast of its massif got the least total precipitation with enhanced robbing of moisture on downsloping air flow.


These precipitation totals were the least reported in far southwestern Virginia, with an increase in amounts from the High Knob Massif south across the Great Valley into the Blue Ridge province.

January 26, 2012
Gorgeous Sunrise Above The Highlands 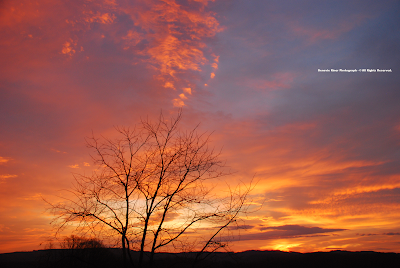 Wow, that is a beauty!


Colder air & much more snow was observed during January 1-15 from the High Knob Massif northward, but snowfall water contents were not great enough to make up for moisture losses on downslope flow in sites with least precipitation.

[ It should be noted that snow cores taken at Clintwood 1 W showed significant rain gage undercatches occurred with the snowfall due to strong winds, such that January totals in places getting 10" or more of snow were higher than rain gage catches ].


Rank Of January 2012
In Climatological History 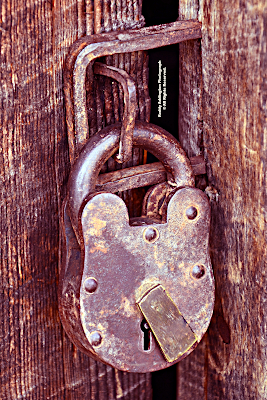 Unlocking the vault of weather records its easy to see that January 2012 was not even close to being the warmest and least snowy on record in the Mountain Empire.

January 2012 ranked in the 20% to 33% range for warmest first months of the year across the area, with some 15 Januaries being warmer in the Clintwood-Wise area during the past 45 years.

They were also much less snowy
as exemplified by:

[ Although much more snow fell on the High Knob Massif during the above Januaries, totals were WAY below average ].

Outside the mountains, amid the Great Valley of eastern Tennessee, January 2012 ranked as the 14th warmest on record in the Tri-Cities and as the 26th warmest in Knoxville.

The bottom line, January 2012 was not even close to being the warmest on record.

The winter season of 2011-12 has been UP and Down, with more UP in the mean to generate mass media cries of "Where Is Winter?"

More seasonal cold during February 8-10 gives way to an arctic blast by February 11, followed again by significant warming next week ( at least, initially ).  Although sounding similar, this is part of a changing pattern toward more extreme weather variations for the eastern USA ( and Appalachians in particular ).

February 3, 2012
Along The Virginia Coal Heritage Trail
The Hidden Church In The Winter Woods - Dante, VA
Photograph by Wayne Riner - © All Rights Reserved.

"Across the railroad tracks, hidden in a small hollow was a church that had once been the center of a coal mining camp.  Now it is slowly giving way to the winter woods."

The climatic system is extremely complex such that no single factor works alone to drive it during any given season. 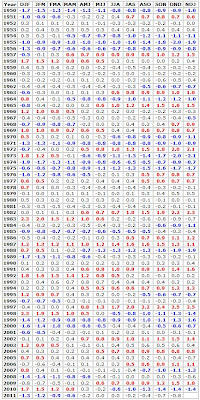 
[ RED color denotes El Nino ( +ENSO phases ) while the BLUE color denotes La Nina ( -ENSO phases ), with all others being neutral ( i.e., neither El Nino nor La Nina were running in the equatorial, tropical Pacific Ocean ) ].

From the above chart it can be seen that the 2010-11 winter season featured a moderate La Nina, or
-ENSO, while this winter is coming in toward the weak La Nina end ( all numbers are not yet in ).

If mildness this winter is only driven by a weak to at best moderate La Nina, then last winter should have been even warmer with its moderately strong La Nina ( i.e., if La Nina was the only major factor ).

The reality, of course, is that many factors work together to force the winter pattern amid this fluid atmosphere.  Like water waves which originate at different points in a pond, the interactions of all these different factors determine the wave pattern which results to dominate any given cold season in any given section of the fluid in question.

Graphs of major teleconnections over time are perfect to illustrate the wave nature of these forcings on the fluid atmosphere.

[ A teleconnection is where a persistent weather anomaly over one region on Earth tends to impact other places far way across the planet.  When a teleconnection is "running" it is typically described as being in a positive or negative phase, with far away influences tending to be opposite in nature as the teleconnection changes phase in ideal settings ( with lag times to full impact ) ]. 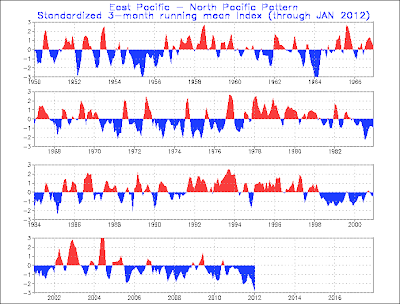 Courtesy of The Climate Prediction Center

The wavy, cyclic nature of the teleconnection known as the East Pacific Oscillation can clearly be seen above as it changes phase from positive to negative. 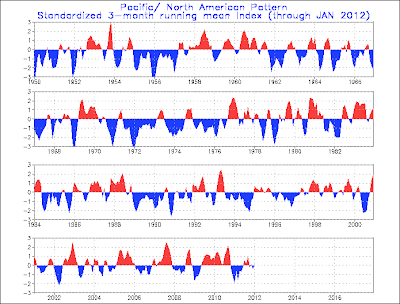 Posted by Wayne Browning at 6:19 PM