Spring In The Southern Appalachians
Splendor of Dogwoods ( Cornus florida ) 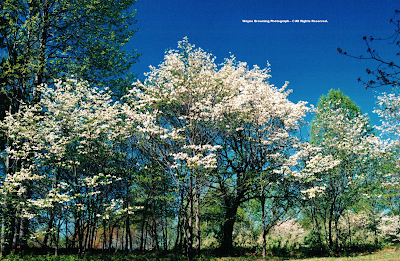 Do without running water for just 24-hours and suddenly the true value of this most precious commodity begins to be realized.

Go weeks, months, even years without dependable water supplies like nearly a billion people across Earth and it becomes priceless!

To put it bluntly, you will die without clean water.  A person can live for weeks without food, but not water!

As the climate of Earth changes there is nothing more precious than fresh water, making water production & supply locations like the great High Knob Landform more important to your life and the lives of your loved ones than ever before.

#Water here tends to be so abundant IN THE MEAN that
it is taken for granted until something comes along to shake things up, like drought years of 1988, 1999, and 2007 or the man-made water crisis of 2005 when Big Cherry Lake was drained to build the new Dam ( which increased holding capacity by 37% ).

Precipitation totals ( based upon automated & storage gages ) in 2007 reached a general 45.00" to 50.00" in the Eagle Knob to Big Cherry Dam and Maple Gap sections of the High Knob Massif. 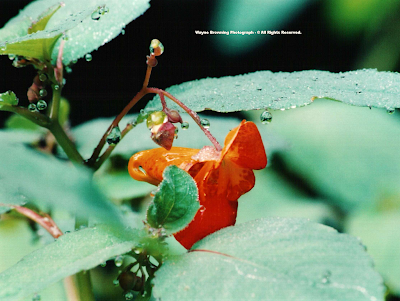 
( * ) - Indicates that total was estimated or partly estimated due to severe winter conditions.

( M ) - Denotes that total precipitation was greater than rain gage total due to evaporation between hand-measurements ( the mean evaporative loss is estimated to have been 3.00" to 3.50" per year as partly based upon observed losses at Clintwood 1 W ) and loss in falls of snow too deep for the rain gage to physically contain ( 4"-diameter NWS rain gage ).

[ All measurements courtesy of Superintendent Gary Hampton and Staff of the Big Stone Gap Water Plant in South Fork Gorge ].

The 6.31" average per month during the past 41 months is the highest mean ever observed in Virginia over such an extended period of time.

[ It is less than what fell, despite a few applied estimates due to severe winter conditions, since 88% of these totals are the raw monthly rain gage values and the 5 applied estimates are low and based upon other rain gage readings in the massif area ]. 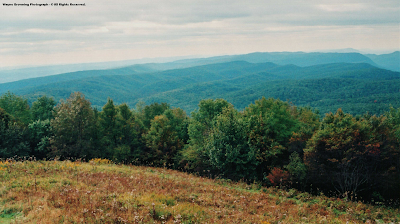 
That is the number of gallons of water that discharged from the Big Cherry Basin and flowed by the Water Plant above East Stone Gap during the October 2011 to March 2012 period of the orographic forcing season!

To put the above in better perspective that is enough water to fill: 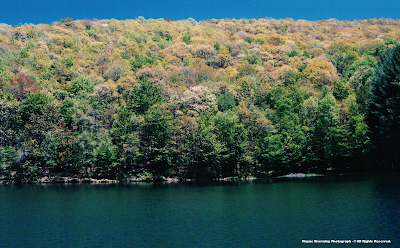 Big Cherry Dam holds back 632.63 Million gallons of water in its 250-acre lake with a mean water elevation of 3120 feet above sea level.

What is not realized by most is that despite 857 Million gallons held on any given day at full capacity by:

water demand in the Wise, Scott, Lee county area is greater than this mountain lake storage.  It is only due to mean wetness, which keeps inflow coming to replace discharge, that there is not a continuous water shortage instead of surplus ( * ).

*These non-water supply mountain lakes are not included in the above calculation:

nor are the many wetlands and private ponds in the massif area. 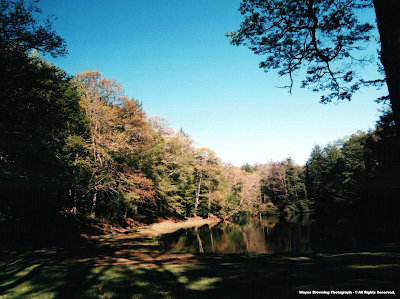 [ High Knob Lake extends well beyond the above view; although, at only 4 acres it is by far the smallest of the five featured lakes upon the massif core ( South Fork Gorge to Guest River Gorge ) ].

The drought year of 1999 was a perfect example to illustrate the above fact. 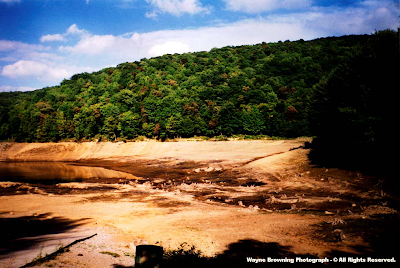 Although considered a severe drought year, 1999 precip totals amid the High Knob Massif area were at or above the 100-year mean for Virginia!

This clearly illustrates that local water demand is greater than storage capacity unless there is a mean surplus of inflow into these precious mountain lakes. 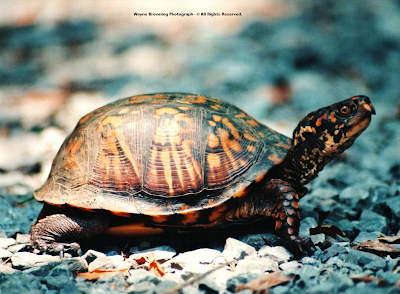 Another way of looking at this, as my friend above is doing, if local annual precipitation averages were the same as the following sites ( for example ).......

there would be a continous water supply shortage in locales served by High Knob Massif lakes ( since demand would be greater than inflow ).

That most years feature plenty of water supply is testimony to the mean wetness of the High Knob Massif.

[ Local storage capacity could, of course, be increased but this is based upon current storage capacity of the main mountain top water supply lakes listed above ( the other lakes not included ) ]. 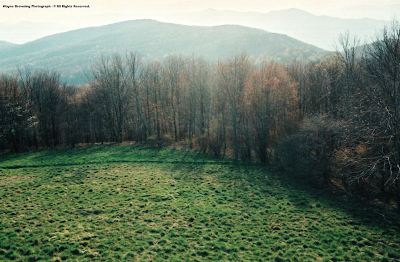 A truly outstanding aspect of High Knob Massif lakes is their extraordinary recharge ability, with typically as much or more precipitation in the five to six month orographic forcing season than falls during an entire year upon many places in Virginia ( but there is more to this than just rain gage precipitation, as will be discussed below about rime & fog drip from massif trees ).


*With at least 0.80" of known loss during the February 19 snow the true total, if possible to measure by hand every day, would have easily topped 40.00" ( moisture from the fog drip and rime deposition on trees is not caught by rain gages and not included ).

In the decades that I have studied this area I have never seen lakes fail to recharge to overflow, no matter how low they were before the orographic forcing season began.

Case in point, Autumn 2005 with building of the new Dam at Big Cherry Lake where going into the forcing season there was nothing but a puddle left in the lake! 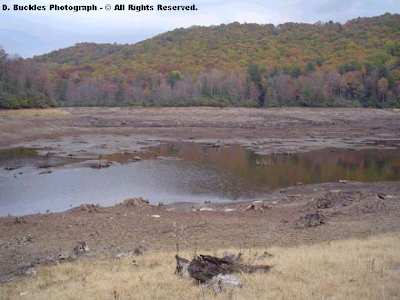 "Run-off from heavy rain and snow melt recharged the Big Cherry Lake, which had been drained during the summer of 2005 to construct a new dam, with a 30 foot gain in water levels being observed since the active pattern began during mid-November of 2005."

A vertical water rise of 30 FEET from mid-November 2005 to mid-January 2006, and the regional pattern during this period was considered to be one of continued drought!

[ Some folks believed it would take years to refill Big Cherry Lake, but they did not know the climatology of the High Knob Massif ].

Recharge of lakes in lofty basins of the High Knob Massif is due to more than just falling precipitation, it is enhanced by TREES and the rime deposition & fog drip which arises from them as moist air is forced to flow across its highcountry.

Big Cherry Basin and much of Benges Basin of the dual Norton Reservoir system sit in the rime zone where trees collect cloud vapor in sub-freezing air and drip fog moisture in above freezing air, adding greatly to the annual water budgets of their water supply lakes and enhancing recharge every year!

[ Due to evapotranspiration trees also enhance precipitation. It is a well known and proven fact that annual precipitation drops when trees are cut.  In extreme cases, as history well records,
loss of trees result in formation of deserts ].

While it is not possible to hand-measure precip every day in Big Cherry Basin, due to its remote location, the NWS rain gage readings that are taken once a week on average have been very productive and part of an extended period of research in this section of the massif.

I use my official NWS station as a control site for Big Cherry Dam, with it being exactly half as high in elevation at 1560 feet above sea level.  Although evaporation and winds are therefore greater at the Dam, to remain conservative I have used my observed evaporation losses to estimate those at Big Cherry by placing an exact replica of the gage used at the Dam beside of my official 8" diameter NWS gage that is measured daily ( * ).

*The only difference is that it has a storage container attached to the 4"-diameter rain gage which can hold contents for a month or more ( the container has a combination of oil + antifreeze to reduce evaporation and prevent freezing during cold months ).

During a 2-year study period the 4"-diameter NWS rain gage caught and held 6.65" less than the 8"-diameter gage measured daily ( there were 18 hand-measurements of the 4" gage during the 24-month period ), for a mean loss of 3.32" per year.

While the rain gage at Big Cherry Dam is measured every 7 days on average, it contains nothing to help reduce evaporation.

[ It is also subjected to much deeper falls of snow that result in greater cold season losses than at the control site elevation of 1560 feet where wind speeds are also MUCH less ].

I will begin this year to measure a 4" NWS gage once weekly at the same time as Big Cherry Dam readings are taken to compare it with my 8" NWS gage measured daily ( to study evaporation losses ).

Meanwhile, preliminary data suggests that the 6.31" mean at Big Cherry Dam during the past 41-months is 0.28" less per month than what would have been observed if possible to measure daily with a 8"-diameter NWS gage.

The bottom line, a general 75" to 80" of total rain gage precipitation has fallen in Big Cherry Basin per year during the past 41-months ( 3.4 years ).

The total water production of the basin has been much greater since it sits amid the rime-cloud zone, with deposition on trees and drip from trees not being measured by standard rain gages.

For additional reading please reference:
( as a few examples from this website )

Rewriting The Climatology Of Virginia 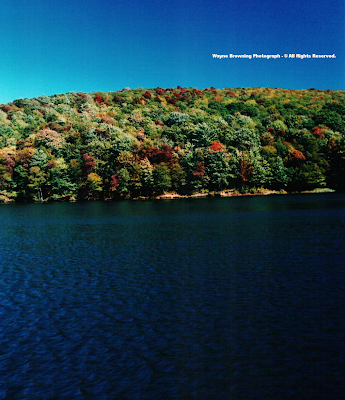 The City of Norton will be draining its upper reservoir in June 2012 to complete work on a new spillway.  While PSA and Big Cherry Lake water will supplement the City, conservation is being asked for during the completion of this project.

Posted by Wayne Browning at 1:40 AM