Summer 2012 - From Chilly To Extended HEAT 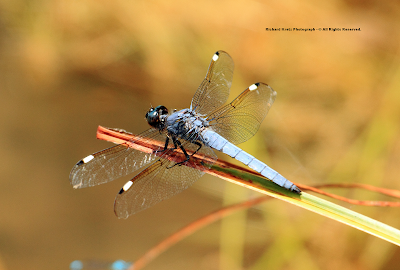 Like a suped up Jet Fighter readied for take-off in a flash, this male Dragonfly is the real deal when it comes to SPEED and is a very important natural predator
( feeding on mosquitoes, flies, ants and other insects ).

On a summer night with temperatures already deeply into the 40s amid mountain valleys it is almost hard to believe that blazing heat will spread east from the central USA into the Appalachian Highlands in just a few days ( by June 28-30+ ).

MAX temperatures only reached the mid-upper 60s in higher elevations of the High Knob Massif during June 26, with a rapid evening plunge into the 40s amid lofty mountain valleys.

( Updated: AM of June 27, 2012 )
Morning minimums reached upper 30s to lower 40s in colder mountain valleys to make talk of an upcoming wave of extended heat only thoughts on this chilly summer morn!

Such cold temperatures are characteristic of summer dryness, with drought years sometimes generating frost in high mountain valleys.  Case in point, 1988 when frosty conditions occurred in coldest locations during both June and July!

While summer dryness promotes HEAT it also supports atypically large day to night temperature spreads which occasionally can generate such nocturnal coldness, especially in high valleys resting amid the 2400 to 3600 foot elevation zone. 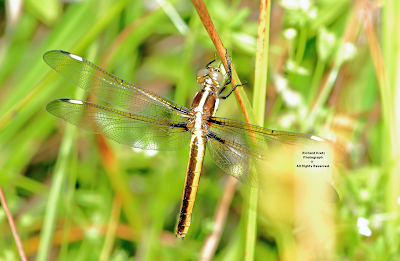 Climatology shows that its hard to get REALLY HOT in mid-upper elevations ( above 2000 feet ) of the area unless there is DRY ground and strongly sinking air to kill all cloud formations and development of showers and downpours in booming thunderstorms.

*While some years may have had more than 1 day at the reported MAX, these were the highest temperatures observed during each year ( missing data was noted during 1984 and 1986 ).
All temperatures in degrees Fahrenheit.

A review of the past 57 years finds that only 15 years, or 26 percent, reached 90 degrees or higher at the official National Weather Service ( NWS ) Cooperative Stations in the town of Wise.

The longest stretch with no 90 degree readings was observed from 1967-1979 when 13 years passed with no temperatures above 85 to 89 degrees.

Annual maximums have occurred as early in the year as May 19 and as late as September 16.

Higher elevations in the High Knob Massif, and along the Tennessee Valley Divide, have lower annual maximums than Wise ( especially above 3000 feet and along northern exposed slopes ).

Some northern slope locations between 2000 and 3000 feet in the High Knob Massif also tend to have lower maximums than Wise due to exposure and more daytime cloudiness & rainfall.

A survey finds that the average annual max on Eagle Knob of the High Knob Massif was 9 degrees lower than observed in Wise, with the highest temperature recorded during the past 11 years
( 2001-2011 ) being 82 degrees ( at 4178 feet ).

Rainfall during the May-June period leading up to this wave of extended heating has generally been below to much below average across the region, with May 1-June 27 totals varying from 3.27" in the Tri-Cities ( TRI ) of the Great Valley to 8.00-10.00"+ amid localized places along the High Knob Massif and highlands of the Tennessee Valley Divide
( 8.50" to 9.00" in the Big Cherry Basin ).

Most Recent Days of Rainfall 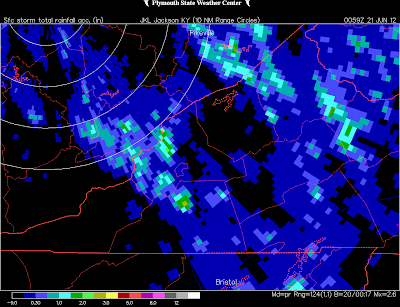 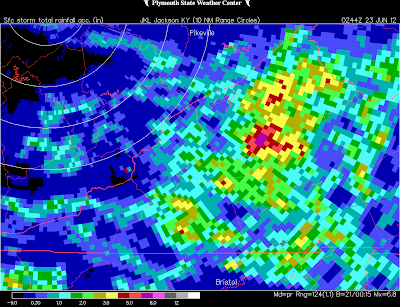 Heavy rains have recently been only hit-miss in nature following the atypical orographic forcing event that closed May and opened June. 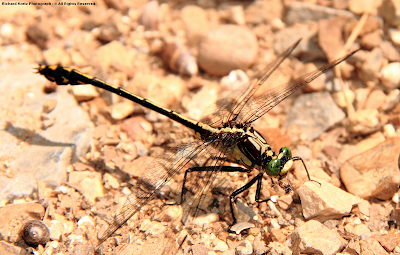 Summer 2012 is yet to prove if it can sustain this short-term dryness since a dry June does not necessarily mean a dry summer ( with a general 30.00" to 35.00" of total precipitation having accumulated so far this year in rain gauges of the High Knob Massif - City of Norton area ).

Other locations in the region have been much drier
this year, with January 1 to June 27 totals of 21.01" in Clintwood of the Russell Fork Basin, 17.99" in the Tri-Cities ( TRI ) of northeastern Tennessee, and just 15.96" along the Ohio River in Huntington, West Virginia.

Compared to recent summers this one is beginning dry in many places with nocturnal coolness and a upcoming HEAT surge that is reminiscent of drought years in 1988 and 2007.

Reference the following for a recap of recent summers:

Wet Summer Across The High Knob Landform In 2009 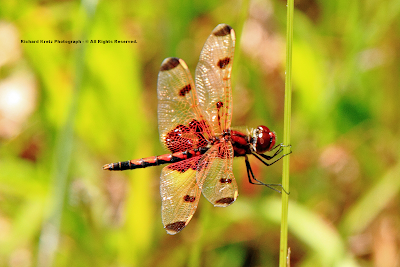 Near Perfect Day
of Surface Heating

Daylight hours of June 28 had near perfect heating conditions with not even a single cloud visible all day across the famed southern Appalachians.

Even the highest summits could not muster a cumulus, with only a few fragments on NASA imagery along and north of the Ohio River and isolated over Kentucky and Tennessee.

A warm layer aloft, known as a CAP in meteorology, combined with strongly SINKING air and a dry air mass to prevent clouds from forming despite some low-level upsloping on breezy to gusty SSW-NW winds across the southern Appalachians ( 10-20 mph gusts ). 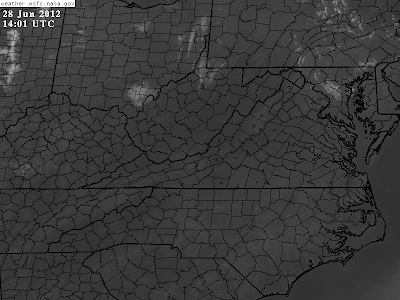 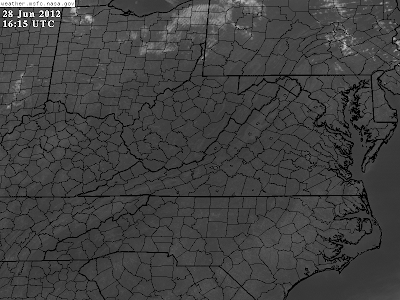 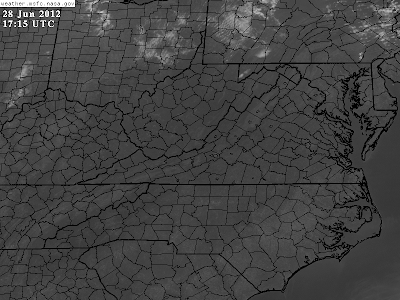 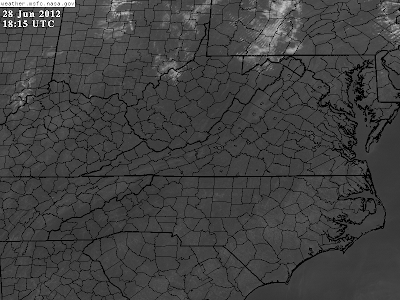 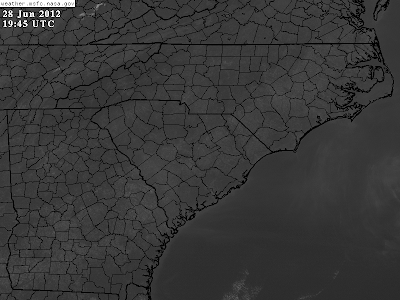 Not many days like June 28 are observed, when intense heating combined with mountainous terrain produces no clouds ( NADA ), none at all, even above the highest peaks!

That such days are rare is one reason why 90+ degree maximums are relatively uncommon at elevations like Wise which benefit from clouds, as well as summer convection or cooling outflows from nearby storms, which typically form above the High Knob Massif and Tennessee Valley Divide during days with intense heating.

General wetness of the High Knob Massif area having
a large impact upon much of Wise, northern Scott, northeastern Lee, Dickenson, and Russell counties during typical summers when the massif becomes a focus of cloud formation and convection which develops outward to impact adjacent locations in the Clinch, Powell, and Russell Fork basins.

Occasionally, as seen on days like this during periods of abnormal dryness or drought, sinking air aloft overwhelms these more typical low-level impacts of the massif area.

Reference the following to gain a better understanding of these important warm season processes that impact summer precipitation amounts in the High Knob Massif area: 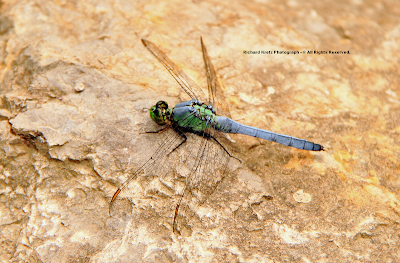 For the second consecutive day temperatures soared beneath cloud free skies and strongly sinking air across most of the Mountain Empire, with blazing afternoon temperatures that are making history by breaking ALL-TIME records! 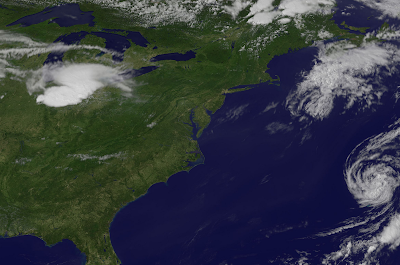 With Debby moving away on far right a new focus of concern was exploding over the Midwest, near upper left of image, with a Mesoscale Convective System ( MCS ) gaining strength and speed in extreme heat and instability.  Sinking air flowing outward from upper levels of these monsters, with clouds tops to 58,000 feet ( 11 vertical miles into the heavens ), was no doubt enhancing local heating via compensating subsidence.

When air rises in the atmosphere it must be compensated for by sinking, or subsidence, such that large thunderstorm clusters and tropical cyclones can add to sinking beneath heat ridges to make conditions hotter than they would otherwise get without them being present ( temps rise when air sinks vertically ). 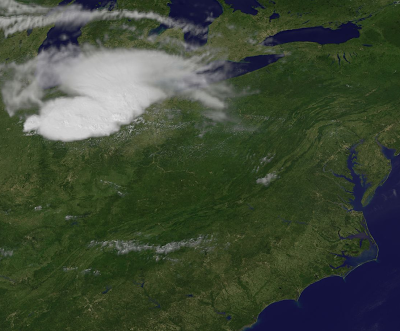 The big picture showing convective clusters forming around a blazing heat dome in a developing "ring of fire." 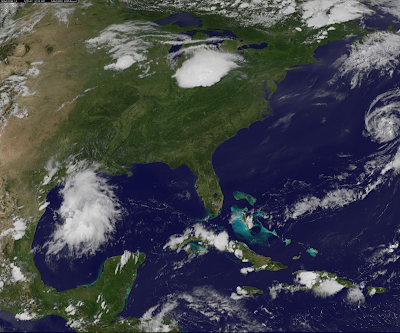 Perhaps the greatest testimony to this vertical sinking was simply extraordinary heating which occurred in mid to upper elevations of the southern Appalachians where Summer MAXS are typically much cooler than lower elevations ( below 2000 feet ).

Weather extremes are always problematic and in this case numerous aspects are developing due to what has turned into exceptional, record breaking heat that produced the highest temperatures ever observed in much of the area during June 29 with  85 to 90 degrees up to near the 4000 foot level from the High Knob Massif to Mount Rogers-Whitetop.  As noted above, simply amazing!

The first of what likely will be numerous thunderstorm clusters fired over the upper Midwest along the periphery of this huge dome of excessive heat, beneath which the ground is baking and nary a drop of rain or even significant cumulus clouds can be found.

The June 29 storm cluster, known as a Mesoscale Convective System ( MCS ) turned into a Derecho as it fed upon extreme thermodynamic instability the likes of which is rarely ever seen in this region as illustrated by a couple of graphics below.

The Definition Of A Derecho 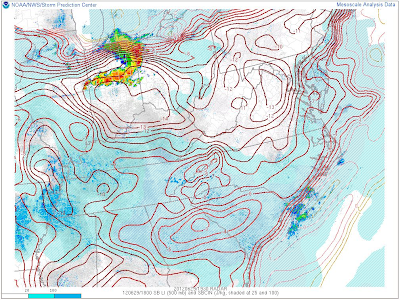 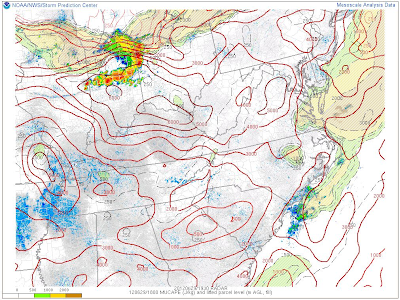 For anyone knowing a little about weather these two graphics are simply incredible, with LI's to under -14 and MUCAPE values of more than 6000 J/Kg centered ahead of the developing derecho.

Although southeastern Kentucky, much of southwestern Virginia and extreme northern Tennessee only got brushed by the derecho it generated a significant outflow boundary that gushed across the mountain landscape with
40-60+ mile per hour winds.

More than 4.3 Million places, from Illinois to the Atlantic Coast, lost electricity during the peak of this event ( hundreds of thousands remain out as of July 4 ).  At least 26 fatalities have been reported. 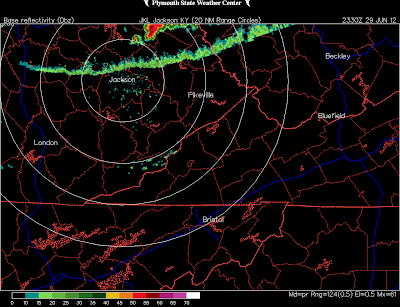 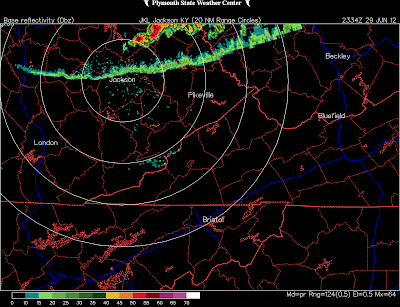 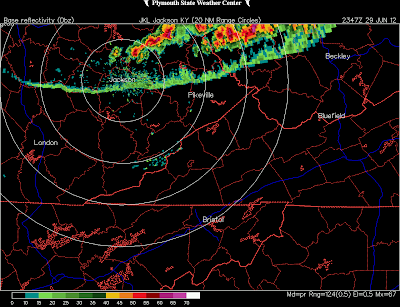 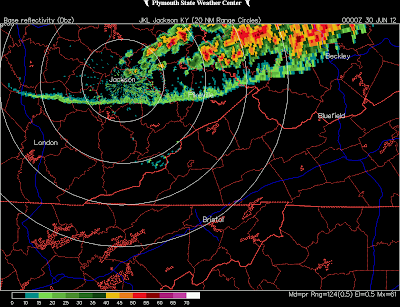 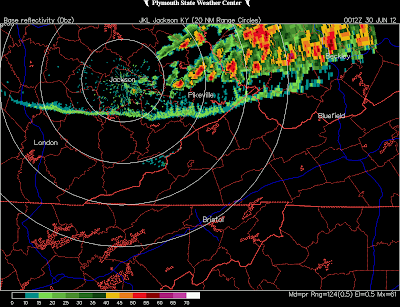 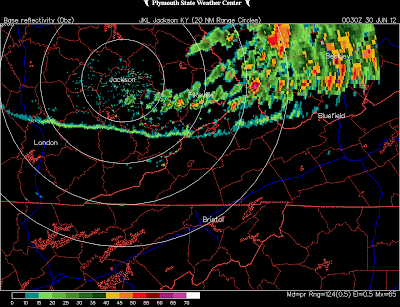 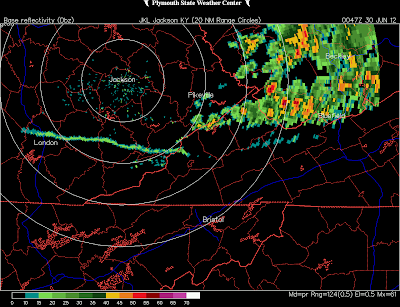 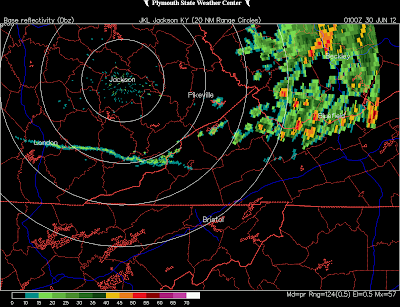 The GREEN LINE above denotes the outflow boundary of this vicious derecho with its gush of ROARING winds.  If the atmosphere in this area had not been so strongly CAPPED and dominated by subsidence aloft it would have generated a HUGE squall line analogous to that which ripped across Ohio and West Virginia where the cap broke.

The thinning and apparent dissipation of the green line above upon crossing into the Virginia mountains being products of its interaction with the higher terrain and the increased overshooting of it by the Doppler with increasing distance from the Jackson, Kentucky radar site ( i.e., the gust front remained stronger for longer than suggested by this time series but was impacted by rugged terrain in the Virginia-Kentucky border area ). 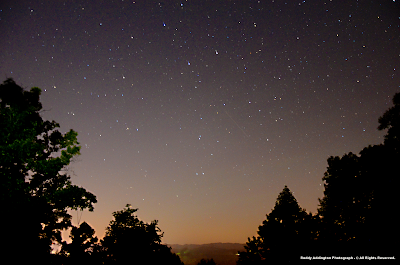 In the High Knob highcountry June temperature means varied from upper 60s to lower 70s by day at highest elevations to mid-upper 40s at night in colder mountain valleys.

June 2012 was a month of great temperature extremes with all-time record heat closing the month to generate a monthly variation of up to 60+ degrees within the massif area ( from upper 30s in colder valleys of mid-upper elevations to near 100 degrees in the hottest, lowest elevation valleys along the ecologically rich Clinch & Powell rivers during June 29-30 ).  Simply amazing! 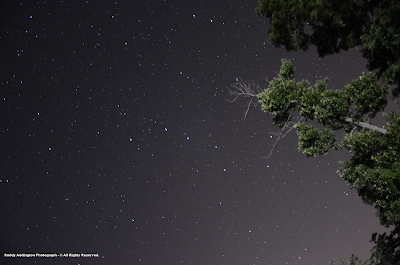 Dawn of the following morning ( June 26 ) produced 40s in cooler mountain valleys, with upper 30s-lower 40s in higher elevation valleys during morning hours of
June 27, ahead of blazing heat. 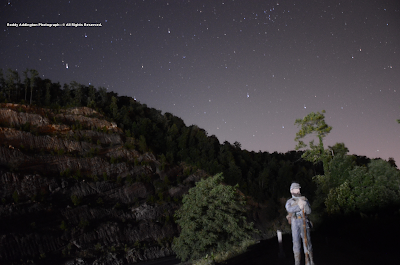 June rainfall was much below average with totals in the High Knob Massif generally varying between 3.00" and 4.00" from the Little Stone-Pickem Mountain flank across the highcountry into the Clinch River Valley of northern Scott County
( e.g., the Big Stony Creek-Fort Blackmore area ).

Posted by Wayne Browning at 2:44 AM