The Colorations Of Autumn 2013 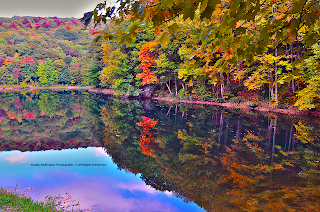 
Photographer Roddy Addington has been adding
to the legacy of another autumn amid the ancient Appalachians with truly gorgeous color shots from mesic, northern slopes of the High Knob Massif.

Early color changes are common at higher elevations,
above 2700 feet, of the High Knob Massif each year.

As of October 8 the best color was found above 3000 feet in the massif with locations from Osborne Rock west to High Knob Lake and the Upper Norton Reservoir, southwest to Big Cherry Lake and Upper South Fork Gorge, showing the most vivid color in birches, maples, ashes, and other mesic species.

Although patches of nice color had emerged in yellow poplar and maple trees on the Wise-Sandy Ridge plateaus, and adjoining high ridges, most places remained muted and devoid of good or significant color ( some places in lower elevations, like the Kingsport, Tn., area, hardly had any color changes ).

Yellow Poplar Leaf-mining Weevils ( Odontopus calceatus ) continue to stress this species in lower elevations and may partly be the result of browning leaves and a lack of yellow colorations.

Along the Appalachians, in general, something bigger may be ongoing as its been years since a widespread display of brilliant colorations have been observed like seemingly used to be more the rule than exception ( i.e., from low to high elevations ).

Color Update - October 15, 2013
A significant increase in both quality and quantity of color changes had spread across all elevations as of October 15, with frosty nights and numerous sun filled days during the past week accelerating color changes.  Peak conditions were found above 2500-3000 feet in the High Knob Massif, especially along north slopes and across high valleys and crestlines where a blaze of color was on display ( a few places passing peak ).

Nice color was also observed in middle elevations across the
Wise Plateau and adjoining high ridges where peak was rapdily approaching.  The least color remained in lower elevations from near Big Stone Gap to Duffield and Kingsport, Tn., where frost had been lacking and morning fog prevalent. 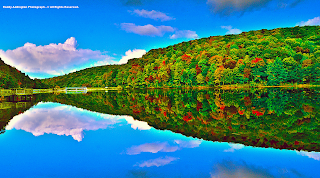 Some leaves were on the water and blowing in air that felt unseasonably mild for early October, even in the high country of the Appalachians ( * ).

*That is expected to change by October 7-8 when significant temperature drops will occur behind a vigorous cold front.  Part of the same system responsible for a historic, early season blizzard in the Black Hills of South Dakota ( as will be highlighted later ).

Daylight hours of October 7 will introduce the chill as temperatures are likely to struggle to break out of the 40s at highest elevations in the High Knob Massif.  As drier air arrives, and gusty SW winds turn WNW-NW and weaken, this will set the stage for frost-freezing conditions into morning hours of October 8 ( especially in mountain valleys of mid-upper elevations ). 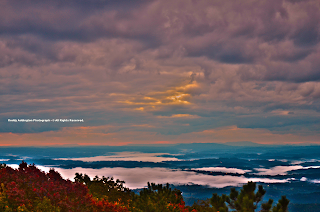 Good visibility in late September allowed Roddy
to capture a beautiful view of several notable mountains rising east of the High Knob Massif across the southwestern Virginia portion of this famed Mountain Empire.

Note a correction on the above photograph has removed the labels for Mount Rogers-Whitetop Mountain which should be visible between Russell Beartown & Brumley from Birch Knob.

When I initially labeled Roddy's photograph I was thinking about how they appeared from the High Knob Lookout.  However, as pointed out by Richard Davis, upon measuring via Google Earth
or ArcGIS the line of sight from Birch Knob would not appear to match them appearing in the same position ( e.g., with respect to Brumley Mountain ) as they do from High Knob ( thanks much to Richard, and sorry for the labeling error! ).

The transition into October was
tranquil during most of its first week. 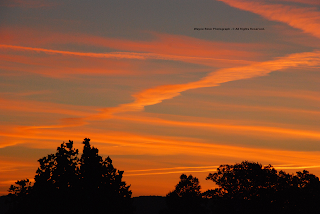 Wayne Riner Photograph Thoughts...
"The pumpkin colored jet contrails brighten the morning sky and give a hint of the coming rain."

*The Average Daily MAX for September was 69.6 degrees
at the Norton Water Plant.

While September featured near average temps, rainfall amounts varied from below to above average ( depending upon location ).

September 9, 2013
Above The Highlands
Majestic Beauty of Late Evening Thunderhead 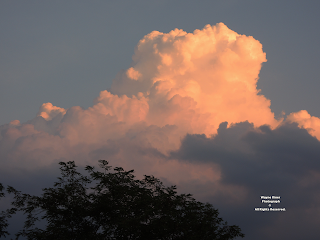 The continued dominance of the rainfall pattern by convection during September was a major reason for varied rain amounts across the highlands.

September 9, 2013
Heavenly Light Illuminates A Giant In The Sky

It was early September when the first blushes of autumn color began to appear in the highlands, with an array of cool nights being observed amid mid-upper elevations, above 2000 feet, over top a persistently foggy layer at lower elevations. 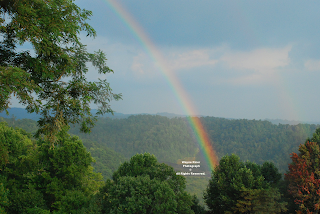 Wayne Riner Photograph Thoughts...
"The light evening rain provided a colorful end to the day. A maple at the edge of the pasture joins in with color of its own." 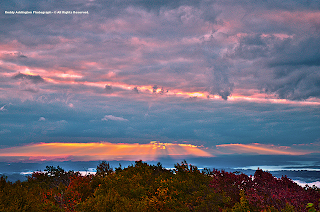 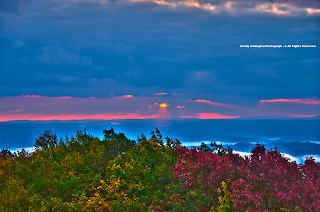 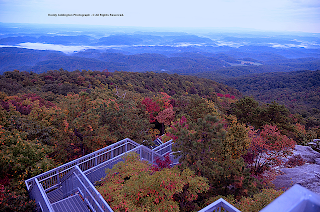 One year ago the big ticket storm was a lady named Sandy which struck near the end of October.

Although October 2013 has a LONG way to go, a big ticket storm wasted little time in leaving its mark on a large region from the Rockies and Black Hills into Tornado Alley of the Nation's Heartland.

From Thundersnow To Tornadic Thunderstorms

These vertical cross-sections are not meant to focus upon any given point, but rather to illustrate the changing nature of the atmosphere between Montana & Illinois during the early evening of October 4 ( after the EF-4 tornado struck Wayne, Nebraska ).

It was a different animal by the time this former monster storm system reached the Mountain Empire late on October 6.

Although the Storm Prediction Center thought about a
possible Severe Thunderstorm Watch for eastern Kentucky,
they decided not to issue.

Observe how the 300 K surface plunges down from a high dome north-northwest of the Ohio River to much lower heights over eastern Kentucky & Tennessee, associated with synoptic-scale subsidence ( sinking ) and drying of air behind the cold front.

Synoptic-scale sinking of air dominated the western side of the Appalachians into evening hours of October 6, as illustrated nicely by this chart of the 300 K Isentropic Surface ( above ).

By 2:00 AM, October 7, small synoptic-scale
rising had replaced the subsidence across far southwestern Virginia and much of eastern Tennessee where rain amounts of 0.25" to 0.50" ended up being well below model projections.

The greatest 1.00" to 2.20"+ rain amounts falling along the Blue Ridge into the New River and Roanoke valleys where a previously ascending atmosphere allowed for more rain ( both synoptic-scale and orographic subsidence preconditioning the atmosphere along the western slopes to receive less rainfall ).

The Theory Of Hurricanes - Kerry Emanuel

Hurricane Hugo was a monster that devastated
the South Carolina coast, and many locations far inland, during the September 21-22 period of 1989. 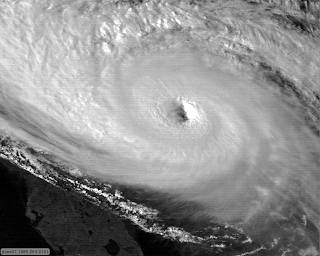 *Note that NARR wind speeds were too low on the reanalysis and
a multiplier has been added to adjust speeds closer to reality on the following graphics ( although, MAX gust speeds were still well above these sustained MPH speeds ).

( Surface Wind Distribution )
The Landfall of Hurricane Hugo In The Carolinas

( Just Over 3-hours Prior to Landfall )

Notable changes in storm structure can be observed in Hugo upon comparing cross-sections through the eyewall region before and after landfall along the South Carolina coast.

( Just Over 2-hours After Landfall )

Question 1
If 1x10^8 ( 100 Million ) Joules per meter squared of energy is required to bring the troposphere into thermodynamic equilibrium with the ocean, how many homes could be supplied energy for 1 year from the Atlantic Ocean ( 106,460,000 square kilometers ) if each household used the reported average of 14,000 kilowatt hours per year?

Question 2
If that much energy is potentially available for tropical cyclone formation, why are there not more hurricanes in the Atlantic Basin? 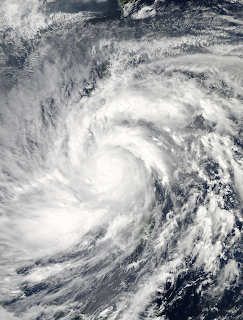 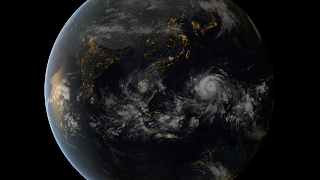 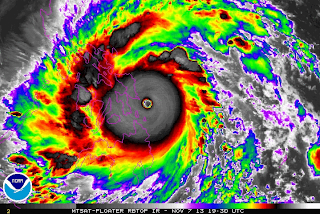 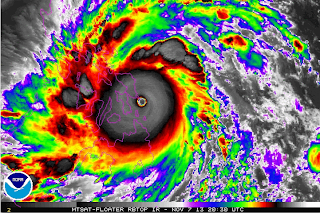 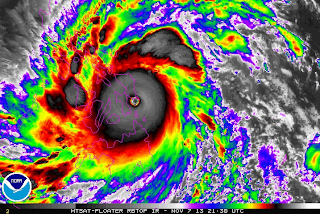 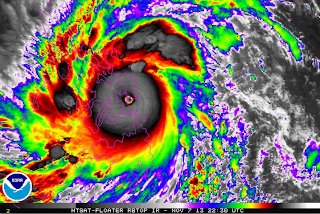 This section is under construction.  Check back for updates.
Posted by Wayne Browning at 8:45 PM