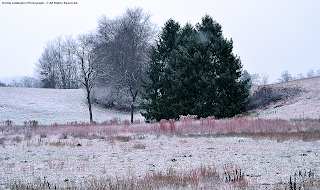 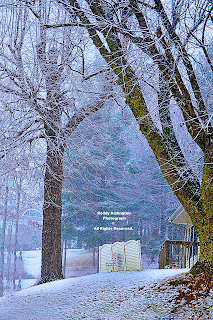 Much more snow and cold air have occurred before, of course, at this time of year, but this blast was notable for a transition which drove pleasant 50-60+ degree temps on November 11 into the 10s and 20s during November 12 ( producing the first 0 to 10 degree wind chills of the season - Ouch! ). 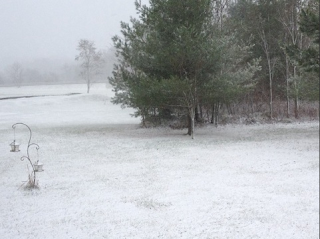 A data sampling courtesy of Wayne & Genevie Riner's weather station on Long Ridge of Sandy Ridge, 4 air miles SSE of Nora and to the ENE of Wise, revealed the change at 2650 feet elevation. 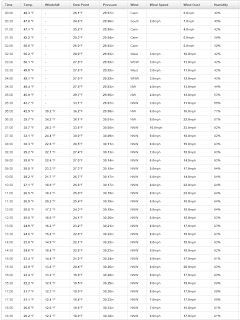 While up to 35 degrees of temperature difference was noted on the automated thermometer, which tends to run 1-2 degrees above the official NWS MMTS system, actual feels-like conditions were 40-50 degrees colder during the afternoon of November 12
verses November 11 when factoring in wind gusts! 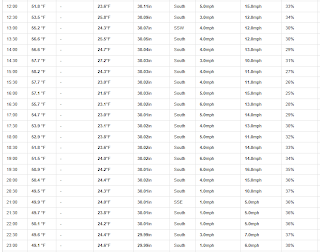 Conditions atop the High Knob Massif and along Black Mountain were coldest with temperatures dropping into the 10s as early as the Noon to 1:00 PM period on November 12, with wind chill factors dipping to around 0 degrees ( on Eagle Knob ). 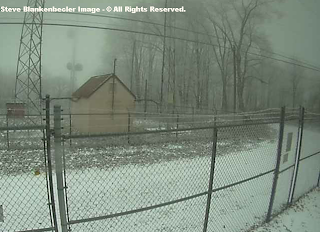 While 1" or less of snow depth was reported across much of the area, especially below 2000 feet, 1-2" occurred along the corridor from Kingdom Come State Park to Breaks Interstate Park on
Pine Mountain ( along the VA-KY border ).

NASA visible images were interesting as the cold air began to
push into the southern Appalachians, with vertically raised clouds highlighting both the mountains and eroded calcareous cores of the Powell Valley Anticline, along the High Knob Landform, and the Sequatchie Valley Anticline in southern Tennessee. 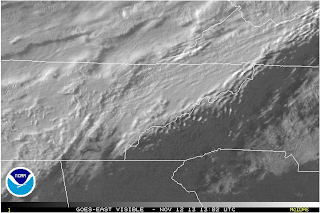 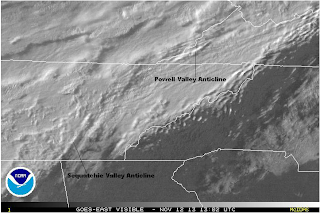 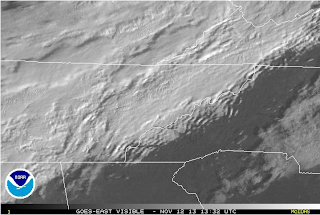 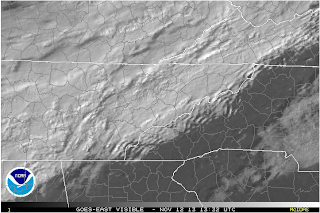 Observe the nice mountain waves ( gravity waves )
that were being generated during this time. 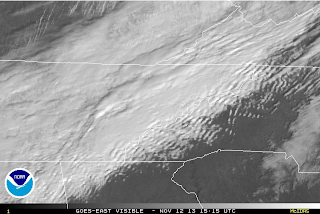 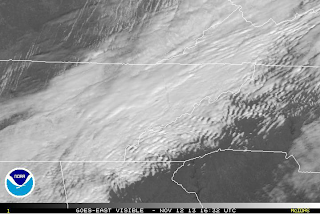 The bottom of this temperature slide was reached with 10-15 degree MINS being reported at highest elevations into November 13 and across mid-upper elevation valleys during AM hours of November 14 ( valley mins often tend to be a day or so later than ridges following strong cold air advection ).

Valley temperatures dropped into the 10s to lower 20s again
into early hours of November 15 ( with increasing high clouds ). 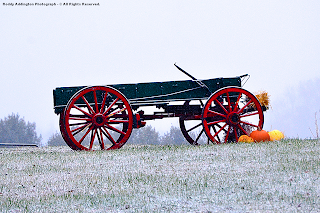 The first half of November 2013 was seasonally chilly and drier than average, with a general
UP and DOWN weather pattern. 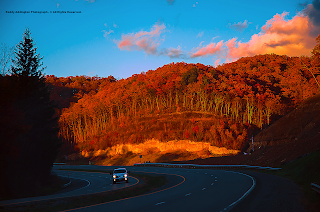 Although past peak, autumn colors lingered
in protected places of lower-middle elevations
into the beginning of the month.

November 1, 2013
Along the Tennessee Valley Divide
Last Colors Of Autumn 2013 On Long Ridge 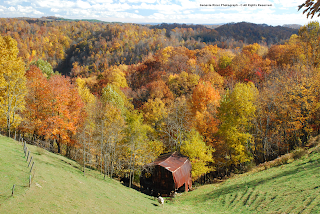 Genevie Riner Photograph Thoughts...
"After the wind and rain, the fall foliage still lingered. The color was later this year up here
on the mountain." 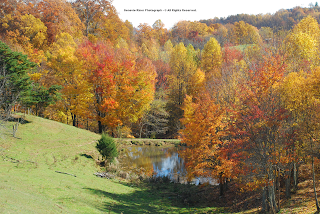 Although subject to tough conditions during the orographic forcing season of November-April ( or October-May in some seasons ), Long Ridge is like many places along the Tennessee Valley Divide and rests amid the thermal belt zone where night-time temperatures tend to be milder than both valleys below and ridges above this elevation zone.

**The Thermal Belt being a favored elevation zone
for Orchards, Wineries, and any frost sensitive crops. 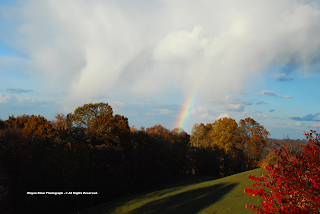 
This section is under construction.  Check back for updates.

Posted by Wayne Browning at 4:07 PM