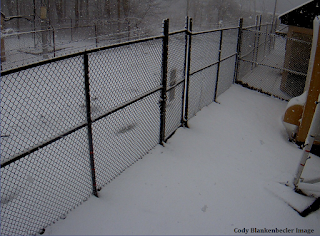 Heavy, wet snow fell at the summit level of the High Knob Massif during the transition from March into April (the period of change from
early to middle Meteorological Spring). 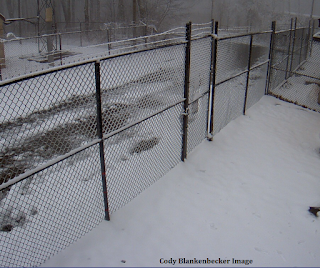 Around 4" fell beneath an upper-level low between sunset 31 March
and sunrise on 1 April.  This was different from snow that fell during
the daylight hours of 31 March when a Thermally Indirect Mesoscale Circulation (TIM) developed to enhance snowfall amounts.

Although snow water content was over 1.00" at the summit level, snow amounts diminished rapidly into lower elevations with little to no sticking below 3000
to 3300 feet. 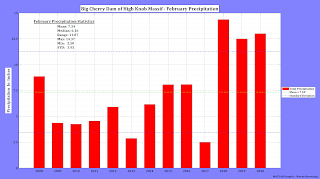 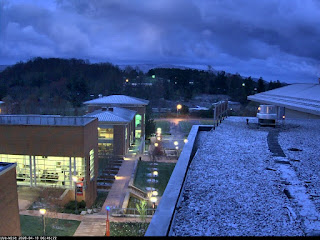 A burst of snow left a dusting in Wise, with a better covering on northern slopes in the High Knob Massif (far background above) into dawn on 10 April.

A torrid precipitation pace has been observed for five consecutive months, with total precipitation reaching 50.00" or more at upper elevations in the High Knob Massif since the beginning of December 2019. 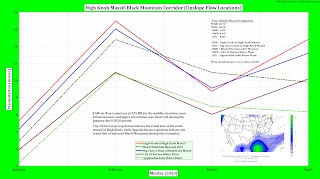 January-April precipitation amounts across the basin heads of Big Cherry Lake, High Knob Lake, and Norton Reservoirs have already exceeded the long-term annual mean for the state of Virginia. 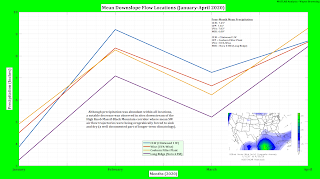 Although abundant, of course, a notable decrease in precipitation within the immediate wake zone of the High Knob Massif-Black Mountain corridor has been observed and is part of well documented longer-term climatology on mean SW air flow trajectories. 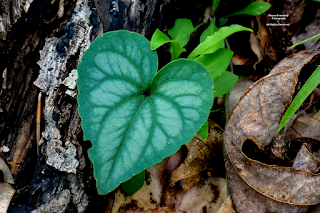 Halberd-leaved Yellow Violets were widespread in the northern hardwoods on my recent research hike into the Big Cherry Basin, where early spring conditions, at best, are on display with only a few maples and other species of trees beginning to bud.  Most new growth, which too remains limited, are vernal wildflowers. 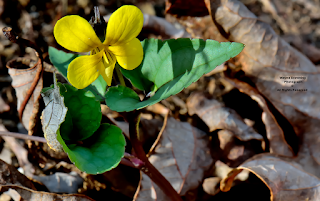 Early spring ephemeral wildflowers are hardy and can with-stand temperatures in the 10s and 20s as they hug the ground and barely poke up through leaves on the forest floor.

More often than not, these hardy beauties
are covered by late season falls of snow.

Yellow Buckeye (Aesculus flava) featured the largest leaves of any trees observed in upper elevations, where they are typically the first to begin growing leaves every year.  They also grow downward in cold air drainages.  Most trees remain bare of leaves. 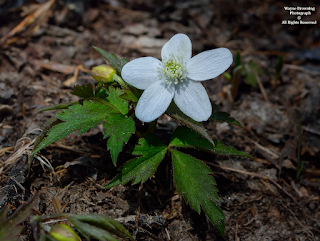 While Canada Mayflower (Maianthemum canadense)
is coming up in spectacular profusion within portions
of Big Cherry Lake Basin and High Knob Lake Basin, none are yet in bloom, with only the Dwarf Anemone observed blooming in Big Cherry Basin.

Since the COVID-19 horror story began I have worked hard on research, which is ongoing through Mississippi State University Graduate School.  If you are going to do research then ideally you want to choose something which either has not been done before or that is ongoing to which you may contribute knowledge. 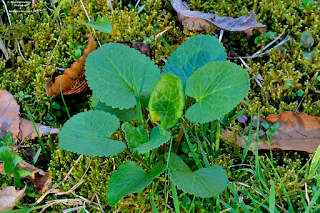 My current project is focused on development of nocturnal cold air pools, especially in upper elevation basins, with very little previous research having been done in the southern Appalachians (USA).

I have always been interested in cold air drainage and formation at night, with only the most classic basins, such as Burkes Garden in southwestern Virginia and Canaan Valley in northern West Virginia, being recognized by previous writing or research. 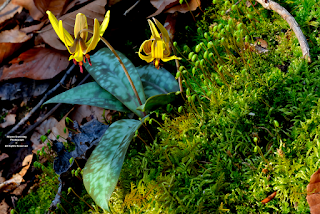 A couple decades ago, I wrote a paper entitled "Domain Of The Cold Places" with a focus on southwestern Virginia that highlighted some
of my initial research on these unique and
climatically interesting places.

While frost and freeze data may be given, and various advisories-warnings issued at different times by NWS Forecast Office's, there are a few places embedded within the mountain landscape where frost and freezing conditions can develop during any month of the year.

Big Cherry Basin generates average mean minimums which are consistently lower than Burkes Garden, such that it would likely fall in between Burkes Garden and Canaan Valley with respect to longer-term summer frost and freezing conditions (longer-term being with respect to recent human history, which is hardly even a flicker in time compared to Appalachian natural history). 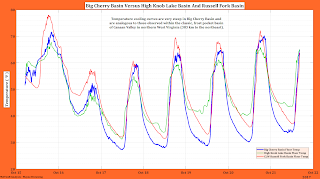 A characteristic feature of basin climatology, more than that of draining valleys, is sharp cooling and warming curves.  Given the opportunity, regardless of general conditions, temperature will quickly fall (even if subsequently rising again) and create downward, nocturnal spikes and temperature fluctuations in the thermographic trace.

CLW (a cold air drainage near Clintwood), located in the more than 500 square mile (1295 square km) Russell Fork Basin, is a site well documented to have rapid diurnal temperature drops.  Yet, by comparison, it can not begin to keep pace with drops in Big Cherry Basin which become nearly vertical under the most ideal conditions. 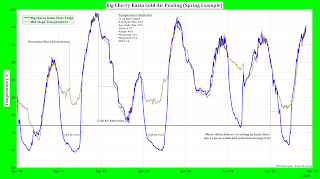 By comparison, the April 1-22 period generated an average daily maximum of 66.0 °F and average daily minimum of 40.5 °F at TRI (Tri-Cities) in the Great Valley of northeastern Tennessee.

While nocturnal inversion formation has high frequency within Big Cherry Basin, conditions are often less than ideal and intermixed with settings featuring air mass advection and other small to large-scale disturbances (some of these have orographic origins and are forced by air flow
across the massif or other mountains). 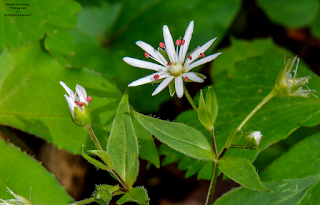 A major motivation for Big Cherry Basin work is to develop a better understanding of how cold air pools can develop within an exceptionally wet environment, given most work related to cold air pool formation has been related to much drier and/or much less biologically diverse environments. 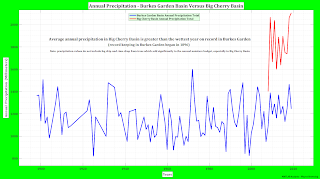 The precipitation regime is so different between these two basins
that plotting totals on the same graph makes them appear to be from different portions of the nation, not from within the same climate division of the Southwestern Mountains of Virginia.

Of particular interest to nocturnal cooling, the average annual precipitation received every year in Big Cherry Basin is higher (much higher) than the wettest year ever documented since record keeping began in 1896 within Burkes Garden Basin (*).

*You must pause to let that sink in, and realize the significance of what this actually implies with respect to climate and biodiversity across southwestern Virginia (knowing that some species prefer anomalous wetness, while others like it on the drier side).

This would suggest colder temperatures in Burkes Garden, given a much drier environment, but that is not the case and conditions are colder in
Big Cherry Basin. 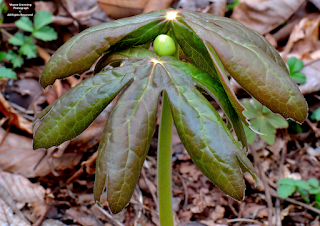 Mayapple is significantly bigger above 1200 meters (3937 feet) elevation in the High Knob Massif than it is within the cold air
pooling area of Big Cherry Basin where it is yet to emerge or
very small in size.

A puzzle to be solved, hopefully in coming years,
is related to why has the lowest temperature ever documented in both Canaan Valley Basin and Burkes Garden Basin reached ''only''
-32.8 °C (-27 °F).

The lowest minimum temperature on record in Canaan Valley Basin also reached -32.8 °C in 1985, between the two NWS cooperative sites (record period from 1944-45 to present).

Ideal cooling conditions in wake of fresh snow
on the morning of 20 February 2015 generated a minimum of -30.6 °C (-23 °F)  at Clintwood 1 W NWS cooperative (CLW), located 34 km northeast of Big Cherry Basin, such that it is nearly certain that Big Cherry Basin dropped to -35 °C (-31 °F)
or lower, cold enough to have established a new
all-time state record minimum for Virginia (**).

**No temperature recording was ongoing in Big Cherry Basin during 2015, but direct comparisons between CLW and Big Cherry Basin
since recording started in 2016 supports the above statement, as does the much deeper snowpack (0.9 to 1.3 meters) present across the
High Knob Massif in February 2015. 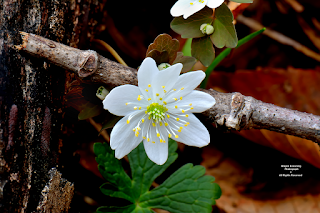 Does this imply that Big Cherry Basin possesses a greater cooling potential with respect to extreme minima?  I think it does versus Burkes Garden and former Canaan Valley sites, but I believe that new frost pocket research ongoing in Canaan Valley will eventually achieve minimums lower than ever observed in Canaan before.

Both Canaan Valley Basin and Big Cherry Basin posses the potential to establish new, all-time state record minimums for West Virginia and Virginia, respectively, if temperature recording can continue through coming years.  It is only a matter of time and persistence. 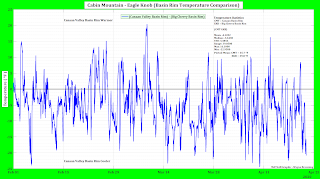 Elevation is, by contrast, a common factor among all three of these Appalachian classics with the basin floor of Canaan, Big Cherry and Burkes Garden all being in the 945-975 meter
(3100-3200 foot) range.

Colder temperatures at 850 mb are, of course, associated with colder surface temperatures, irregardless of it being in an elevated mountain basin or a lowland valley.

Colder 850 MB temperatures, in particular, favor colder minimums in Canaan Valley Basin, with or without snow cover (snow cover being a prime factor for all of these upper elevation basins with respect to extreme minima), and this is observed
in the mean (especially for coldest sites such as
the northern frost pocket DY007 station). 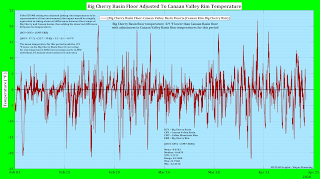 Based upon 11,777 individual 10-minute observations
across the 4 locations used (47,108 total observations)

It should be clearly understood that these comparisons were made in order to better understand the control on cooling potential, not in any "competition" between classic Appalachian frost pocket basins.  They all possess the same "genetic'' composition (geologic DNA) and are all treasured places that must be protected and preserved for the benefit
of all living things, including present and future human generations.

The cooling potential of Big Cherry Basin is significant, and if the 850 MB environment is adjusted to that of Canaan Valley Basin, taking
rim temperatures to be essentially analogous to
the 875-850 MB level (given both rims reach above 1200 meters), then basin floor temperatures of Big Cherry come into alignment with observed values of the northern frost pocket site in Canaan Valley (even slightly colder than it is, based upon only
this single time interval comparison).

Why would Big Cherry Basin floor temperature be as
cold or slightly colder than the Canaan Valley Basin
floor under identical 850 MB conditions?

It might not be on any given night, but in the mean it would tend to be colder due to enhanced sheltering and decoupling from boundary layer flow versus the much larger and much more open Canaan Valley floor which appears to possess an inflection point between decoupling and recoupling that is lower than within Big Cherry Basin
(in other words, a higher wind speed is required to force recoupling on the Big Cherry floor and vertical erosion
of its cold air pool than in Canaan Valley). 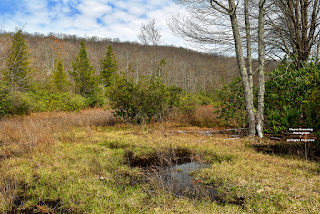 Finally, a nugget for thought.

The afternoon dewpoint can NOT be used as a predictor of the upcoming nocturnal minimum (even in absence
of any moisture advection) within these classic cold air collecting basins (despite what is generally taught in the majority of meteorology classes). 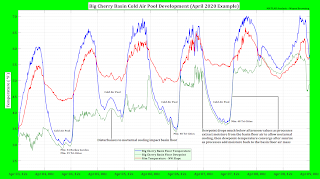 This fact is also largely unrelated to any air flow drainage toward the basin floor, especially after low-level temperature inversion formation when downslope drainage of air flow appears to become a non-factor
to basin floor temperature in Big Cherry (at least, with respect to higher slope air actually reaching its floor). 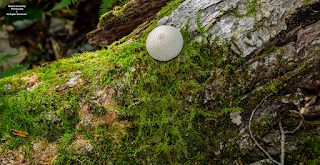 Bottom Line for hikers, hunters, etc...if you plan to explore remote sections of Big Cherry Basin, Canaan Valley Basin or Burkes Garden Basin then you need to be prepared for two climates if near their basin floors (especially if conditions are clear and winds light).

A day-time climate, and their night-time climate with a near free-fall of temperature beginning prior to sunset into the evening when conditions can become cold quickly and catch those unprepared off-guard. 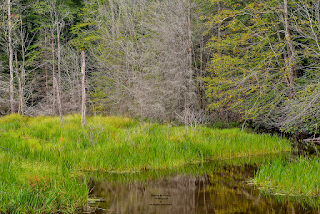 Posted by Wayne Browning at 9:06 PM