Due to Covid-19 the High Knob Naturalist Rally will be virtual during 2020.  Public presentations begin on 26 September, with some highlights from my presentation presented below.

The full video presentation introduces the great High Knob Massif, with many other virtual events available on The Clinch Coalition website and the TCC Facebook page. 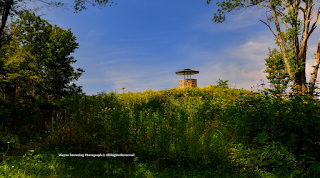 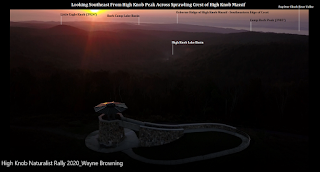 High Knob Lake is nestled within the basin labeled above, with a sprawling and generally lowering crest (courtesy of a E-NE plunging anticlinal axial fold) toward the east-northeast and southeast as the geological structure of the massif changes from a duplex-imbricate tectonic system into a single ramp fault-bend fold to the east.

These frame captures, while not as sharp as the movie, highlight some of the physical features described in more detail during the presentation using photographs I have taken in order to focus upon specific places and features. 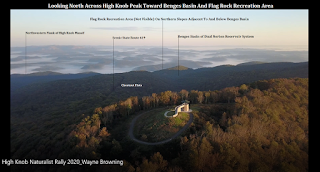 Capture From Brad Deel Videography
The dual Norton Reservoirs are located within Benges Basin, with majestic Flag Rock Recreation Area being adjacent to this basin on the other side (northern side) of the 3520+ foot sunlit peak visible at the above label for Benges Basin.
The sprawling expanse of the crest is one of the physical aspects highlighted here, with High Knob being one of the widest and wettest mountains in the Appalachians. 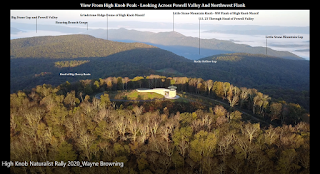 Capture From Brad Deel Videography
The topographic Grindstone Ridge Dome plunges 2000 vertical feet in only 0.8 mile to represent one of the greatest short-distance elevation changes along the western expanse of the Appalachians.
Combination of the first frame, with the next, illustrates a huge crest spreading outward to the southeast and southwest of the peak. 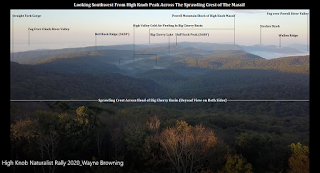 Capture From Brad Deel Videography
Big Cherry Basin generates some of the coldest nocturnal temperatures in the Appalachians, with frost and sub-freezing temperatures already occurring in colder sections (as of 21 September 2020).
The massif contains 16 peaks (locally called knobs) at or above 3600 feet above mean sea level, with 3 peaks above 4000 feet.  Not nearly the highest in Virginia, but certainly the most impressive from a crestal width perspective which contains the most lakes and wetlands of any single mountain-top in the Appalachians. 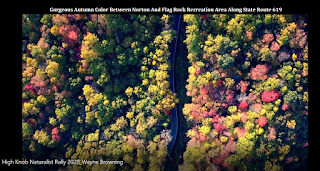 Capture From Brad Deel Videography
"Gorgeous autumn color is driven by the northern forest type and a climate more similar to the Great Lakes and lower elevations of New England than southern Virginia."
Although autumn color is often short and diminished at the summit level, gorgeous colorations are typical of rich forests of the massif which feature some of the earliest color changes in the southern Appalachian region within high basins containing Big Cherry Lake, High Knob Lake, and the Norton Reservoirs.
The High Knob Massif is unique in containing an array of upper elevation basins embedded within its crest, with nocturnal cold air drainage and inversion formation being persistent features throughout the year.  This tends to drive early color changes within these basins,
as well as adjoining and adjacent drainages. 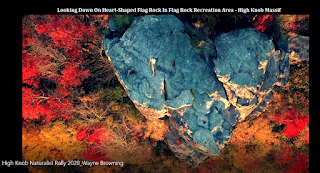 Capture From Brad Deel Videography
The Flag Rock cliff is a beautiful heart-shaped quartz-arenite sandstone tower, but its beauty has been degraded and diminished by ugly graffiti to illustrate why the saying of "leave no trace" is so vital to the preservation of nature's beauty.
Both autumn and winter are prominent features of the presentation, with the majesty of autumn color giving way to frozen clouds of water vapor that act to transform the high country of the High Knob Massif into a vast forest of incredible rime. 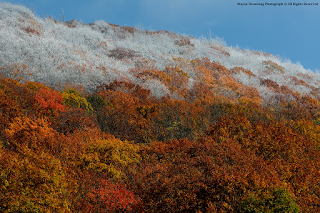 Occasionally Autumn Color And Winter Converge
Snowflakes have flown as early as September, with accumulating snow typical during October.  The deepest October snow being most recently documented by Steve Blankenbecler and Wayne Browning with 30" of depth in wake of Superstorm Sandy (October 2012).
Residents adjacent to Big Cherry Lake were stranded for up to 10 days by impassible conditions along Route 237 following Superstorm Sandy. 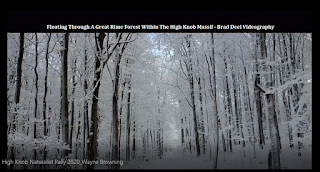 Capture From Brad Deel Videography
Due to its atypical width, and position along the Appalachian Structural Front, rime is an important secondary moisture source (disregarded by some scientists who have not done actual field research on rime) at upper elevations of the High Knob Massif.
The beauty of rime is merely its most evident quality, with its contribution to the annual moisture budget existing even when evident tree deposition is limited as any time orographic clouds are on or above the summit, snowflakes falling to the surface become rimed.  This adds significant moisture content to winter snow cover and snow packs even when drop from trees is limited. 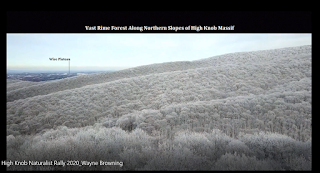 Capture From Brad Deel Videography
The High Knob Massif can be a beast during winter, and is part of the snowiest terrain within the Old Dominion of Virginia (based on collection of snowfall data for more than 25 years).
Tropical Rains To Big Chill
The potential for heavy to locally excessive rain amounts will need to be closely monitored during a year which has been extremely wet and has already generated locally significant flood damage. 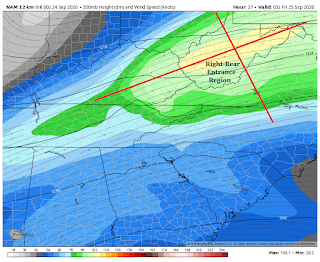 Tropical moisture being lifted into the right-rear entrance region of a mid-latitude jet streak is often indicative of a heavy rainfall event with divergence aloft and enhanced upward vertical motion.  Enhanced low-level convergence focused by orography is an added concern in these situations along the mountains.
Those living and driving along streams and in poor drainage, flood prone locations will need to remain alert for the potential of significant water level rises during 24-25 September 2020.
Although more tropical moisture will spread rain across the mountain landscape yet again during the 24-25 September period, as remnants of Beta pass across the southern Appalachians, an autumn transition has already occurred. 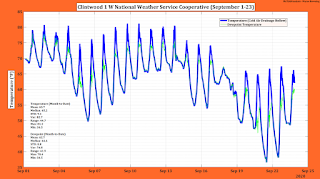 Note that the mean temperature drops by 10.5 degrees (F) between September 1-17 and the most recent September 18-23 period, with an 11.6 degree drop in mean dewpoints, as max daytime temperatures do not climb above 67 degrees (reference next graphic).
Even in lower elevations of the mountains, at Clintwood, this change has been very evident and noticeable, with brief early September coolness giving way to nearly a week (as of this post) with daytime maxs in pleasant 60s (mainly 50s by day within upper elevations of the High Knob Massif). 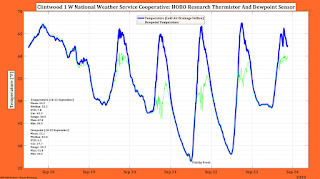 The first sub-freezing wind chill factors were also documented during this period, with 20s at summit levels of the High Knob Massif and adjacent Black Mountain.
The first frost of the season occurred during the 21-23 September period, depending upon the valley location, with coldest places featuring sub-freezing conditions from portions of Big Cherry Basin in the High Knob Massif to Burkes Garden Basin.
The Glades of Western Maryland

Josh Brenneman Photograph
The first freezes occurred during 15-16 September within the northern Canaan Valley Basin, and other cold pockets to the north, as well documented by my friend Josh Brenneman of Allegheny Mountain Weather who always does a simply outstanding job documenting conditions across western Maryland and northern West Virginia.

It is now time to begin looking more closely at global teleconnections, with respect to winter patterns, and models are generally in excellent agreement with development of a pattern that will feature unseasonably cold air by early October.

A strongly positive PNA and negative trending EPO are nearly always a good combination for cold air in the eastern USA of North America during this time of year, with additional support for cold coming from development of a negative AO, negative to neutral NAO and negative WPO (not shown).

A pattern like this could easily support the first flakes of snow along the Appalachians, and most certainly will tend to create an atmospheric setting that is favorable for the first widespread frost and freeze of the season.  A big chill is coming!
High Knob Massif
Precipitation Update
(Totals Listed By AM Measurement Format)
Monthly Total Precipitation
Big Cherry Lake Dam
(Elevation 3139 feet)
2019
January
6.14"
February
12.50"

1 June 2019 to 25 Sept 2020: 126.52" (M)
(M): Some missing moisture in undercatch and frozen precipitation, with partial corrections applied for the 24.4 meter (80 feet) tall dam structure where rain gauges are located.  Corrections are based upon 86-months of direct comparisons between NWS and IFLOWS at Big Cherry Dam (including occasional snow core-water content data). 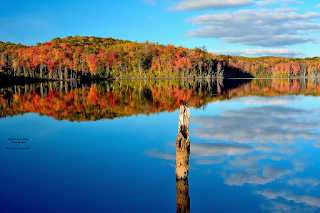 Wayne Browning Photograph © All Rights Reserved
New Precipitation Record
Big Cherry Lake Dam of the High Knob Massif received 100.29" of total precipitation (not including
fog drip and rime drop from trees) during the water
year from October 2019 to September 2020.
(As of 30 September 2020)
Water Year Precipitation Record
Big Cherry Lake Dam
October 2019-September 2020
October 2019
5.01"
November 2019
5.20"
December 2019
8.52"
January 2020
7.15"
February 2020
13.01"
March 2020
9.55"
April 2020
11.59"
May 2020
8.73"
June 2020
7.48"
July 2020
9.72"
August 2020
8.12"
September 2020
6.21"
***Total: 100.29"
***This is a research total.  It is not considered official, with no official National Weather Service (NWS) station at the Dam, even though it is based upon 4"-diameter NWS rain gauge and tipping-bucket amounts adjusted for the 24.4 meter tall Dam site.  The objective being to have precipitation totals as accurate, or more so, than obtained by daily
hand-measurements with a large, 8"-diamter NWS rain gauge.
Wetness Rules The High Knob Massif
Read about rain gauge undercatches and how this started
Although performed independently, using different gauge types, it is notable that the correction used is approximately the same as that found by Boris Sevruk during a similar Multi-year Study in Switzerland.  Boris was my mentor at the beginning of precipitation research.
During the previous 11 water years (October-September) the total was greater than 71.00" during every water year except for the 2013-14 year when 60.56" were observed (75.20" mean during 12 years).
(High Knob Peak on Far Horizon)
Big Cherry Lake of High Knob Massif 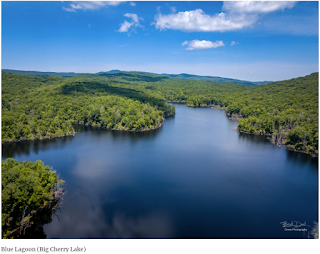 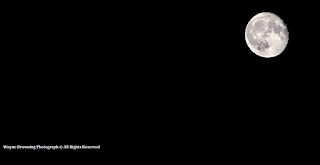 Wayne Browning Photograph © All Rights Reserved
Highlands around the Sea of Crises, on far upper right of the Moon, appeared to jut outward into the darkness of space as lowlands disappeared into blackness during early hours of
4 October (above the Cumberland Mountains, USA).

Posted by Wayne Browning at 2:21 AM