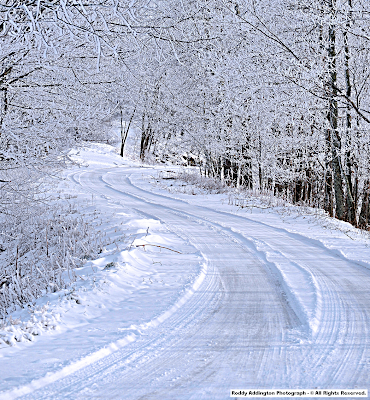 The first significant snow event of the 2009-10 winter season spread a sparkling blanket of pristine whiteness across the rugged mountain landscape during December 5th.

Snowfall totals of 6-7"+ were common at higher elevations of the massif, above 3200 feet, with local drifting.

RIME & Hoar Frost combined with snowfall to transform the High Knob highcountry into a true and ultimate wonderland of wintry scenes, as so beautifully captured by photographer Roddy Addington on the morning of December 6. 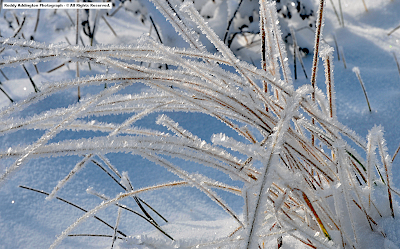 As skies cleared temperatures plunged to frigid levels over the snowpack, with single digits and teens being felt by sunrise on December 6.

The coldest conditions developing in high basins of the massif, with valley floors sitting at 2400 to 3600 feet above sea level, such that every bit of moisture became part of a world of frozen crystals! 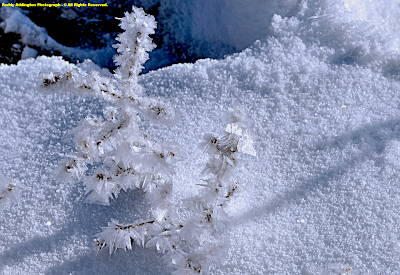 Viewed up close, crystalline swirls around a stem take on forms of miniature Christmas Trees made of frozen water vapor.


The true, awesome beauty of winter in the highcountry takes on so many amazing forms.

Consider, for example, this truly magnificent transformation of an umbel of a former wildflower that has seemingly been brought back to life by a crown of crystalline jewels! 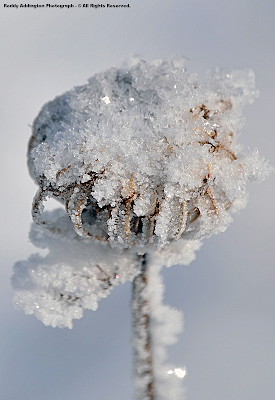 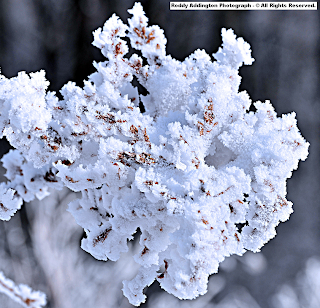 The December 5th snowfall event was fast moving with generally light winds that acted to reduce orographic forcing, riming, and drifting of snow ( although significant across the highlands ).

An important factor during this episode was infiltration of cold air into windward facing slopes and crestlines of the great High Knob Landform and Tennessee Valley Divide.

The result was ALL snow, even amid the lowest valleys, from the High Knob Massif northward into lower and middle elevations of Wise & Dickenson counties.

[ By contrast, warmer temperatures leeward of the High Knob Landform, and some of its high crestlines, allowed precip to begin as rain within portions of the Clinch and Powell River valleys, in locations such as Duffield, Jonesville, and Fort Blackmore ].

Wintry beauty was captured amid the highlands of southern Dickenson County by photographer Wayne Riner, where 5" of snow depth were measured on Long Ridge of Sandy Ridge. 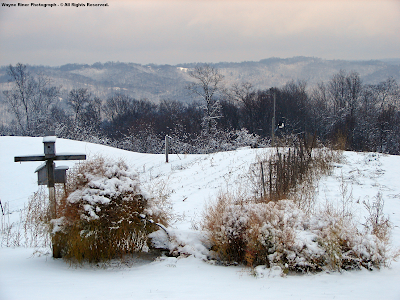 
For those not familiar with the great High Knob Landform, and its adjoining Tennessee Valley Divide, the following photo by Wayne Riner truly exemplifies the sheer STEEPness of terrain within this portion of the southern Appalachians!


[ How about climbing up and down that slope EVERY day?  No, we are NOT one short-legged hillbillies.  We are very PROUD and independently tough-minded MOUNTAINEERS! ].

A scene of great autumn beauty which was so gorgeously captured during October 2009 was duplicated at Smith Cemetery on Long Ridge during December 5.


To refresh your memory, as to what this exact same scene looked like during October, please reference the following section of my website: http://www.highknoblandform.com/2009/11/wetness-rules-high-knob-massif.html .

Scroll down to Outside The Lifting Zone, and look at the first photograph entitled: "Golden Maples and Yellow Poplars."

[ Perhaps we may get Wayne to also take a view of this during Spring and Summer, for a composite of the four distinct seasons which makes this part of the world so amazing! ].


As you view this pictorial history of the December 5th event, something very interesting emerges for those with sharp eyes!

Trees across the highlands of southern Dickenson County are largely devoid of snow, with only those most sheltered from the wind sporting a coating
( such as those on the leeside of ridges ).

Lying within the 2500-3000 foot elevation zone, or in the middle elevations, the highlands of southern Dickenson are generally below the RIME formation zone during many events.

This once again illustrates the difference between RIME and SNOW, as rime thrives in wind, growing into it with great vigor as air flow becomes stronger and more moist.

[ Long Ridge and adjacent locations along the Tennessee Valley Divide, such as the Wise Plateau, get into the RIME formation zone occasionally when cloud bases drop very low in sub-freezing air for prolonged periods of time.

During many events, however, the rime formation zone remains at elevations of 3000 feet or above ].

In mountain valleys, north of the High Knob Landform, the lack of wind allowed snow to thickly coat trees along rivers in northern portions of Dickenson County. 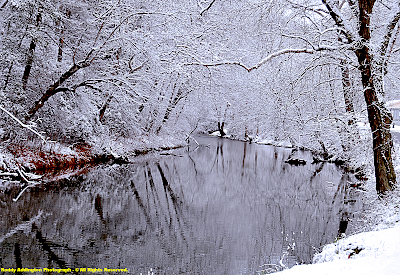 
Sheltered mountain ridges in the lee of Pine Mountain, seen stretching along the horizon of northwestern Dickenson County in Roddy's photograph below, were also heavily coated with snow. 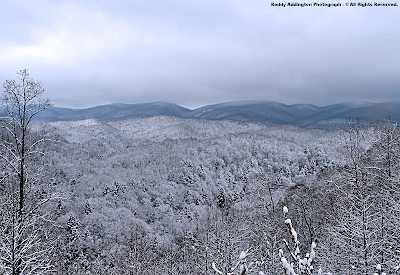 
[ Thus, a rather interesting distribution occurred from TOP to BOTTOM, with RIME coated trees above 3000 feet, mostly bare trees between 2000-3000 feet, and snow coated trees below 2000 feet ].

A rather classic country scene, typical of our rustic mountain heritage, was captured in the historic Skeetrock community of Dickenson. 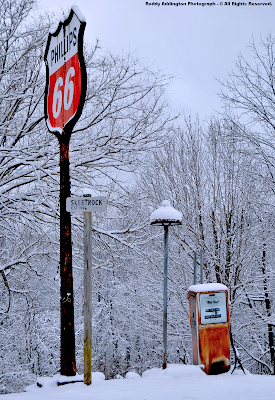 
As the weather pattern began to transition toward another MAJOR storm system, with HIGH winds and heavy rainfall, a simply STUNNING array of cloud formations were captured above Wallen Ridge in Lee County by Harold Jerrell. 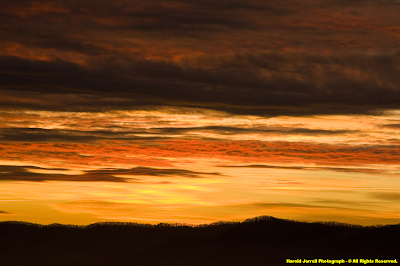 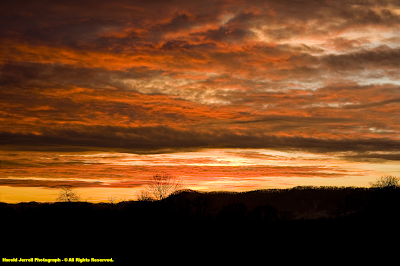 
Are these not just heavenly! 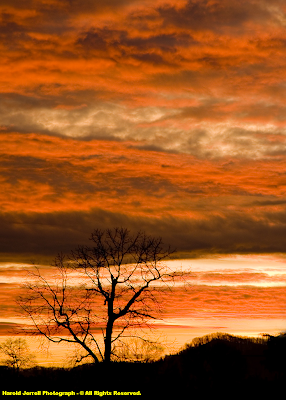 That shot is a KEEPER!

A special thanks to everyone who measured snow depths during this event and, of course, to each of the fantastic photographers who made this update so glorious!