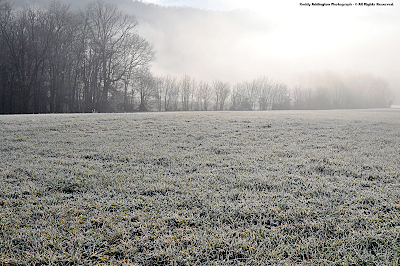 The dawn of December 2009 was greeted by a frosty, cold fog on the floor of majestic Powell Valley, as air drained outward from South Fork Gorge of the High Knob Massif.

High clouds streaming far ahead of the first important Gulf of Mexico storm system of the winter season, could already be seen above this frozen setting. 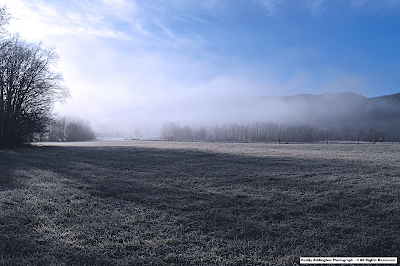 Fog vapor oozing outward from South Fork Gorge encased dormant winter vegetation within ice, in a manner somewhat reminiscent of the much more abundant vapor which coats highcountry trees with RIME in sub-freezing air ( although via much different atmospheric processes ).

[ Rime coated the highest elevations of the High Knob Massif into the morning hours of December 4, with freezing drizzle down to below 3000 feet in elevation.  A more substantial rime event was just starting to take shape during the evening of December 4 ]. 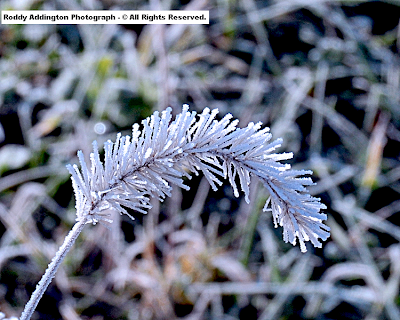 The above is sometimes called Hoar Frost, and produces a heavier deposition on objects than typical frost due to the presence of greater amounts of available moisture. 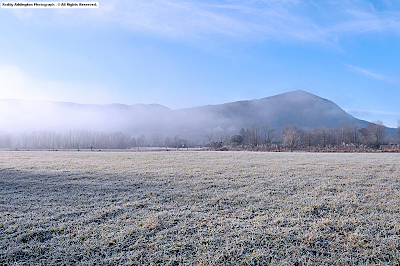 Tranquility associated with this wondrous mix of  fog vapor and frost would prove to be relatively short-lived, as storm clouds surged across the mountains on ROARING SSE-SE winds during December 2.

Wind speeds of 30-60+ miles per hour were common across the area, with Wayne & Genevie Riner clocking a 56 mph gust from the SSE on Long Ridge at just after 1 PM ( sustained speeds reached 35 mph ). 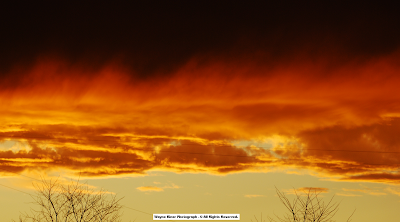 That high winds became especially prevalent during a break in the steadier rainfall, indicated that enhanced downward transport was aiding the process ( with locally energized turbulent mixing via the breaking of orographically generated gravity waves leeward of mountain crestlines ).

Photographer Roddy Addington reported that wind gusts were exceptionally strong on the open floor of Powell Valley, in the area of his frosty fog photographs above, which suggested gravity waves lee of the High Knob Massif were aiding downward transfer of high momentum air ( especially given that is a documented wave cloud formation zone on SE winds ).

Dramatic skies, complete with multiple rainbows, made for a memorable setting amid this high wind event. 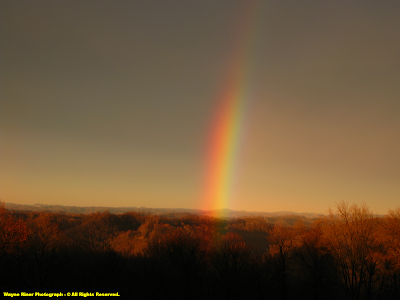 Dramatic double rainbows were also captured by photographer Wayne Riner during the rainfall break, in advance of a secondary line of powerful winds and rain ( with embedded thunder ). 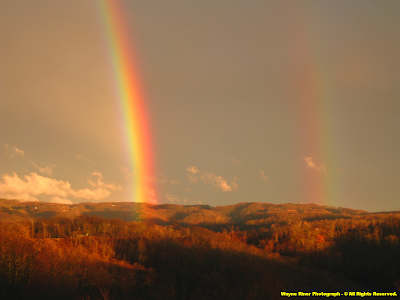 A peak wind gust to 55 mph, out of the SW, was clocked on Long Ridge with the evening activity during December 2.  A prolonged period of ROARING SW winds followed, post-frontal, with gusts to around 40 mph being measured at Lonesome Pine Airport in Wise into the early hours of December 3.

[ Numerous reports of tree and localized structural damage were documented across Wise County and adjacent localities ].

Although this event was relatively short-lived, orographics also had a distinct impact upon rainfall distributions into the windward slopes, and leeward zones, of the High Knob Landform ( HKL ) and adjacent mountain divides.

While Doppler radar from Jackson, Ky., is a little skewed, it had the best look at the event and reveals the most accurate rainfall estimations verses reality. 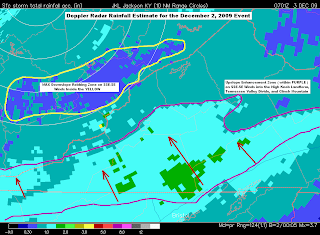 Rainfall totals of 1.00-1.50"+ were generally estimated across the High Knob Landform, and within the zone approaching it from the southeast.

[ The JKL Doppler beam hits HIGH in the atmosphere to the southeast of the HKL, so not all of the rain it indicated reached into the Clinch and Holston River valleys.  However, the Doppler was detecting the enhanced rising motion generated within the atmosphere as strong SE air flow approached the HKL and its remnant massif of highcountry surrounding High Knob.

In fact, it is no accident that the max Doppler estimated 1.50"+ amounts are concentrated upstream of where the High Knob Massif sits!

Of additional interest, winds were so strong with this event that there was a bit more leeward drift of rainfall elements, so that totals within the depths of Powell Valley and the Norton Valley were greater than are sometimes observed during pure SE flow "warm" events ].

A point measurement made by Elizabeth & Addison Stallard, in the Head of Powell Valley of the High Knob Massif, found 1.01" of rain falling almost exactly upon the northwestern edge of the solid 1.00" isoline shown by the Doppler estimate.

By contrast, a hand-measurement made in Whitesburg, Ky., within the YELLOW max downslope zone, found only 0.32" of rainfall.

[ The downslope zone also includes much of Dickenson County, but in this case the MAX downslope on SE winds typically occurs within a corridor centered upon Letcher County, Ky., which sits leeward of the great High Knob Massif, Black Mountain, and Pine Mountain ].

Meanwhile, the past weekend and month has also featured some "squirrely" activity down in Lee County of the HKL.

And, I do mean SQUIRRELY! 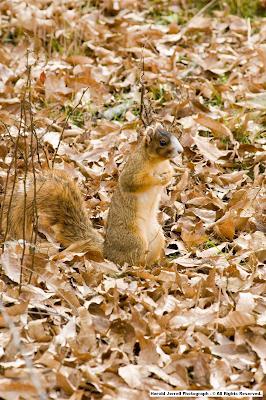 Charlie is a personal friend of Harold Jerrell, as one can surely tell by these perfect POSES!

Charlie Striking A POSE for the Camera 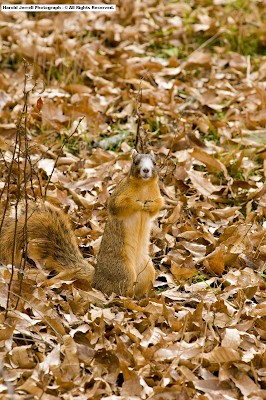 Charlie, rainbows, exotic cloud formations, frosty fogs and SO VERY MUCH MORE are all collectively what makes the High Knob Landform ( HKL ) and Cumberland Mountains so great.

[ Reference this section of my website to review highlights: http://www.highknoblandform.com/2009/09/high-knob-landform.html ].

They are the reason for this website, pure and simple!

A truly spectacular late autumn scene that exemplies this,          was recently captured by Harold amid his majestically beautiful Lee County homeland of the HKL. 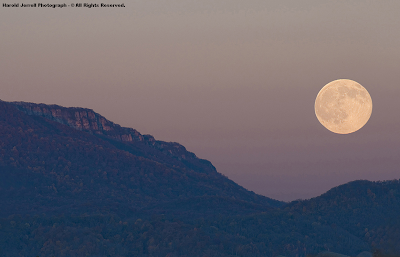 Do you believe now?

Posted by Wayne Browning at 4:04 PM