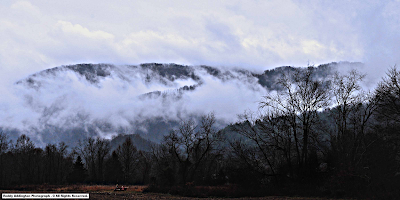 Ribbons and multiple layers of white vapor swirl through tree tops and rocky crevices of the landscape to create new scenes with every passing moment, as captured by photographer Roddy Addington during this final afternoon of November 2009. 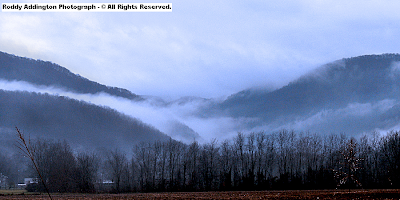 Rolling across the highcountry, clouds break and thicken to cast varying shades of light upon this magnificent setting, during an afternoon many would deem as simply nasty! November 2009 was an unusual month. It began and ended wet, with many dry hours in between.

In numerous ways, November was more like October ( minus it's gorgeous colorations ) than the end of autumn!

November 2009 ended as the driest month in more than a year. Typically, that climatological distinction is owned by October.

It generated very little snow, even on the summits, which was more like that typically observed during October, when the first light snowfalls of winter whiten the highcountry.

An array of gorgeous sunrises, sunsets, and amazing displays of frosty cold mornings mixed with nocturnal fog formations made the month spectacular amid the great High Knob Landform.

Even without the more typical array of snow and RIME events! 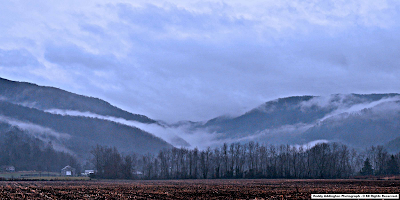 
My friend Gary Hampton, superintendent of the Big Stone Gap Water Plant sitting amid great South Fork Gorge, reports that 3.88" of rain fell at Big Cherry Dam of High Knob during November.  That was 1.27" more than measured down at the Water Plant, and 2.01" more than observed at my official NWS station near Clintwood ( outside the lifting zone of the massif ).

November 2009 was the driest month observed at Big Cherry Dam since last October.

In reality, as previously discussed, there has been around 3.00"   of evaporational loss at Big Cherry Dam during the year, between hand-measurements, so that if it had been possible to measure every day by hand the 2009 tally through November would have been approximately 73.25" .

The above not including wind induced rain gage undercatches, and other sources of moisture loss such as that which is more common with frozen precipitation forms.

For an overview of this, please reference the following section of my website:

The evaporational loss at Big Cherry Dam being based upon observed losses at my official NWS station, in Clintwood, during the past year.

Autumn precipitation in the High Knob highcountry was enough to keep the water rolling, and Big Cherry Dam overflowing its spillway throughout the entire month of November 2009.

Water draining from eastern portions of the massif, out of Bark Camp Lake, also kept whitewater moving despite somewhat less total precipitation than observed within the Big Cherry Basin ( as captured below by mushroom expert and photographer Johnny Stanley ). 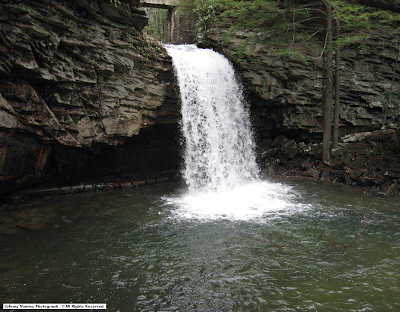 The meteorological autumn season of September-November generated 17.33" of rain at Big Cherry Dam of High Knob, and 12.31" in the City of Norton.

Autumn rains generally varied from just below average, to just above average, across the Cumberland Mountains ( falling in between the EXTREMES highlighted below ). 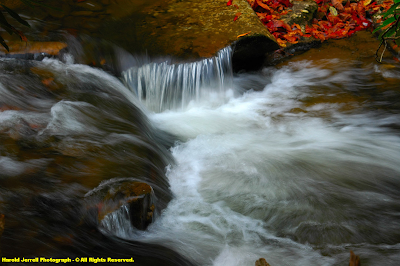 Snowfall was MUCH below average during autumn, with only a general 0.5" to 3.0" across upper elevations, above 3000 feet, during the season.  A dramatic departure from last autumn, when a general 2-3 FEET was observed within upper elevations of the High Knob Massif during October 1-December 1.

Extreme was the word to describe the regional setting during November, with HUGE variations in rainfall totals between the Ohio River Valley and Atlantic Coast.

For a change from previous 2009 patterns, this unusual November generated extreme dryness across much of eastern Kentucky and West Virginia, and extreme wetness from the New River Valley to the Virginia Tidewater.

By contrast, the following locations reported among their driest November's on record.

Perhaps the most dramatic regional swing occurred in Paducah, Ky., which had 10.55" of rain to establish its wettest October on record, followed by a mere 0.56" during the next 30-days to mark its driest November of all-time.  Back to back monthly EXTREMES!
Posted by Wayne Browning at 10:00 PM