A Snowy December Continues
Due to a computer problem the High Knob Landform website will not be displaying any photographs or graphics of these recent events at this time.

[ Please check back later for an array of wonderful images once this problem is fixed ].

A couple of major snow events have impacted the High Knob highcountry and its surrounding area so far during December 2010, with another one upcoming for the Christmas Holiday period of December 25-27.


The December 4-8 episode is well documented below, in the next section, with more specific details and photographs of December 11-15 conditions upcoming later ( stay tuned ).
Meanwhile, pre-Christmas snowfall totals are off to a fast start this season as another big winter storm potential arises for the holiday period.  Significant snow accumulations of a foot or more will be likely across the already snow laden High Knob highcountry during the December 25-27 period.


*Approximate total ( local amounts may be greater ).
A general 40-50" of snowfall had occurred this season amid the High Knob highcountry, above 3000 feet, through morning hours of December 21.
A significant amount of this snow was still present in depth upon upper north slopes and crestlines of the massif, at highest elevations, with my friend Steve Blankenbecler of Virginia-Kentucky Communications reporting 14" of snow depth at a Eagle Knob snow marker on Monday amid numerous places with 24-30" of total depth ( following major settlement since Dec 14-15 ).

[ A surge of above freezing air and dense fog in low clouds worked to cause additional settlement and melting of the snowpack ( from Dec 20 measurements ) into daylight hours of December 22, with temps going below freezing again by early afternoon with sleet to snow ( melting most significant from roof-tops on Eagle Knob ) ].

Please check back later for photographs and more specific details. 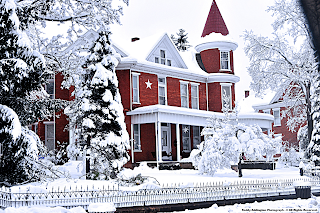 1982...Warmest Christmas on record!
The maximum temperature reached 69 degrees in Wise to establish the highest Christmas temp ever observed since record keeping began in 1955.  This reading was taken at an elevation of 2560 feet, with lower elevations being warmer ( e.g., 75 degrees in Pennington Gap ) and higher elevations cooler.

1983...Coldest Christmas on record!
The minimum temperature fell to -13 degrees below zero in Wise to establish the lowest temp ever observed since record keeping began in 1955.  Unofficial MINS as low as -25 degrees below zero were reported in the area.

1986...A rainfall total of 1.42" was measured at Norton WP during the Christmas Holiday, with 1.18" in Clintwood ( mostly fell during December 24, with foggy conditions during Christmas day ).

1987...Wettest Christmas Holiday on record!
A total of 4.55" of rain fell at Norton WP during      the December 24-27 period, with locally greater amounts across the High Knob highcountry ( a rainfall total of 2.40" in Wise established the 24-hour record for Christmas ending at 5 PM on Christmas day ).

1989...Arctic cold & snow.  Temps as cold as -20+ below zero occurred amid upper elevation basins from the High Knob Massif to Burkes Garden during the Dec 23-25 period.  A 4" snow depth was observed at Wise 1 SE on Christmas day, with deeper depths in the High Knob highcountry.

1990...NWS Cooperative Stations in Clintwood and Wise were the only official sites in Virginia to report 1" or more of snow depth during Christmas     ( this included northern slopes in the City of Norton, with deeper depths along the High Knob Massif ).

1991...Light snow flurries fell on Christmas Eve with none on the ground amid the lower elevations at Clintwood 1 W on Christmas.

1992...Heavy snow developed during afternoon on Christmas day, with up to 6"+ accumulating across mid-upper elevations of the High Knob Landform & Tennessee Valley Divide.  A total of 2.6" were observed in Clintwood.

1993...Snow developed during Christmas day with intense afternoon snow squalls.  A snow depth of 6" was measured at Clintwood 1 W by early hours of December 26.  Air temps plunged to -3 below zero on Eagle Knob of the High Knob Massif, amid snow depths of up to 12"+ .

1994...A Christmas morning snow depth of 1" atop the High Knob Massif, with no snow in the valleys.

1995...A 1" snow depth on Christmas morning increased during the day, with 4.2" of new snow falling at Clintwood 1 W.  Snow depths of 6" to 8" were reported across the High Knob Massif.

1998...A preholiday ice storm during Dec 23-24, with 1" of packed ice and sleet remaining on the ground at Clintwood 1 W on Christmas morning.  For the second consecutive year significant snow followed Christmas, with depths of 4" in Clintwood and 6" to 10"+ across the High Knob Massif by December 31.

2001...Bare ground across the entire Appalachian range on Christmas morning ( south of the Pennsylvania border ).

2004...Christmas morning snow depths of a foot or more in places across northern slopes of the High Knob Lake Basin were the most reported in the region ( up to 9" of depth were measured following 44 consecutive hours of above freezing temps into December 30 ).

2006...Christmas day got off to a chilly, wet start on gusty SSE-SE upslope flow into the High Knob Massif.  This formed standing lee wave clouds during the day.  Snowflakes subsequently flew, for the second year in a row, the day after Christmas with 2" to 3"+ of snow and riming in the High Knob highcountry.

2007...Warming temperatures and a couple of rain events washed away all the pre-Christmas snow from even the coldest, northern slopes such that bare ground was found yet again across the Appalachians ( south of PA ) for the third time this decade on Christmas ( not a surprise during this driest year on record, with its anemic 4" to 7" snowfall start to the 2007-08 winter ).

2008...Bitter cold temps prior to the holiday, with -6 below zero atop Eagle Knob of the High Knob Massif on Dec 22, gave way to rapid warming on strong winds.  Rain, not snow, arrived in time for Christmas Eve with up to 0.60" measured at Big Cherry Dam of the High Knob Massif.  For the third consecutive year, and the fourth time this decade, Christmas day dawned with no snow on the ground south of the PA border ( amazing given the general 27"-36" snow start to the 2008-09 winter in the High Knob highcountry ).

2009...Beware of what you wish for!  A Mega-DUMP snowstorm dropped 2-3+ feet of snow depth upon the High Knob Massif during December 18-19 ( with drifts of 4-5+ feet ), amid a orographically enhanced circulation.  The storm stranded residents and paralyzed the surrounding area with massive power outages that kept many in the dark right through the Christmas Holiday ( a few had no phone line service until February 2010 ).

These 30 Christmases ended with a great BANG, and BOOM, as the December 2009 winter storm was the most devastating event to strike locally during these 3 decades of diverse holiday season events!


Updated...
2010...Second white Christmas in a row!  It would have been a white Christmas regardless, given the presence of old snow, but a fresh blanket of 2" to 3" accumulated into Christmas morning to mark the beginning of a prolonged period of upslope snow.  Depths on Christmas Morn varied from 3" to 7" in Clintwood to around 15" on Eagle Knob of the High Knob Massif.
[ Snow depths by December 27 varied from 7" to 13" in Clintwood to a general 12" to 24" above 3000 feet in the High Knob Massif        ( with drifts to 3 feet or more ) ].

A few data sources for this 30-year period included,


This is only a partial listing of the many who make what I do possible.  To all those named and the many others un-named, which I've met and talked with over the years, I am so very thankful and appreciative to each and every one!

Finally, an extra special thanks to my friend Roddy Addington whose been the lead photographer of this website and become a partner in this effort to showcase the High Knob Landform ( giving local residents, the region, and world new understanding for a very special portion of planet Earth! ).

Rod now has his own fine print website that will feature many new photographs from nature to sports and beyond in the coming year.

Posted by Wayne Browning at 9:17 PM