May Drier Than Normal With Seasonal Temps 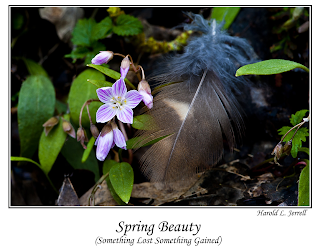 Despite numerous days with rain, and perhaps surprising to many, the month of May 2013 ended drier than average across much of the western side of the southern-central Appalachians.

Climate Statistics
For May 2013

In the High Knob Massif average temps during May generally varied from 60-65 degrees by day
at higher elevations to 40-45 degrees at night in colder valleys ( mildest night temperatures being on exposed ridges with upper 40s to lower 50s above 2700 feet ). 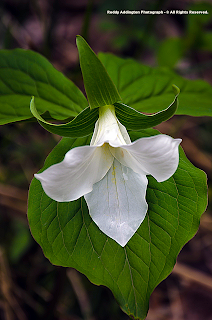 Evaporation losses between hand-measurements started during April-May with 8 total measurements during the 2 month period. 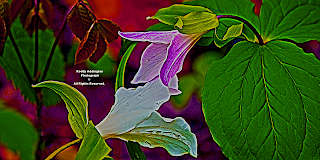 While the 40.50" of total precipitation measured by Gary Hampton & staff in the 4"-diameter NWS rain gauge at Big Cherry Dam during the 6-month period from December 2012 through May 2013 was just a little above the current 6-year average December-May total of 38.08", it must be remembered that rain gauge losses were a factor throughout this entire 6-year recording period
( especially in snows too deep for the gauge to physically contain ).

One of the reasons I started this website was to highlight this significant precipitation regime which had never before been recognized in such a way amid Virginia.  In the climatology I'm writing a central theme is the importance of initial lifting of air masses associated with orographic forcing that tends to rule the period from November-April, or in some years October-May, such that precipitation enhancement tends to be greatest in areas of initial air mass lifting ( which makes air flows with SSW-WSW components critical since they are the climatological, or
long-term, mean flow trajectories into Virginia ).

[ May 2013 was one of the exceptions to climatology which occasionally arise via prolonged E-SE air flow trajectories, with the wettest conditions developing across the southern Blue Ridge in Virginia with initial lifting along respective windward slopes, followed by a positive feedback for continued wetness ].

The setting with NW air flows in winter has long been recognized across central-northern Virginia where even highest elevations of the Blue Ridge receive much less snowfall, in the long-term mean, than low-middle elevations along the windward side of the eastern West Virginia highlands.

An analogous winter pattern in the Cumberland Mountains taught me the concept and importance of initial air mass lifting decades ago when I would frequently measure as much or more snow at 1560 feet elevation in Clntwood as was being reported at the top of Shenandoah National Park in Big Meadows of northern Virginia.

This website has recently illustrated the huge snowfall gradient existing from NW to SE across the High Knob Massif, with many FEET of difference in amounts between windward slopes and crests verses sites resting downstream ( leeward ) of the massif
in places like the Tri-Cities of the Great Valley.

May 17, 2013
One Of Numerous Color Forms
Flame Azalea ( Rhododendron calendulaceum ) 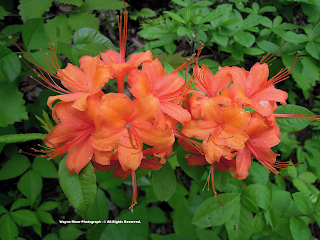 Wayne Riner Photograph Thoughts...
"These flowers now dot the woods with
a wide range of colors."

Since this significant precip regime is critical to ecology, geomorphology, karstification, and total biodiversity the understanding of this and many other important concepts would be facilitated by the recognition of the High Knob Landform, or geological Powell Valley Anticline, as a consolidated mountain landform.  It is rather absurd, and ironic, that Cliff Mountain, Little Mountain, Little Stone Mountain, Powell Mountain, Stone Mountain etc., are not collectively recognized in scientific works as being part of the High Knob Massif ( remnant high country mass of the High Knob Landform - Powell Valley Anticline ).

For example, Brumley Mountain, Russell Beartown, Tazewell Beartown, Garden Mountain, Flattop Mountain are all recognized as being part of Clinch Mountain, and often noted as such, yet both their connection to each other and geology ( alternating anticline-syncline segments ) are not as consolidated as are mountains of the High Knob Massif ( which are together as a single anticline & overthrust block - the Cumberland Overthrust Block ).

Air flows and weather systems recognize no political boundaries or mountain names, but will react to the orographic forcing that is ( and comes only from ) the consolidated mass surrounding High Knob regardless of whether it is ever recognized by humans as being so. 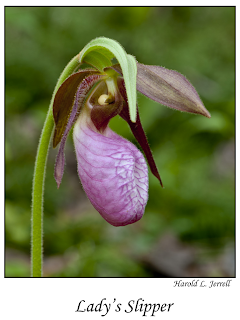 Although snowfall was not measured at Big Cherry Dam during this 6 year period, it was observed in the area between basin heads of Big Cherry Lake, High Knob Lake, and the Norton Reservoirs.

Rain gauge losses due to wind and secondary moisture sources such as fog drop from trees and rime deposition on trees are not included in any rain gauge totals or estimates ( i.e., the total moisture budget for the High Knob Massif is more significant
than shown by rainfall and snowfall amounts ).

As my climatology shows, the featured Big Cherry Lake Basin would not be the wettest area ever documented in Virginia
( outside the High Knob Massif ) if there was only Powell Mountain or only Stone Mountain.  It is the large, consolidated mass of many mountains together which are the High Knob Massif that generate enhanced lifting of air from multiple directions to form its significant precipitation regime ( including rime & fog ).

Although possessing obvious gaps between the mathematics, modeling, and real world atmosphere
+ surface terrain the above paper highlights various concepts associated with mountain height & width applicable to cold season air flow that can be applied to the High Knob Massif ( with its great width ) and other mountain settings during the orographic forcing season. 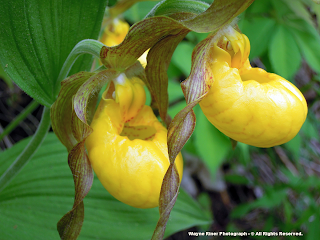 Wayne Riner Photograph Thoughts...
"The warm days and rain have brought wildflowers to the woods.  The lady slipper is one of this area's native orchids."

In the High Knob Massif spring temperatures averaged from 50-55 degrees by day in upper elevations to 30-35 degrees at night in colder valleys ( mid-upper 30s on exposed ridges ). 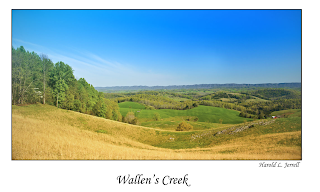 Spring precipitation was typically abundant with a general 18.00" to 21.00" across upper elevations from the Robinson Knob and High Chaparral communities southwest across the main crest zone. 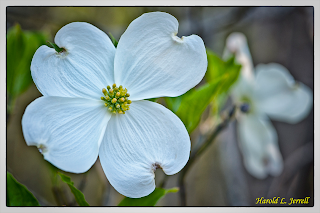 Spring snowfall was mostly concentrated during the month of March, with the extensive rime forest formation being especially interesting and majestic. 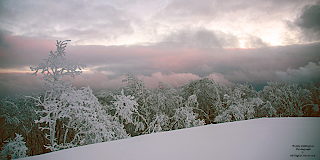 Spring 2013 was cooler than average thanks
largely to a cold, wintry March. 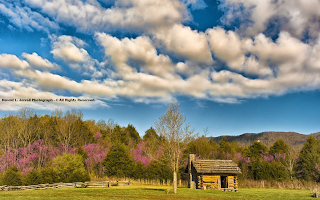 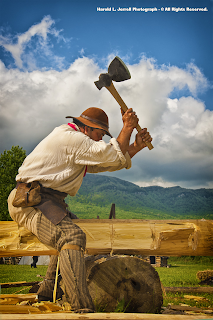 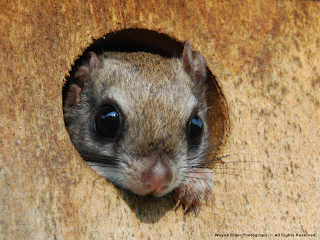 Wayne Riner Photograph Thoughts...
"The birdhouse was built for bluebirds; however, this one was taken over to provide a home for a family of flying squirrels.  This baby is named "Rocky" and is looking for his hand fed treat of walnut bits." 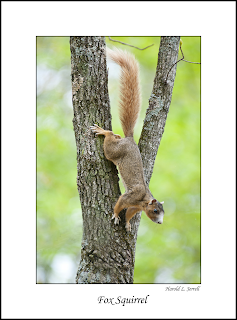 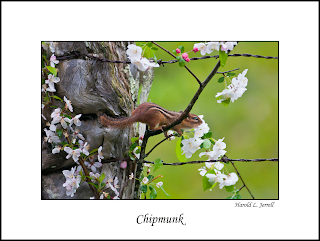 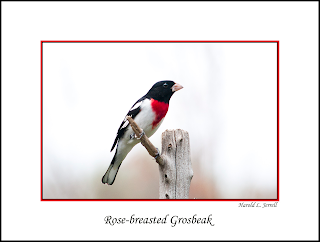 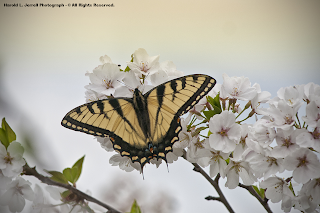 May 23, 2013
Gorgeous Rainbow Above The Cumberlands 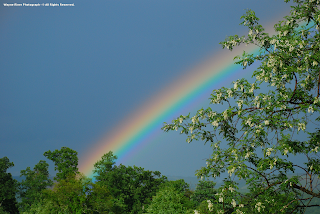 Wayne Riner Photograph Thoughts...
"The evening storm passed  to leave us with a rainbow displayed with the white locust blooms."

A dry spell following these gorgeous late
May rainbows gave way to drenching rain and thunderstorms during the first weekend of June, with widespread 2.00" to 4.00" rainfall totals being recorded across the High Knob Landform, from High Knob to Cumberland Gap, and along the adjoining Clinch River Valley. 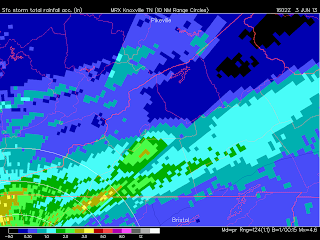 While Doppler radar actually under-estimated rain amounts it illustrates the corridor that received the heaviest rains which tapered dramatically to the north of the High Knob Landform
and Clinch River Basin.

Booming thunderstorms associated with the next system produced local downpours during the late afternoon and evening hours of June 5 to mark the start of another wet period. 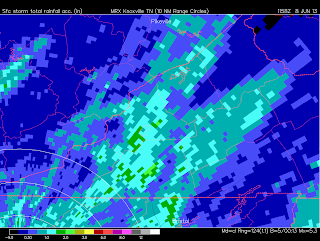 Rainfall totals from late June 5 into predawn
of June 8 reached 1.50" to 2.00" in Clintwood, Clinchco, Norton, Wise, Duffield, Dungannon and Fort Blackmore to note a few places.

As so typical of convective rains, some places received much less.

Looking Toward Pine Mountain
Turbulent Skies Above The Cumberlands 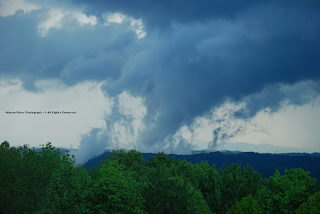 Rainfall totals for the June 1-8 ( AM ) period varied from 2.46" in Clintwood to around 6.00" in the Fort Blackmore area of Scott County ( Doppler under estimated totals some based on gauges ).

Rainfall Estimate Ending At 8:00 AM
Estimated Rainfall Totals For June 1-8, 2013 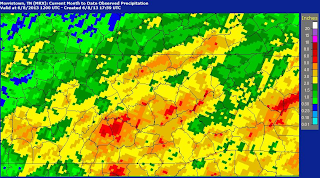 Rainfall during June 1-8 was much less
to the northwest of the mountains.

Rainfall Estimate Ending At 8:00 AM
Estimated Rainfall Totals For June 1-8, 2013 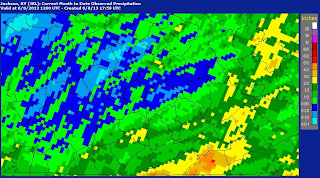 The current pattern, to say the least, is troubling given another surge of tropical moisture ahead of the next cold front during June 9-10, with a break followed by a heat surge which likely gets cut off
by MCS formation that makes a move on the Mountain Empire by the middle of next week
( adding a severe component to heavy rain potential ).

The bottom line...continued heavy rain potential on top of an already WET June.

Posted by Wayne Browning at 6:32 PM