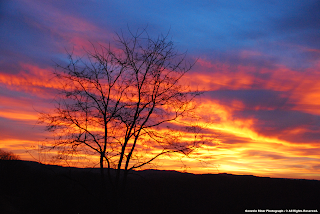 A spectacular sunrise above the Cumberlands
was captured by photographer Genevie Riner amid early hours of December 20, in advance of one of the numerous storm systems observed during this wet and stormy month.

December 2013 ended having produced milder than average temperatures, much above average precipitation and MUCH, MUCH below average snowfall across the High Knob Landform and southern Appalachians. 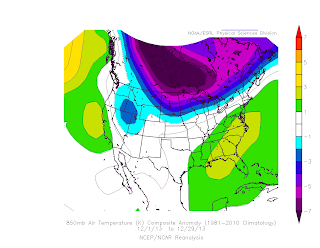 November 2013 had more snowfall than December to oppose the natural trend of climatology that typically features much more December snow.

The big picture was dominated by a powerhouse polar vortex whose tight circulation forced repeated intervals of SW upper air flow across mid-latitudes, especially the Eastern-Southeastern USA and southern Appalachians. 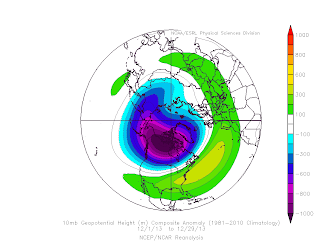 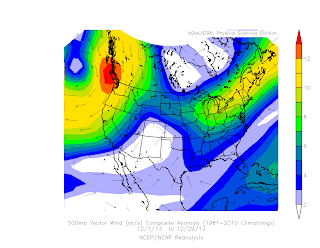 Despite the lack of December snow, compared
to climatology, enough fell to produce a white Christmas Eve Day & Christmas Morning period across higher elevations of Wise & Dickenson counties ( as well as the Burkes Garden area of Tazewell County & Mount Rogers-Whitetop of Washington-Grayson counties ). 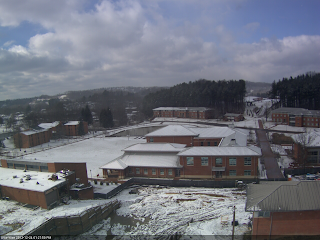 The heaviest snow in Virginia likely fell amid a rather well developed snowstreak from heads of Guest & Powell rivers southeast into the Wise Plateau, including the Hurricane-Dotson Creek communities. 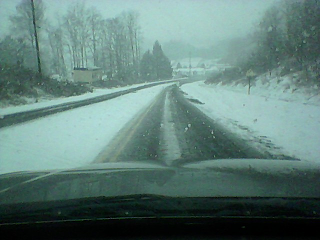 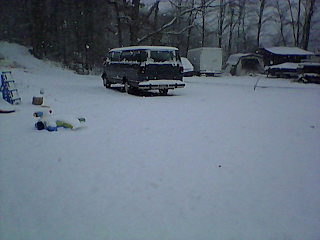 Winter wonderland conditions were on display amid highest elevations in the High Knob Massif which missed the main snowstreak but still managed to accumulate upslope snow & rime. 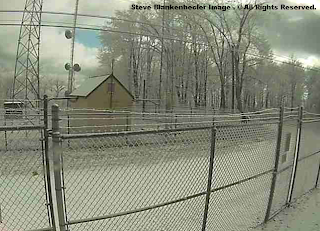 It was a cold Christmas Holiday with temperatures dropping from 26 to 8 degrees in the City of Norton between the beginning of Christmas Eve day and Christmas Morning. 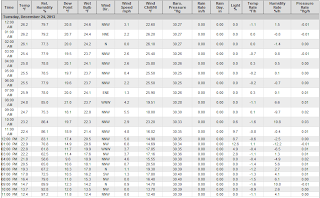 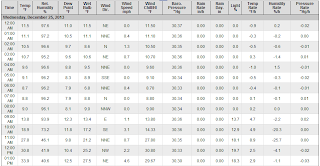 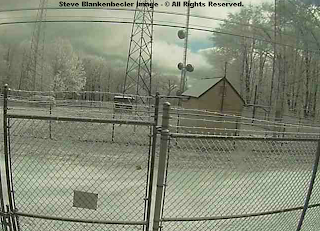 Among the last spectacular sunrises of 2013 was captured by photographer Wayne Riner during morning hours of December 28, as wave clouds formed in advance of the next big storm system. 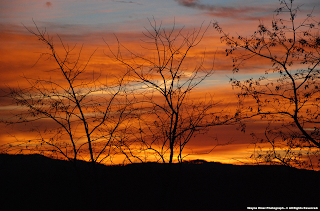 Yet another heavy rain, wind, fog event followed into December 28-29 before a transition back to winter with light snow & icy fog again coating the High Knob Massif to close out 2013. 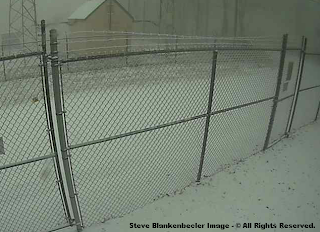 A couple of bitter surges of arctic air are
coming during this first week of January 2014.

The bitter blasts are centered around:

January 2-4
This has potential to produce 0 to 10 degree
readings, with sub-zero values possible after
snow accumulation if winds calm & skies clear
( Wind Chills will go well below zero )

While the Polar Vortex is not itself moving south into the USA, at least not yet, blobs of bitter air from within its barbaric mass of coldness are literally being squeezed out of it like happens
when you squeeze a tube of toothpaste.

An Analogy
When you squeeze both sides of a tube of toothpaste some paste squirts out the end from the pressure of your fingers pushing on each side, which contract inward and in the process force paste to move out the end of the tube.  If the toothpaste tube had an opening on the other end, some would also go out in the opposite direction.

The Polar Vortex has been under a significant Wave 2 attack, triggered by a positive Mountain Torque event across Eastern Asia, over the Himalayas, with push being exerted against the vortex from both the Atlantic side and Pacific side. 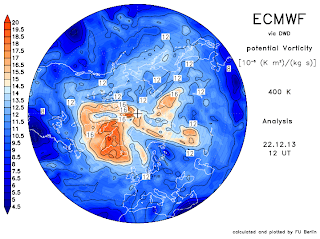 Note how the vortex shape amid the lower stratosphere has changed over time from December 22 ( above ) to December 31
( below ), and how the potential vorticity field became elongated and "squeezed" toward both ends.  Waves from both sides, thus a Wave 2, have been causing compression ( squeeze ) to occur. 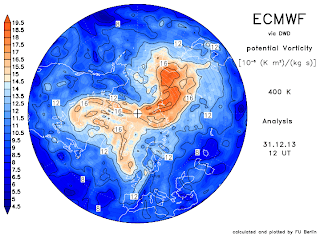 On the Atlantic Ocean side the push on the Polar Vortex is weak at the bottom but strong at the top, in contrast, on the Pacific side the push against the vortex is strong at the bottom and weaker at the top such that the vortex is being vertically tilted and squeezed in the middle thru a depth of atmosphere ( the vertical tilt along a horizontal line not visible on these "flat" graphics ).

This process is also clearly
visible at the 100 MB level 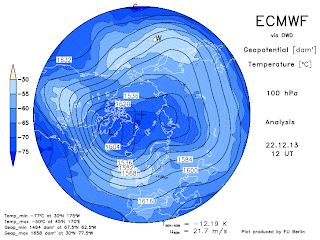 Observe the changes between
December 22 & December 31 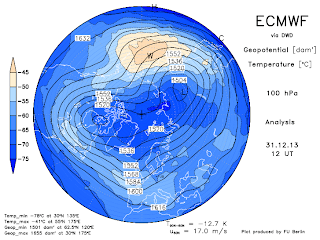 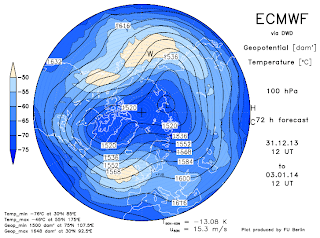 Note that the vortex, which has been very strong, will likely reform and stimulate another surge of enhanced SW Upper Air Flow in middle latitudes to keep a wild UP and Down temperature regime going. 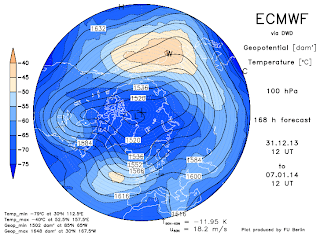 While the first week of January 2014 will
feature a couple of arctic surges, the second being EXTREME, the potential of a mid-late January major warming event in the stratosphere is increasing such that more prolonged, extreme conditions could follow renewed intervals of
SW Upper Air flow.  Trends to monitor. 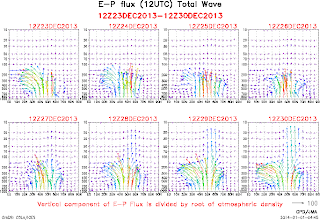 Both direction ( toward the North Pole = more favorable for vortex weakening and toward the Equator = less favorable for vortex weakening unless reflected by critical layers ) and magnitude ( longer = stronger and shorter = weaker ) are important with respect to EP-Flux Vectors, which indicate enhanced, deep vertical forcing through the troposphere and stratosphere in recent days. 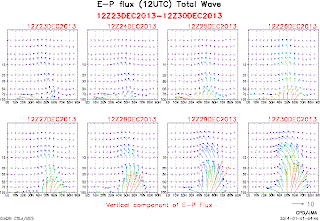 While the above is a composite of all waves,
Wave 2 is currently most potent. 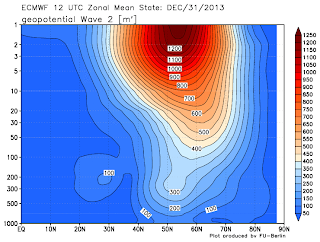 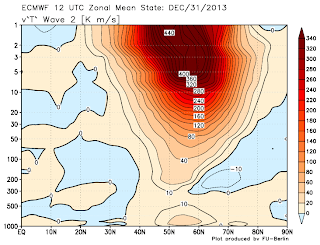 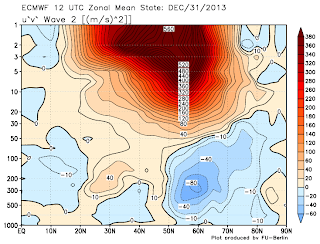 The strength of current wave forcing along with forecasts of significant activity to continue during the next 1-2 weeks now has some extended range models, like the CFSv2 and GFS, forecasting a major SSW event of the split vortex type by mid-late January.

While tropsopheric results of past SSW events have varied, much like each SSW possessed a unique evolution, the implication of splitting the large mass of barbaric coldness developed this year over Canada could certainly produce extreme conditions over a much more prolonged period for some region or regions.

Split Vortex SSW events tend to have more pronounced impacts upon the north-central Pacific sector which could be important this year if +PNA was promoted for troughing into eastern USA.

This section is under construction.  Check back for updates.
Posted by Wayne Browning at 8:26 PM