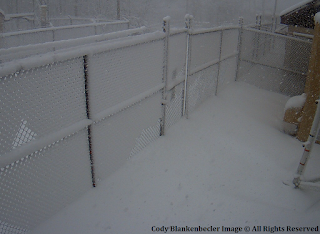 A foot or more of snow has fallen into Christmas Day along the windward slopes and crests of the High Knob Massif, from the base at the City of Norton Water Plant to the summit level (and snow was still falling). 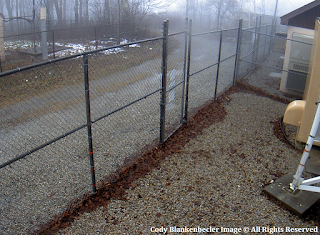 I was on Eagle Knob for the annual Christmas Bird Count and measured how much snow it would take
to cover the bottom, solid frame of the door to this
Virginia-Kentucky Communications facility.
It would take more than 5", which was achieved by
the end of the main frontal snow band.  More total snow, however, appears to have fallen during this event since Midnight Christmas than fell during the frontal band.
Careful measurement, otherwise, indicates that 10" to 18" of snow depth is observed by flipping back-and-forth between the Christmas Eve comparison image and the observation images taken at 1:04 pm, 3:11 pm, and 4:16 pm (below) Christmas day (a period that featured snowfall rates of more than 1" per hour).
Much deeper snow drifts (several feet or more) will make travel hazardous to impossible along Route 237, Route 238, and State Route 619 until VDOT can plow the roads and this snow also settles (Route 237, and many others, are not typically worked by VDOT).
Joe Carter, veteran technician at the City of Norton Water Plant located at the base of High Knob, measured an average of 8" of snow on the ground at 9:00 AM Christmas morning (8.3" of total snowfall).
An additional 3.8" had fallen at the Norton Water Plant up to 2:30 PM Christmas, pushing the event snowfall total to 12.1" at approximately 2365 feet elevation.
Some specific details of this event.
City of Norton Water Plant
(8"-Diameter NWS Rain Gauge)
9:00 AM Christmas Eve Day
0.50" of rainfall (24-Hour Total)
5:00 PM Christmas Eve Day
0.69" of additional rainfall
Joe changed the rain gauge when a transition from rain to sleet occurred, helping to better document the total frozen precipitation.
9:00 AM Christmas Morning
1.52" (24-Hour Total)
2.02" (48-Hour Total)
Specific Breakdown:
1.19" rain / 0.83" sleet-snow
A general 7" to 8" (7.5" average = 8") of snow was measured on the ground at 9:00 AM at Norton WP
(1858 vertical feet lower than the High Knob peak).
A general 10" to 12" were on the ground at the
2:30 PM observation at Norton WP, following nearly 4" of new snow since 9 AM.
9:00 AM on 26 December 2020
0.13" of snow water content
Mean Snow Depth: 9"
2.15" (Storm Total)
Specific Breakdown on Snowfall:
12.1" total (0.96" water content)
Max Snow Depth: 10-12" (11")
*An approximate 13:1 snow density, or 0.08" of water per 1" of snow, for the event is somewhat deceptive given that snow density began wet
(8:1 to 10:1) and ended very dry (30:1).
*If using only the official NWS rain gauge catch (actual values would be somewhat different using snow cores as I did below at Clintwood 1 W).
High Knob High Country
23 December 2020
Along Route 238 on High Knob Peak
Lingering Snow Before The Christmas Storm 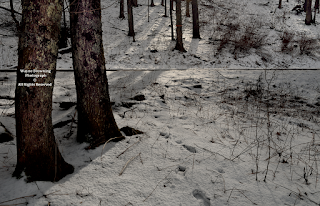 Wayne Browning Photograph © All Rights Reserved
Most of the old snow lingering from recent events melted, even on these upper north slopes, in rain prior to this heavy fall of Christmas snow.
23 December 2020
High Knob Peak of High Knob Massif
Lingering Packed Snow (Ice) on Route 238 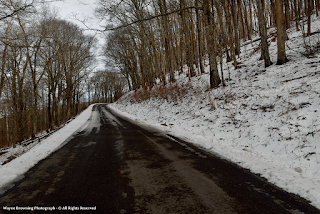 Wayne Browning Photograph © All Rights Reserved
At this low sun angle time of year, and elevation, it typically requires a long time to melt away snow and ice (including on roads once it becomes packed), with Route 238 having been plowed and salted by VDOT in wake of the 17-18 December event.
Forest Service Route 237, along Big Cherry Basin, also had sections of packed snow-ice lingering on 23 December 2020.
23 December 2020
Looking Across High Knob Lake Basin 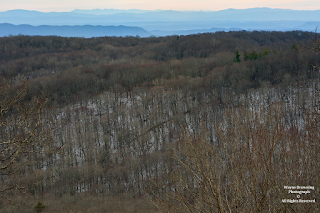 Wayne Browning Photograph © All Rights Reserved
It will now be interesting to see how long snow can
linger in wake of this big Christmas Storm, given a
stormy pattern upcoming by the New Year Holiday.
Above slopes, where I measure snow, had white Christmases during the following recent years:
2009
2010
2012
2013
2014
2017
2018
This Christmas Storm of 2020 now marks the deepest snow since 2010, when 2 feet of new
snow fell through the Holiday period.
Christmas Holiday Storm of 2010
Deep snow covered the high country in 2018, but
it had melted and settled enough by Christmas to now be less than current snow depths in 2020.
Now, more about this current storm.
8:00 AM on Christmas Morning
High Chaparral of High Knob Massif 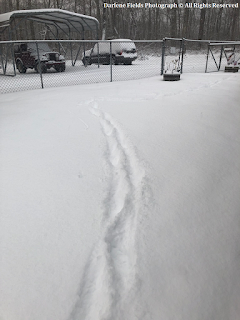 Joe & Darlene Fields measured 9" of snow on the ground in the High Chaparral community at 8:00 AM Christmas morning (3300 feet elevation), during a
brief lull in the action.
5:00 PM Christmas Day
Snow Depth In High Chaparral 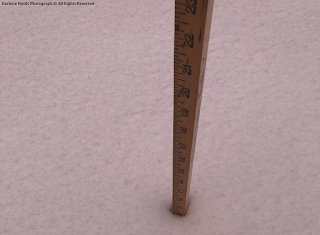 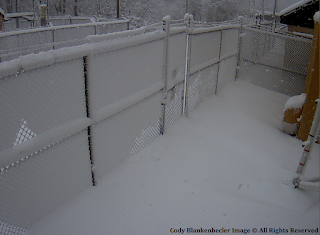 Cody Blankenbecler Image © All Rights Reserved
Snow fell heavily, amid squalls, at the summit level through the afternoon where the final total will have
to wait until all snow ends (of course) and more data is collected.  Up until 5 PM, the preliminary storm total was in the 15-16" range.
A foot or more of snow (12.8") has also been reported near the crest of Black Mountain, along the Wise-Harlan border, as of 6:30 pm on Christmas evening.
Lower Terrain Toward The North
(Clintwood 1 W NWS)
Statistics for my official NWS station in Clintwood finds that 0.72" of rain had accumulated (versus 1.19"
at Norton WP) when the transition to sleet occurred on Christmas Eve afternoon.
A total of 5.3" of snow accumulated with the main frontal snowband up through 11 PM Christmas Eve.  Ground snow depths varied from 5" to 6" .
An additional 3.1" of snow accumulated through Christmas day in off-on snow showers and squalls, with 6" of mean depth measured by sunset (the snow having settled due to low density and unfrozen ground beneath) and a storm total of 8.4" at 1566 feet elevation.
A settled depth of 7" remained on above ground objects and snowboards that had not been swept (6" to 7" on the ground = 6.5" which rounds to the nearest even whole inch or 6").
The rain gauge catch of 0.53" on the sleet-snow water content yielded a 16:1 snow to water ratio (0.06" of water per 1" of snow).
Although light snow continues to fall (at 8:45 pm Christmas), I took a snow core and obtained 0.60" of water content to reveal a 12% rain gauge undercatch
(in reality, because I sampled snow and little sleet in
the core, the undercatch is a little more than 12%)
at my highly sheltered, mountain hollow station.
The above also means that the snow density was closer to 14:1 during this event, beginning wet and ending dry.
[The final snowfall total reached 8.5" at Clintwood 1 W].
Extreme rain gauge undercatch occurs in snow at upper elevations in the High Knob Massif, and amid other high mountain sites, such that without highly shielded gauges the only option for more accurate representation of fall water content is taking cores of snow.
25 December 2020
Long Ridge of Sandy Ridge 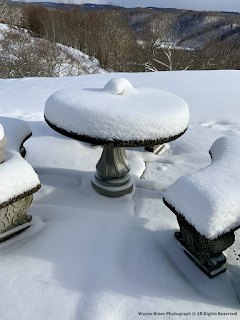 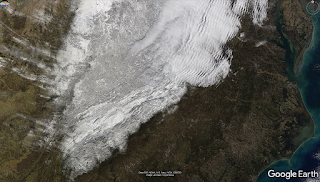 Although clouds lingered to the northeast, majestic views of snow covering the southern Appalachians
are highlighted by these Copernicus Landsat images.
26 December 2020 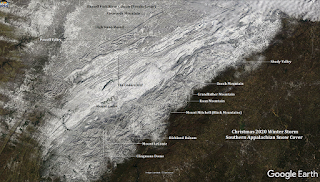 The structure of the great Cumberland
Overthrust Block can be clearly seen!
26 December 2020
Without Any Labels
Southern Appalachian Fold-Thrust Belt 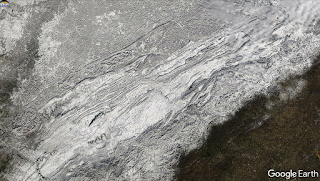 The 3125 square mile Cumberland Overthrust Block
is the most visible geologic structure of its size in the southern Appalachian fold-thrust belt, with its broad, rootless anticline (Powell Valley Anticline of the
High Knob Landform) and syncline forming the
northwestern-most thrust sheet in the belt.
26 December 2020
Cumberland Overthrust Block
Southern Appalachian Fold-Thrust Belt 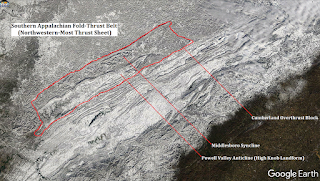 The geologic structure is polar opposite between the High Knob Massif (an anticline) and Black Mountain
(a syncline).  It is also interesting that the existence of Black Mountain is very likely a product of crustal wave compensation generated by loading associated with the creation of the great Powell Valley Anticline.
In other words, it is no coincidence that the Middlesboro Syncline became vertically thickened northwest of what is today the High Knob Massif and adjoining terrain to the southwest where a partially overlapping duplex-imbricate system exists in the anticlinal structure.
Chilled Boundary Layer
4:16 PM on Christmas Day
Eagle Knob of High Knob Massif 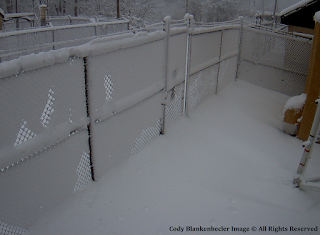 Cody Blankenbecler Image © All Rights Reserved
Snow chills a layer of air near the Earth's surface.  This is largely due to incoming shortwave radiation by day that is used to sublimate or melt snow covered surfaces instead of heating them up.
Melting, evaporation, and sublimation are cooling processes for the atmosphere since they require energy
input to drive them.  This varies from 80 calories per gram for melting up to about 680 calories per gram
for sublimation.
Case in point, despite full sunshine on 26 December the 3:30 pm temperature was only 22 degrees at the City of Norton Water Plant and 26 degrees on the "sunny" side of the city.
Even in lower elevations, at 1566 feet, the afternoon max temp only reached 28.7 degrees at Clintwood 1 W.
The chilling capacity of snow is better known by night, when it enhances OLR (outgoing longwave radiation) and radiative flux divergence.  This is especially true with clear skies and light winds.  Enhancement occurs
as decoupling develops in valleys and mountain basins.
This snow had potential for extreme temp minima, with air temps dropping to around 0 degrees or locally below in the High Knob Massif and on other high peaks, but the pressure gradient has been too tight for ideal conditions related to decoupling in valleys.
That is, prior to this evening (26 December) when
there will be at least a window of time which may
allow decoupling to occur in the favored valleys
and upper elevation basins.
24-28 December 2020
Lower Elevations of Russell Fork Basin 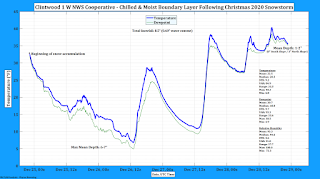 This period has felt so cold since relative humidity
from a flux of sublimating and melting snow cover
has kept the boundary layer moist (93% RH).
Big Changes In January
29 December 2020 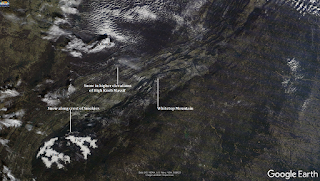 Lovers of snow should not be depressed, despite
a mild start to the New Year, as major changes are
likely to occur during January in association with
Major Sudden Stratospheric Warming.
Select 1080p HD for best viewing in Full Screen
Although produced from a UK (United Kingdom in western Europe) perspective, this video is excellent in its description of the Polar Vortex, its formation and break-down, and occasional major events known as Sudden Stratospheric Warmings (SSWs).
3 January 2021 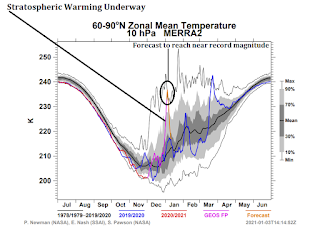 Temperatures are warming dramatically above high latitudes in the stratosphere, and should reach near record magnitude as a major SSW occurs with
a west to east wind reversal.
3 January 2021 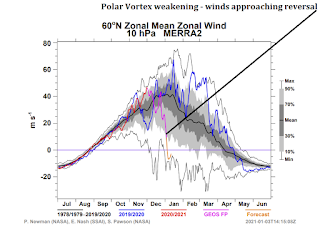 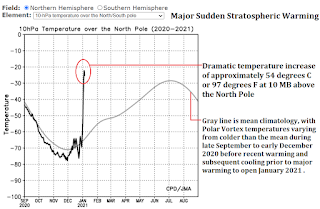 Courtesy of Japan Meteorological Agency
As of 5 January 2021, an official major warming of the stratosphere has been declared with a simply incredible temperature increase and reversal of winds at 60 degrees North and 10 MB. 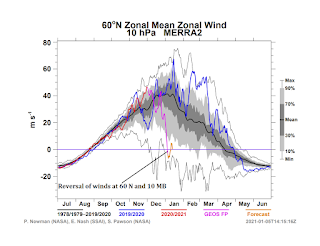 This occurred under influence
of record strong Wave 1 forcing. 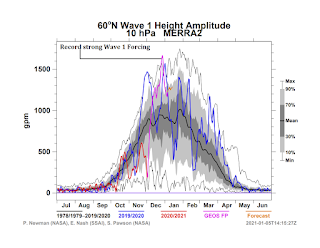 Cody Blankenbecler Image © All Rights Reserved
A light fall of snow, with 1-2" on the ground and approximately 1.5" of total snowfall, was observed
at the summit level of the High Knob Massif during
3 January into early hours of 4 January 2021.
4196 feet
12:48 PM on 6 January 2021
Eagle Knob of High Knob Massif 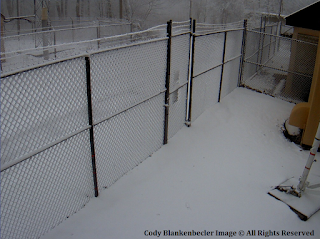 Cody Blankenbecler Image © All Rights Reserved
A general 2-5" of new snow fell at highest elevations
within the High Knob Massif into 5 January 2021 to mark another elevation-biased event.
Riming continued in clouds throughout the daylight hours of 6 January, with air temperatures in the 20s at the summit level of the High Knob Massif.
Low Cloud Deck on 6 January 2021 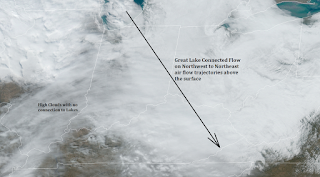 GOES-16 Visible Image
Although there was not enough vertical temperature
difference (lapse rate) over the Lakes to really activate their "snow machine," enough moisture was advected into the mountains to enhance precip amounts (and snow at highest elevations), with a general 0.50" to 0.60" at upper elevations
in the High Knob Massif (versus 0.07" at TRI), and to help maintain a cloudy boundary layer capped by an inversion.
Persistent low clouds were a product of a Great Lake connected flow, which prevented clearing to the west (outside the moisture plume) from advecting into the southern Appalachians.
Posted by Wayne Browning at 4:06 PM