The first snow & rime of the 2011-12 winter season opened the month of October at highest elevations in the High Knob Massif, adding nice contrast to emerging autumn colors. 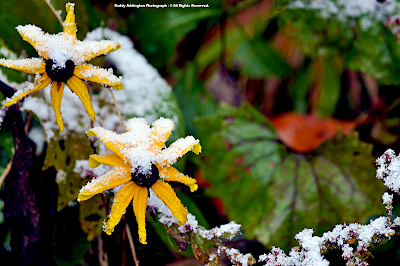 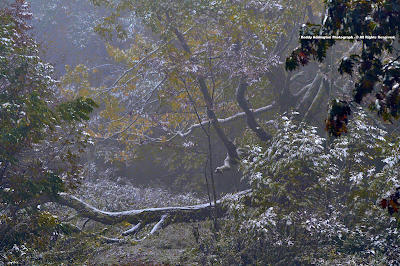 Air temperatures in the 20s at the summit level of the High Knob Massif struggled to climb above freezing during the day on upsloping and blustery NW winds.  BRRR! 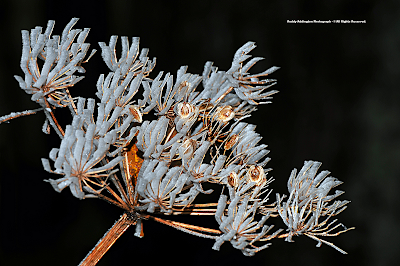 Set against blackness and illuminated by light a typically drab weed umbel takes on a golden glow in front of Roddy's lens with its load of intricate RIME....

An absolute WOW shot by Rod! 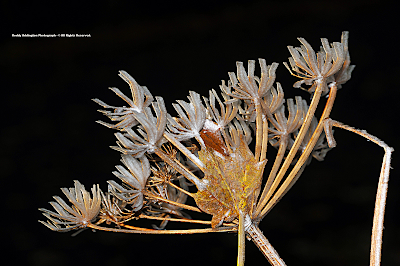 Reversing the angle of this view reveals a fallen Sugar Maple leaf plastered against the umbel of this former summer wildflower.

[ While I was not there in person to view the above plants, given their size in comparison to the Sugar Maple leaf, they are likely specimens of Cow Parsnip ( Heracleum maximum ), a northern species that grows in upper elevations of the High Knob Massif ]. 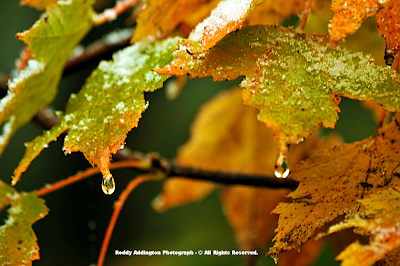 Although large snowflakes fell hard at times in High Chaparral, my friend Darlene Fields reported that they did not stick at their 3300 foot elevation.

[ Sticking occurred above 3300 feet in the northern woods of the massif, with reports and gages suggesting that more than 1" fell at highest elevations; although, there was not that much sticking at any given time in most locations ]. 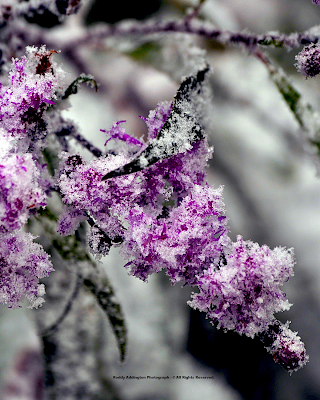 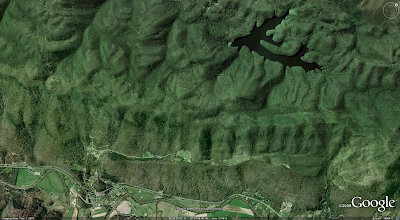 My Mother that just passed believed that the land is what sustains us as a people and nation, with a critical balance being necessary in order to benefit all the people.

Before my High Knob Landform research began in the late 1980s I had not thought much about this balance.  Now I can understand and see it clearly, partly due to the influences of my Mother and my own research, and partly due to responses from many of you ( including, yes, loggers ) that have expessed  your own opinions.

This is the USA and its my hope and prayer that everyone will always be allowed to freely express their own thoughts and opinions on all issues.

With that said, it is critical for everyone to understand that there will always be plenty of opportunities for logging and mining in the counties lying along the Virginia-Kentucky border since the majority of this land is in private and commerical ownership.

Publics lands, YOUR land, in this area offer us all a chance to have at least some degree of critical balance where this smaller proportion of the total landscape can be managed solely for recreation, tourism, and vital water supplies.

While you are always free on this website to make up your own mind, it should be noted anyone can prove Federal Timber Cuts on Public Lands produce a NET Loss and are an economic drain on both local & regional communities.

While some management of YOUR public lands is good, it should be made crystal clear that the greatest forest on the entire continental expanse of North America ( of which this was at one time ) developed WITHOUT the aid of any MAN!

[ NOTE that the above should read "Forest Ecosystem" since it was complex and interconnected in many ways that we still do not fully understand.  And that truly is KEY.  A forest is more, MUCH more, than just trees! ].

It should also be made crystal clear that local employees for our US Forest Service are some of the finest folks you'll ever meet, and that they are often subjected to orders from "higher up" their chain of command!

Please speak out and express your opinion on this issue to the United States Forest Service and your local & national governments.

On a very personal note, since dealing with the constant sickness and suffering endured by my Mother I now know, no longer just believe, that in order for us to survive as individuals and a society we must have places left free from major impacts of mankind in order to endure what can otherwise be a harsh, cruel world.

The peaceful power of a natural place is vital to the SOUL within us all and contains forces hard to explain which have been inspiration for essentially every religion devised since the initial creation of mankind and development of Life on Earth!

[ The VAST majority of loggers in this area have expressed that they WOULD PREFER that the High Knob Massif area, of which Keokee Lake may be included, not be managed for timber.  They too, believe it or not, are hard working people which like to hunt, fish, and have remote places free from significant impacts of mankind ( * ) ].

*I belong to NO environmental group and this website and research displayed is NOT funded by any groups.  This website is for ALL people and strives to present WHAT IS in a way that anyone can prove and see, the ultimate goal being that a positive difference can be made by showing this landscape ( The High Knob Landform ) in a way never before seen or understood. 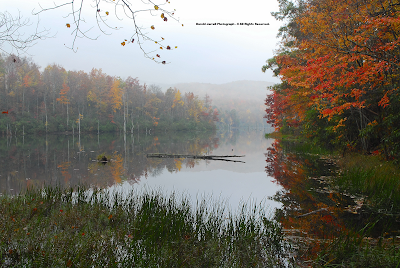 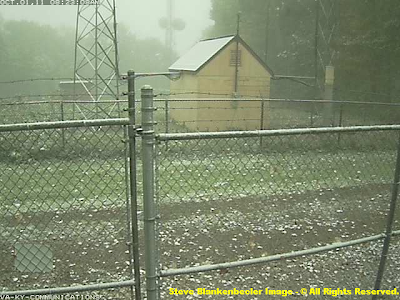 [ The first snowflakes of the upcoming 2011-12 cold season began falling at highest elevations in the High Knob Massif as final hours of September waned.

While that is atypically early, such local cold blasts can not be used as a guide to what the upcoming winter will be like here.

High latitude snow cover, especially in the critical Siberian sector, can be used during October as a guide to what the upcoming winter may be like across the eastern USA ].

In the High Knob highcountry September temp means varied from low-mid 60s at highest elevations by day to around 50 degrees in cooler basins by night ( low-mid 50s on exposed ridges ).

September rain amounts were abundant with 7.00" to 9.00"+ totals common from Big Cherry Dam to Bark Camp Lake Basin and the City of Norton.

Thanks to the major early September rain event previously highlighted, local totals for the month approached or exceeded 10.00" in portions of the High Knob Landform.

My friend & photographer Harold Jerrell, for example, measured 9.66" of September rainfall in the Silver Leaf community of Lee County some 14 miles southwest of Jonesville.

Portions of the northern slopes of the High Knob Massif also had totals in the 9.00"-10.00" range, with my friend Andrew Greear reporting 9.21" at the Norton Water Plant.

These rain totals were much greater than amounts measured across adjacent portions of the Great Valley in northeastern Tennessee, with an official September tally of 3.14" in the Tri-Cities. 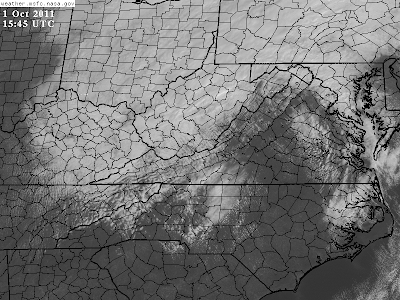 An array of orographically forced mountain waves, or gravity waves, developed along & leeward of the High Knob Landform and southern-central Appalachians amid the cold winds of October 1. 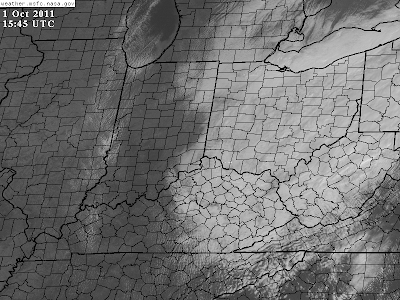 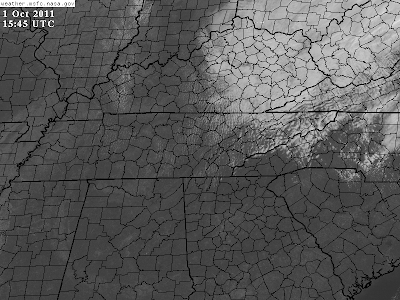 During the afternoon waves extended across the southern Appalachians on gusty NW-N winds, with pronounced waves visible lee of the NW flank of the High Knob Landform. 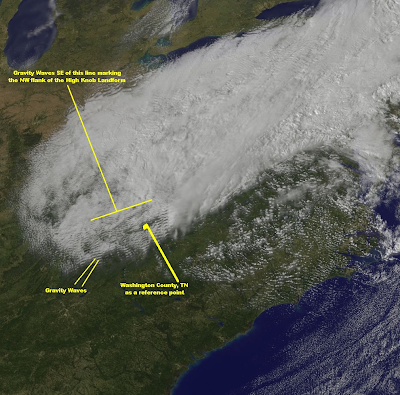 [ Observe how moisture extraction by windward facing slopes in combination with sinking, or subsidence, of air between wave crests generates sunshine in portions of the Great Valley of Tennessee and leeward of the Appalachians in North Carolina ].

Counterclockwise circulation around a spinning vortex cut-off from main jet stream winds was responsible for the above clouds, which just barely reached the southern Appalachians to limit total precipitation amounts.

[ September 30-October 2 precipitation totals reached 0.26" in the City of Norton, at the northern base of High Knob ( the bulk of what fell on the summit being snow ).  My friends Otis & Nancy Ward measured 0.40" in the Robinson Knob community of High Knob.  A total of 0.27" fell at Nora 4 SSE on Long Ridge of Sandy Ridge ( mostly liquid with some wet snow at 2650 feet ) ].