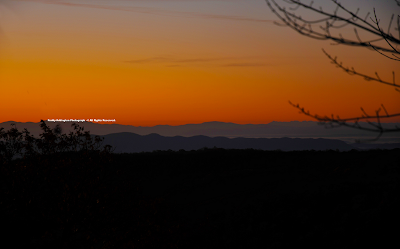 On a clear, crisp October morning there is nothing quite like the breaking of dawn in the High Knob Massif of the famed southern Appalachians, where glowing light from a sun rising well beyond the visible horizon was captured in all its glorious grandeur by photographer Roddy Addington as it illuminated the scenic mountain landscape of this wildly diverse Upper Tennessee River Basin. 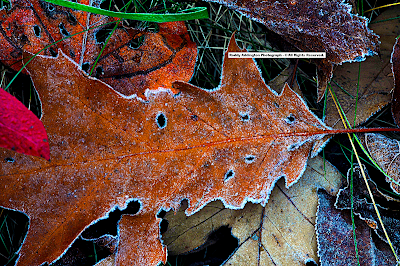 Morning temperatures in lower to middle 20s amid colder mountain basins of the highcountry generated a hard freeze that continued the major leaf fall initiated by the October 19-20 storm. 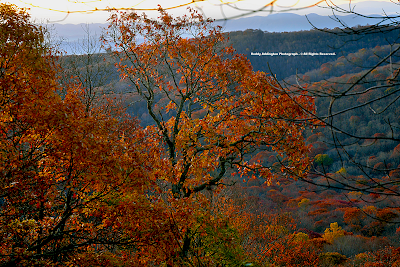 This left a few trees clinging to leaves in more sheltered places as the forest itself is quickly being transformed into one that is settling in for a long winter slumber!

[ Mountain slopes visible in the distance are notorious for holding snow cover for long periods of time, with well over 100 days having 1" or more of snow depth during moderate-severe seasons ( 80+ days with 12" or more of depth were observed in the 2009-10 winter ) ]. 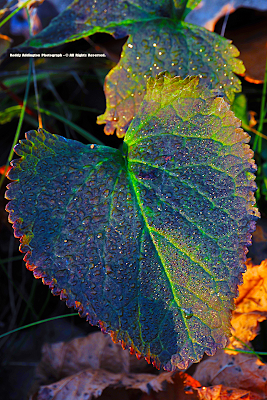 WOW...what else can be said!

[ Please NOTE:  While more information will be presented on the High Knob Landform about its vast underground world, its final frontier, it is the policy of this website that no cave locations will ever be given.  Do not ask.  Thank you very much ].

Going Subterranean
In The High Knob Landform
( Colors Beneath The Surface )

Today it is finally becoming understood that the High Knob Landform is a great karst landscape with a vast and yet unknown network of complex subterranean passages that carry and store water vital to all life upon and beneath its surfaces.

Most caves in the High Knob Landform are solution caves which over time have developed in calcareous rock types, while others have formed amid more resistant stratigraphy.

Karst hydrogeology is one aspect that makes this vast world beneath our feet, as highlighted so well above, especially amazing in the High Knob Landform since it is proving to be the wettest area in Virginia ( wetness driving its extensive karstification ). 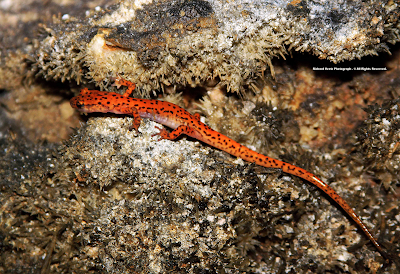 This cave is GATED and owned by the
Appalachian Cave Conservancy

[ Gilley Cave is one of the most significant caves in Virginia.  If you would like to donate to the Gilley Cave Fund or visit this cave, please contact the Appalachian Cave Conservancy ].

More than 1,000 caves have formed amid the expanse of the High Knob Landform, with Gilley Cave being the destination of a recent Appalachian Cave Conservancy ( ACC ) trip on October 22. 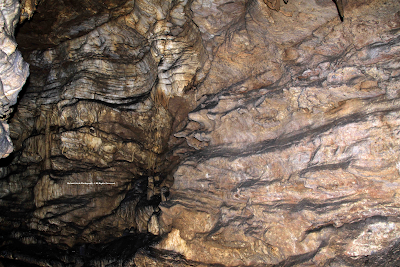 [ ALL CAVES must be treated with the greatest respect! ].

Gilley Cave is interesting for many reasons one of which is that it has formed in the Knox Group, within the same geological formation hosting the famed Natural Tunnel. 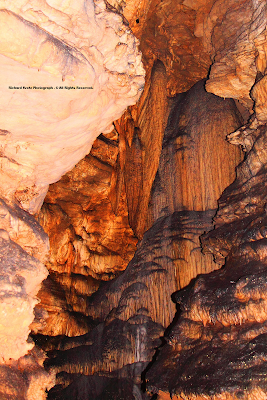 Flowstone is a product of deposition of a carbonate mineral called calcite, and although it may look rigid it can be damaged by only the softest touch.

It must be remembered that these Richard Kretz photographs were taken beyond the zone of light penetration, amid a total and complete type of darkness unknown to those having never before been deep within caves or mines.

It is here that amazing & unique environments exist for the development and support of a surprising diversity of life forms, many endemic to a specific cave or drainage basin. 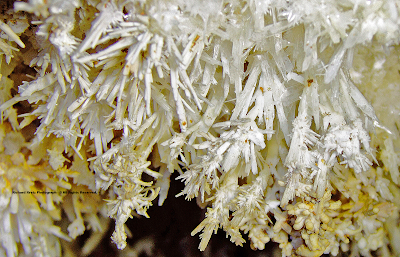 Aragonite is the other carbonate mineral that often occurs along with calcite in caves; although, it possesses a different crystal lattice than calcite to generate different forms like these lovely but very delicate flos-ferri flowers. 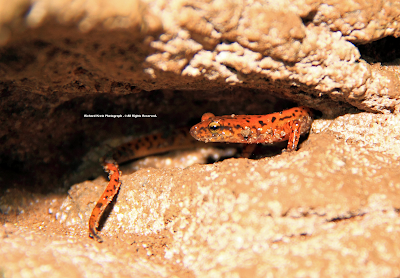 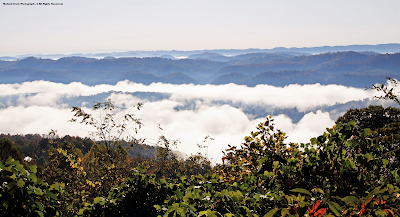 It is when the surface and subterranean are joined as one that the true and vast significance of the High Knob Landform emerges as the rarity and richness epicenter for limited range species within North America, by union of the Upper Tennessee and Upper Cumberland river basins.

Map Adapted from Precious Heritage:
The Status of Biodiversity in the United States 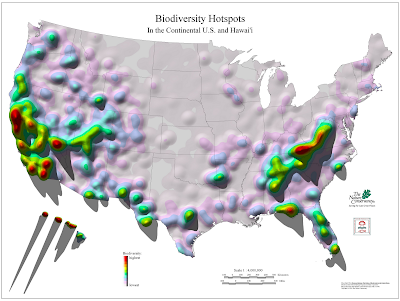 With a total vertical life range zone of at least 4,670 feet it has plenty of room for a vast variety of habitat types to support a yet unknown amount of total biodiversity ( * ).

( * ) - The elevation span across the High Knob Landform between its highest point above the surface and deepest subterranean cave currently known ( the deepest east of the Rockies and north of Mexico on the North American continent ). 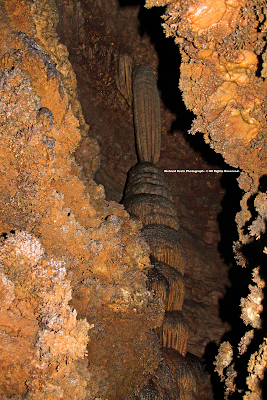 Much of this unknown biodiversity resides in huge groups of organisms with many species such as bryophytes, fungi, insects, and microorganisms galore ( including many endemic cave organisms ). 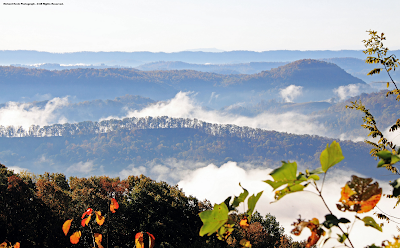 As the "highest" organism of them all we are most foolish if for a moment it is believed that what lives amid such a complex surface + subterranean landscape is known, or even understood in how it all fits together to impact the whole! 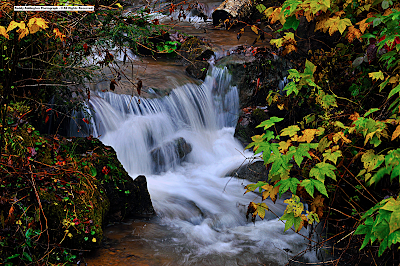 The final significant storm event of October 2011 generated more than 1.00" of total precipitation across much of the High Knob Landform to boost monthly tallies into the 4.00" to 5.00"+ range.

Climatologically the month of October is typically the driest of the year across the High Knob Landform, with 2.50" to 3.50" amounts being more common from lowlands to highlands. 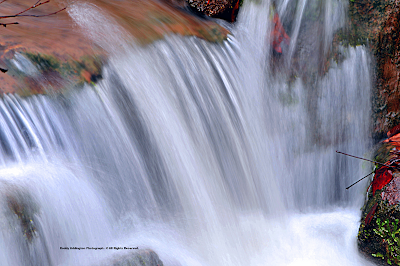 This sight is a great local blessing often taken for granted, in a world lacking abundant, clean water.

The High Knob Massif retains more than 1 BILLION gallons of water in just its five main mountain top lakes, with 632 Million gallons held in Big Cherry Lake alone.  Many more gallons are held in wetlands and other ponds across the massif.

An untold number of gallons are held INSIDE this great remnant massif by extensive subterranean conduit systems. 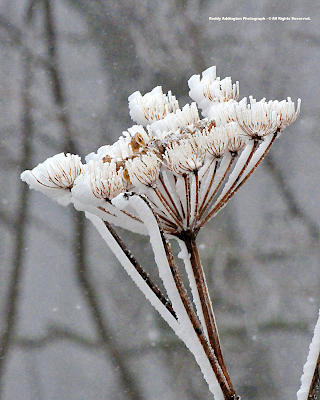 Rain changed into snow during evening hours of October 28 in the highcountry surrounding the High Knob peak to mark the third wintry event of this month. 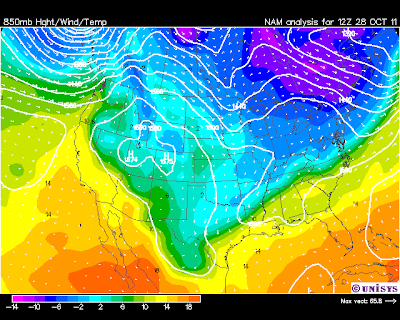 Although all three events were minor snow makers for this massif, the setting for October 28 featured low-mid 30s air temperatures all day and a lack of snow only due to a warm layer aloft at the 850 to 750 mb level nosing northeastward from the Tennessee Valley.

If all three events could be added together the total snowfall would likely not exceed 4" to 5" at the summit level; although, most places never had more than 1" on the ground at any given time.  Clearly the significance was in the number of early season events, not in their snow production. 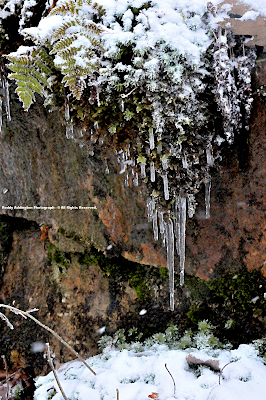 There appeared to be some high elevation icing on the low-level easterly upslope prior to a switch to all snow and gusty NW winds into early hours of October 29. 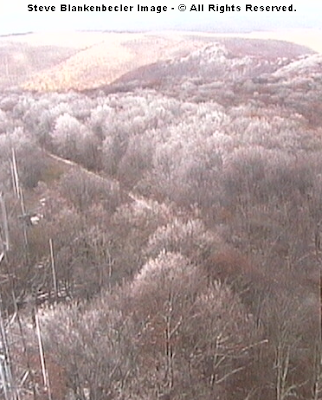 A blaze of shining whiteness was observed when sunshine returned into the afternoon, as captured by my friend Steve Blankenbecler.

It was impossible to capture an image with any distance when my friend & photographer Roddy Addington was there during the morning, by contrast, since the entire crest zone was obscured in icy, cold clouds with light snow falling. 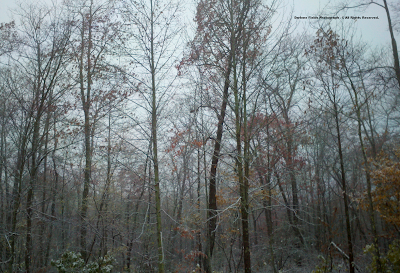 Dropping just below the main crest zone a much lighter coating was observed on trees in the High Chaparral community.

In both images above note the distinct lack of leaves as trees across much of the High Knob Massif are now largely bare at higher elevations, with hollows and sheltered locations still holding some foliage.

Elevation 3300 feet
Fluffy Snow On The Ground In High Chaparral 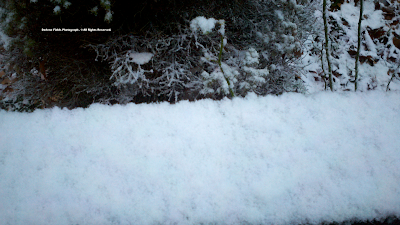 My friend Darlene Fields shows a little better coating of snow on the ground beneath the trees.

Elevation 2650 feet
Long Ridge of the Tennessee Valley Divide
The Rose And The Snow - October 29, 2011 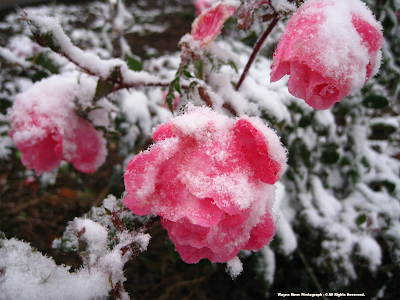 Wayne Riner Photograph Thoughts...
"This little rose has provided color & beauty all summer. The blooms are now bowed with the weight of the first snow to blanket Long Ridge."

[ Light snow accumulated enough to cover grassy surfaces, leaves, and above ground objects from portions of Norton into the Wise and Sandy Ridge plateaus ( mainly above 2000 feet ) ]. 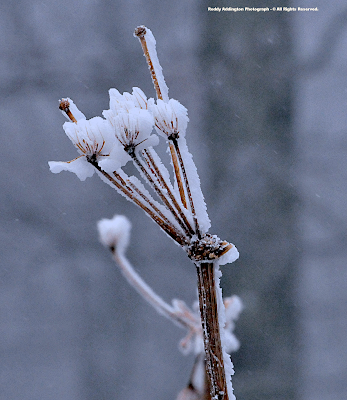 Not being able to see very far never deters Rod, the master rime photographer of this region! 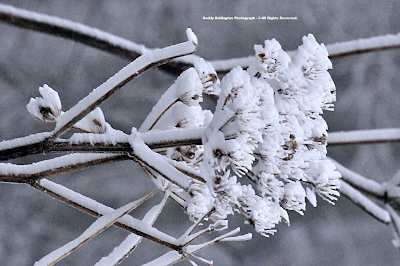 The amazing windward growth of rime is very evident upon turning this photograph on its side, revealing clearly the incredible one sided nature of its accumulation.

Remember that rime is the visible product of moisture extraction by trees and vegetation of frozen clouds of water vapor.  It is a major secondary moisture source in the High Knob Massif during the cold season, having been well documented on this website.

A Starting Point - Introduction To RIME

When rime melts you get this... 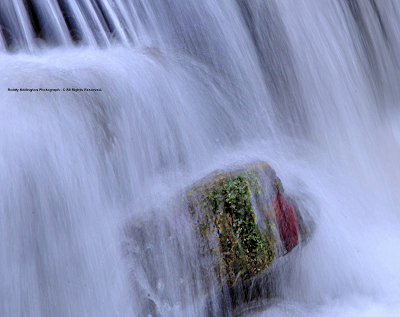 October 30, 2011
Long Ridge of the Tennessee Valley Divide
Looking Up At The Last Colors Of Autumn 2011 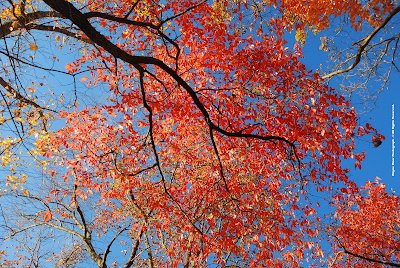 Wayne Riner Photograph Thoughts...
"Late in the season of fall colors,  let's just stop and look up at the maple leaves against the October sky."

My friend Wayne Riner highlights in his great photography a truly amazing feature of this most wondrous Appalachian landscape, the protective effects of the middle elevation thermal belt zone in which him and wife Genevie live, as do so many others across Dickenson & Wise counties.

The thermal belt in this area consists of ridges and exposed plateaus which rise into the 2000 to 3000 foot elevation zone, below and above which temperatures tend to be much colder throughout the year ( especially in mountain valleys at night ). 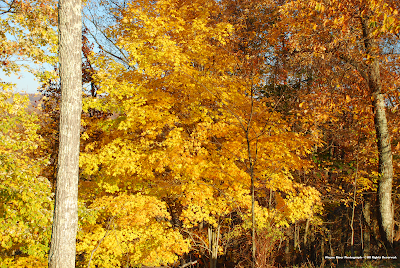 Wayne Riner Photograph Thoughts...
"The late evening sun brings a life of color to a group of small maples.  They will soon be barren." 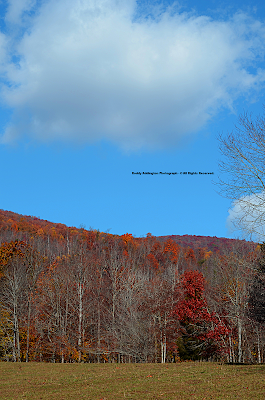 The next day brought snowflakes to High Knob for the 4th time during October 2011, with gusty winds and a fury of flakes for at least a brief time during Halloween day.

Doppler Radar At Time Of Snow On High Knob 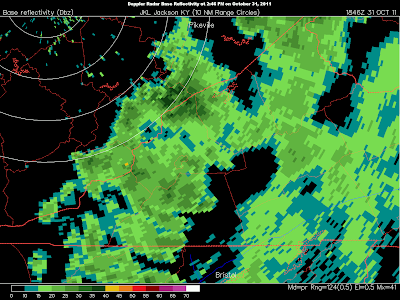 Temperatures at the summit level dropped to 29 degrees for a time during the early afternoon of Halloween, amid gusty S-SW winds of 10-20+ mph.  BRRR........