A Different Start To Spring 2013 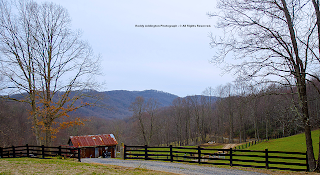 The view in early April 2013 is strikingly different from that observed one year ago as a cold, snowy opening to Spring 2013 has it running way behind the anomalously warm Spring 2012 opening.

Roddy captured only a few budding maples around
the high pastures of Maple Gap above, in contrast to significant patches of green observed one year ago
when beautiful Trilliums were also in bloom!

Although this weather pattern is finally beginning to change, at least through the coming week, the first week of April this year was much colder than observed in 2012.

This is all part of the wondrous spring emergence differences which make the High Knob Landform and southern Appalachians simply spectacular during this time of year.

The December 1 to April 5 period was also wet in this area with up to 31.00"+ of total precipitation amid the main crest zone of the High Knob Massif, from Bowman Mountain across Big Cherry Basin to the Maple Gap - Thunderstruck Knob section. 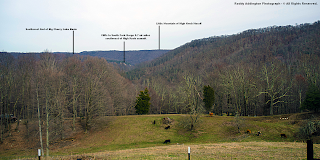 The country labeled above is located just off the
far right end of this photograph by John Mullins.

The view southwest of this photograph being labeled below, with Roddy's photograph of April 3, 2013 located within the section near the Maple Gap Karst Fields ( looking toward the line marking the southwest end of the Big Cherry Basin section ).

Big Cherry Dam is 1103 vertical feet lower than the peak of High Knob, with the basin of Big Cherry Lake sloping upward from southwest to northeast to the summit level of the sprawling massif.

Choosing a view from above, it was hard to
beat the Autumn Color Show of 2012.

The next few weeks should see spring emergence accelerate, with April 15 to May 15 typically being the most explosive period of floral and faunal activity across lower & middle elevations ( * ).

Mid May to early June completing the "green up"
across upper elevations of the High Knob Massif.

*More cold, even wintry, spells are likely
to occur during this time period.
Posted by Wayne Browning at 4:30 AM