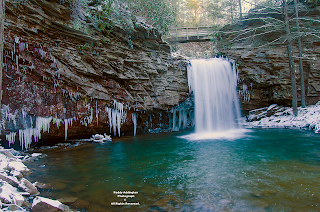 The winter pattern of 2013-14 has been wet since
a White Thanksgiving was produced by a major storm system at the end of November 2013.

A total of 13.84" of precip have been measured in the official NWS rain gauge at the City of Norton WP since the Thanksgiving Holiday
( 51 day period or 7.3 weeks ). 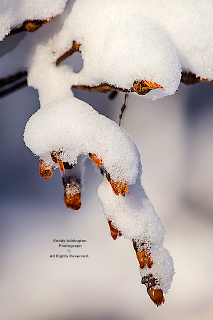 A missing ingredient amid all this precipitation, even in the High Knob Massif where more than 15.00" fell since Thanksgiving, has been SNOW. 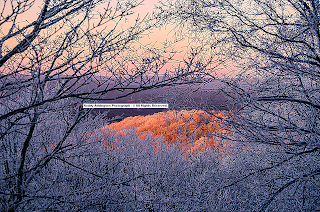 January 3, 2014 at 9:20 AM
High Chaparral of High Knob Massif
Time For Another Bird Feeder Fill Up 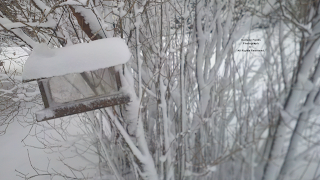 At least, given such significant precipitation amounts and intervals of intense cold the snow to rain ratio ( and I'm not talking snow density ) has been MUCH below average for this snowy massif. 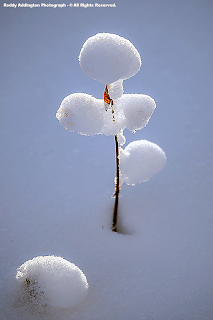 A sprout like that should be buried in snow by this time, given so much precipitation, but not during Winter 2013-14 when SW Upper Air Flow has ruled the bulk of precipitation events. 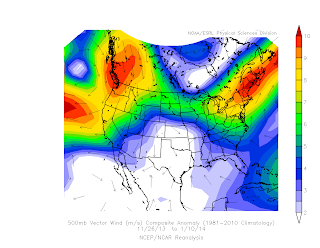 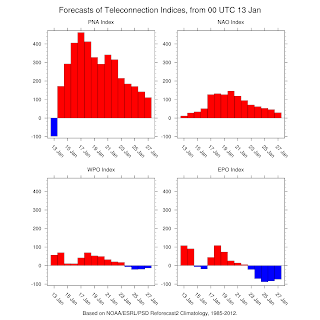 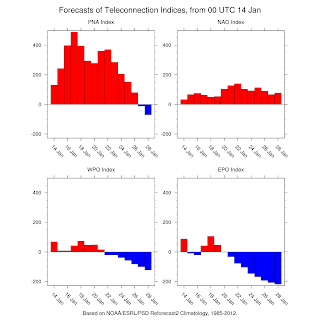 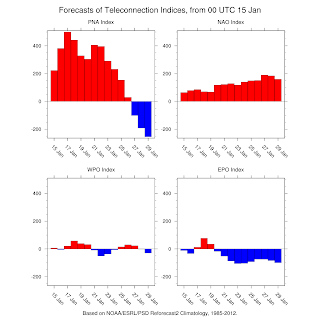 A significant shift from a prolonged -PNA into a potentially prolonged +PNA oscillation signals a major change from recent weeks and sets the stage for longer lasting coldness and multiple snow chances more typical of winter in the Appalachians.
( Until the February pattern can be better resolved ) 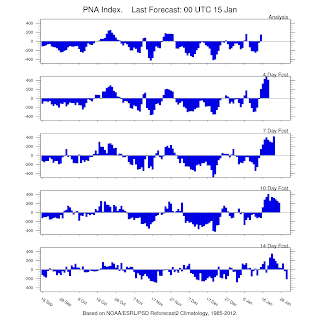 Note that a -PNA has dominated the Autumn-Early Winter of 2013-14 ( analysis graph above ), with the last significant upward spike of short duration coinciding with the Thanksgiving 2013 winter storm that dropped 5-8" upon the City of Norton-High Knob Massif area.

The previous significant +PNA period, centered around October 25 in 2013, being associated with the first round of accumulating snow of this season in the
High Knob Massif ( 1-3" snow depths ).

While model snow emphasis shifted from the January 15 system to that of January 17-18, as regards being most significant, snow showers and locally intense, hit-miss squalls remain likely across the mountains during January 15.

Case in point, The Little Snowman of High Chaparral. 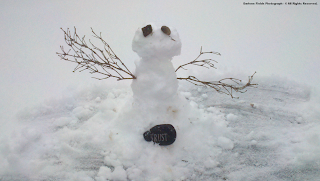 Up to now a 2 wave attack has been the dominant one upon the Polar Vortex ( Wave 2 it is called ) which initially worked to trigger the first two arctic blasts of early January 2014 ( the second one, of course, being the barbaric blast ) by squeezing, or compressing, the vortex such that blobs of bitter air were pushed southward into the USA against an otherwise unfavorable pattern for severe cold ( the blasts were progressive & relatively short-lived ). 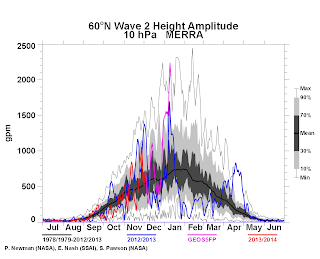 This continued Wave 2 action has now split the vortex
( partially split ) into two pieces through the depth of the stratosphere between 100 MB & 1 MB, but without having a major disruption to its core ( no major stratospheric warming event or wind reversal has even come close to occurring amid the 60 degrees North and 10 MB sector, but the vortex has been weakening as illustrated by temp rises observed above the North Pole at 30 MB ). 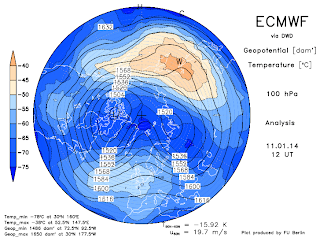 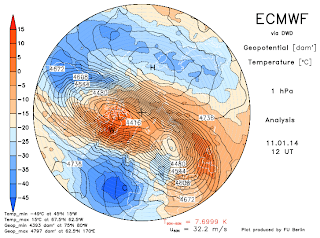 Although temperatures have warmed dramatically at the top of the stratosphere, with a positive temp gradient recently observed between 60 degrees and 90 degrees North latitude, another downward trend in the Mean Temperature above the North Pole at 30 MB reflects the potent strength of this Vortex. 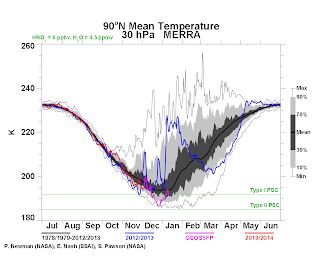 A decrease in zonal mean zonal wind speed also indicates vortex weakening; however, in both cases of core temperature & current westerly wind speed this Polar Vortex remains stronger than climatology despite Wave 2 action beating on it like a drum! 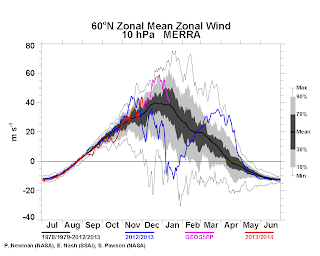 This is where a forecast Wave 1 ramp up during the next 5-10+ days enters the picture via what appears to be a tropospheric coupling between Aleutian Low pressure and Siberian High pressure. 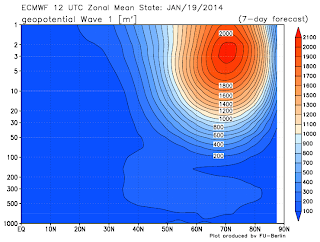 If this occurs as currently forecast it will represent a major hemispheric change from mean conditions observed during Autumn 2013-early Winter 2014. 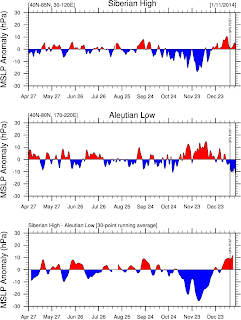 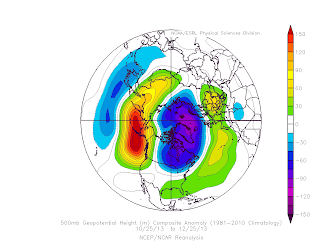 While there are wave and ozone induced warming events amid the stratosphere at various times during any given winter season, here the focus is upon the type of high amplitude wave induced warming that can breach the surf zone of the Polar Vortex and do major structural damage to its core via changes in both internal temp and vector winds ( changes in speed + direction ).

This section is under construction.  Check back for updates.
Posted by Wayne Browning at 11:34 PM