Continuous sounds of gushing whitewater accentuated settings
of photos 1, 3, and 5 in the picture viewer, adding greatly to the
majesty of this special watershed whose wildness offers forth
a bounty of precious water to all creatures great and small ( # ).

#South Fork of Powell River contains a 40 square mile watershed which is a high conservation area for the Town of Big Stone Gap, and surrounding region, upstream of Big Stone Gap Water Plant into the head of Big Cherry Lake basin and the High Knob peak.

This is part of a very rich Mixed-Mesophytic Forest possessing many diverse natural communities, both above and beneath the surface!

Reference South Fork of Powell River in
this section to view the diversity of species
indicated by awesome autumn colorations: 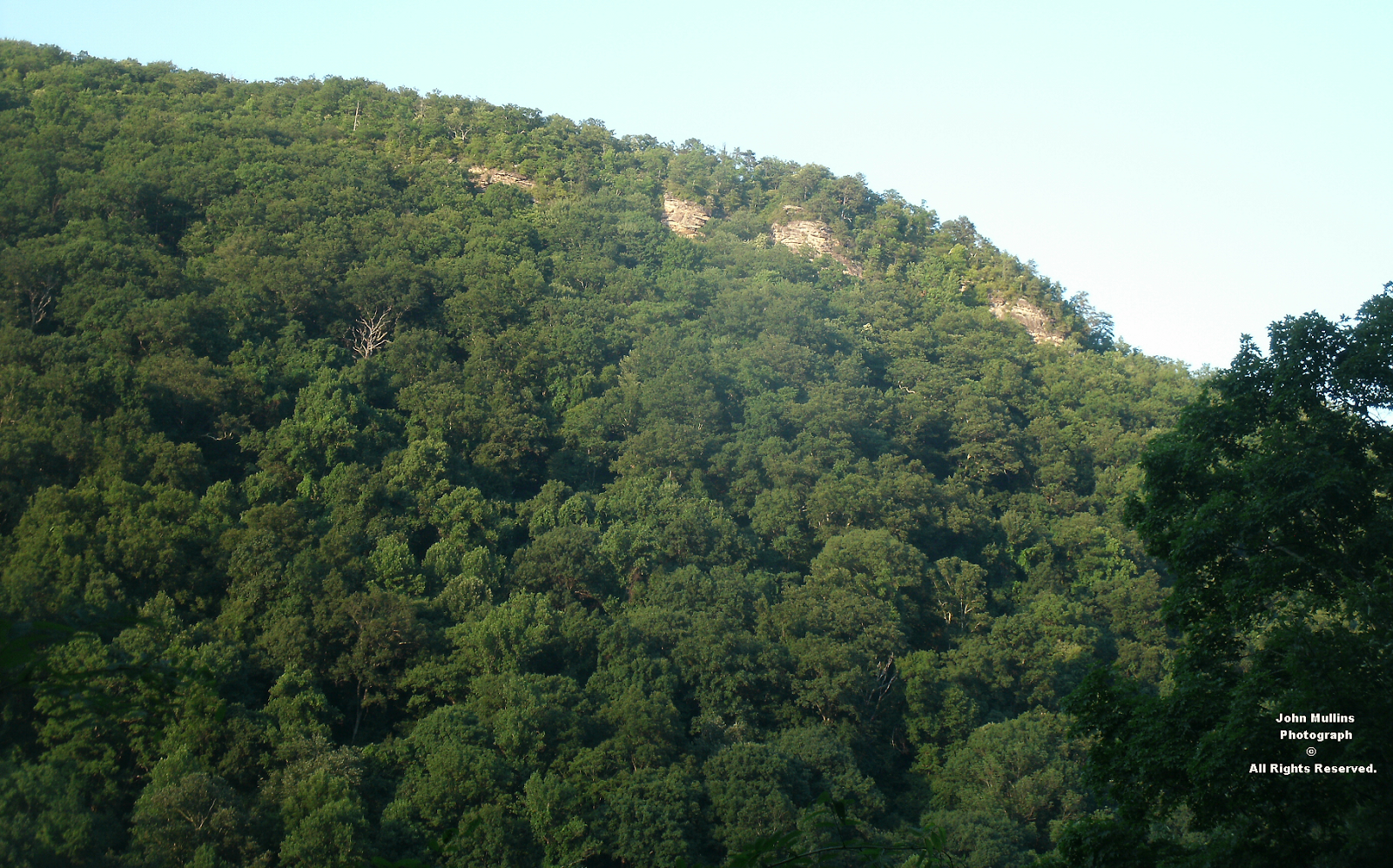 *The NWS rain gauge busted due to extreme coldness in January
with the late January-February total being partially based upon
an automated IFLOWS rain gauge at the Dam ( with missing data ).

Actual 2014 total is estimated to be around 36.07" due to missing moisture in snow too deep for the rain gauge to physically contain and between hand-measurements at the Dam throughout the year
( averaging 1 measurement per week ).

**Reported July 1-21 rainfall totals reached 5.71" at Upper Norton Reservoir, amid Benges Basin of the High Knob Massif, and 7.04"
on Robinson Knob above Bark Camp Lake where up to 16.00"+
of rain have fallen since June 1.

This is part of the wettest area in Virginia.  Reference the Climatology Section of
The High Knob Landform for details. Many Canadian Hemlock ( Tsuga canadensis ) trees continue to be infested and killed by the Hemlock Woolly Adelgid (  Adelges tsugae ).

Some trees continue to look healthy.  It is hoped that enough will survive this infestation to rebuild the population again ( up to 80% or more have died in areas infected since the 1980s to the east ).

Small Hemlocks are more healthy appearing verses large trees in most cases.  This is not the first time Hemlocks have been driven to near extirpation.  Around 5000 years ago a major decline occurred in the species across its range as indicated by paleoecological studies.

Hemlock's Future In Context Of Its Past History Hemlock Woolly Adelgids were first discovered in this area during 2007-08, having been confined to locations along and east of the
Blue Ridge for more than 50 years.  Their west spread across the Appalachians being coincident with a lack of harshly cold weather
( MINS of -20 below zero or lower ) since the middle 1990s and
the flip of the Atlantic Multidecadal Oscillation ( AMO )
into a positive phase.

South Fork of the Powell River twists southwest through this wild, boulder filled valley with a lateral stream erosion & undercut tendency being forced by southeastward dipping rock stratas during the first 2 miles below Big Cherry Dam.

This setting changes dramatically on
Miles 3 & 4 downstream of Big Cherry Dam as
a northwesterly stream flow begins to intersect southeastward dipping bedrock layers.  Lateral stream erosion and undercutting, indicative of Miles 1 & 2, gives way to downcutting from one layer to the next to form ledges with significant variations in both spacing and vertical depth.

A classic steep creek results that is merely a single product of this fascinating and unique geological and climatic setting. Dead trees standing on edges of Big Cherry Lake are mostly
post-dam related dying due to a rise in water levels following construction of the new Dam during 2005.  In some cases it is
likely related to the Hemlock infestation. Great Rhododendrons ( Rhododendron maximum ) were in
heavy bloom around the Lake and portions of South Fork Gorge.

Lake water has overflowed Big Cherry Dam throughout 2014 with exception of some days in June and July when levels were just beneath the spillway top ( ** ).

**A total of 41.687 Million gallons of water were
discharged from the Lake during June 2014
( does not include natural spillway overflow ).

( M ) - Indicates missing moisture in snow too deep for the rain gauge to physically contain and between hand-measurements at the Dam throughout the year.  Approximate actual total, if it had been possible to measure daily, was around 108.00" or 6.00" per month during the past 18-months.

Much more rain fell east to northeast of Big Cherry Dam during the May 1 to July 11 period of 2014, with greatest amounts impacting watersheds containing Bark Camp Lake and adjacent
communities ( # ).

#Wet-dry feedbacks have impacted the rainfall pattern during
the warm season of 2014, as typically occurs, with 2014 featuring tendencies toward wet feedbacks on the High Chaparral, Robinson Knob, and Coeburn side of the massif verses drier feedbacks on the Norton to Big Cherry Dam side.  All areas within the massif have received 10.00" to 17.00" of rainfall during May 1 to July 11, such that wet-dry feedbacks are relative to wetter verses drier places and not indicative of important drought stress. 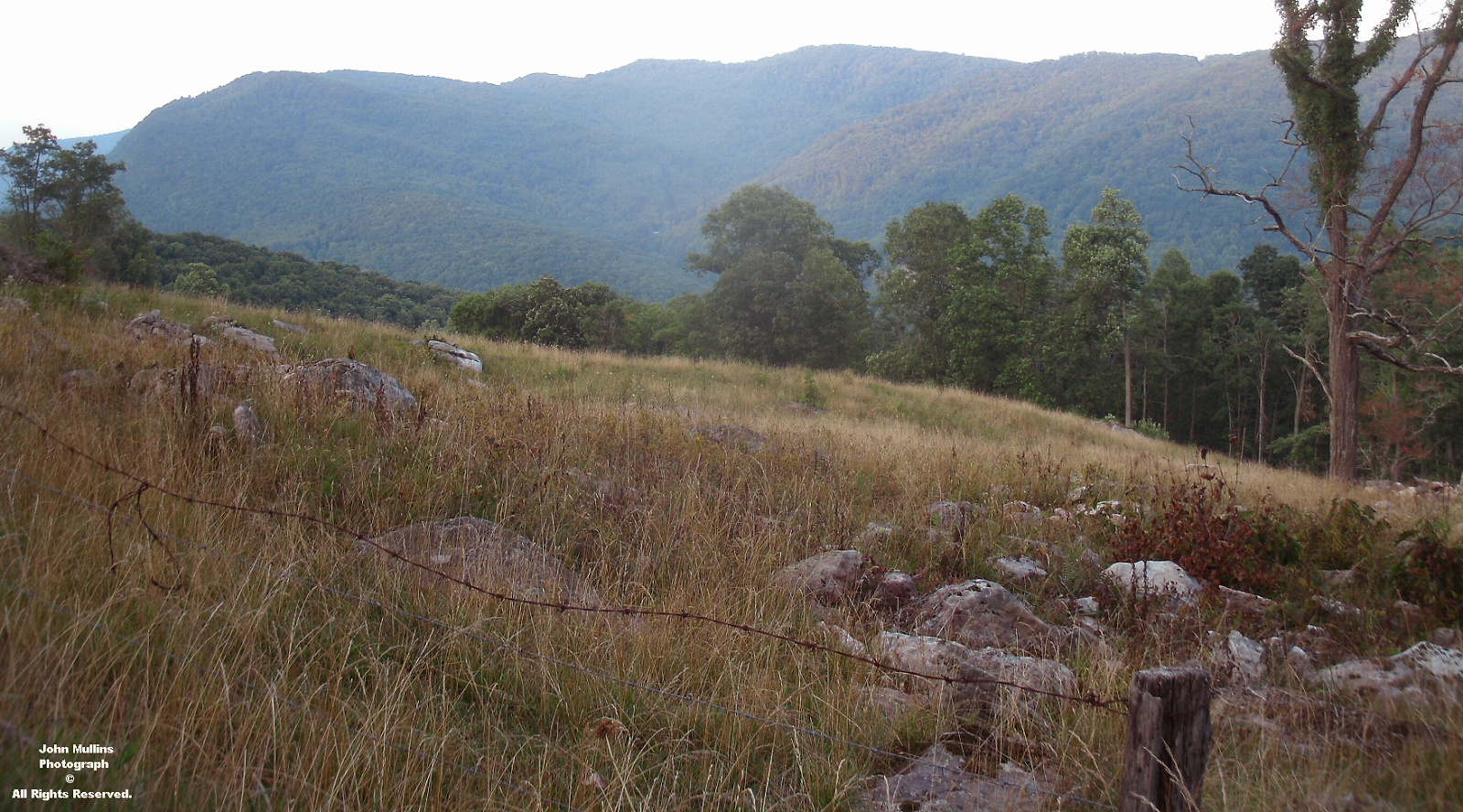 The basin of Big Cherry Lake spreads outward for miles
beyond the highest crestline visible in this photograph,
forming part of the crest zone of the High Knob Massif.

My friend & photographer Roddy Addington
has beautifully illustrated these scenes during
different seasons in past years. 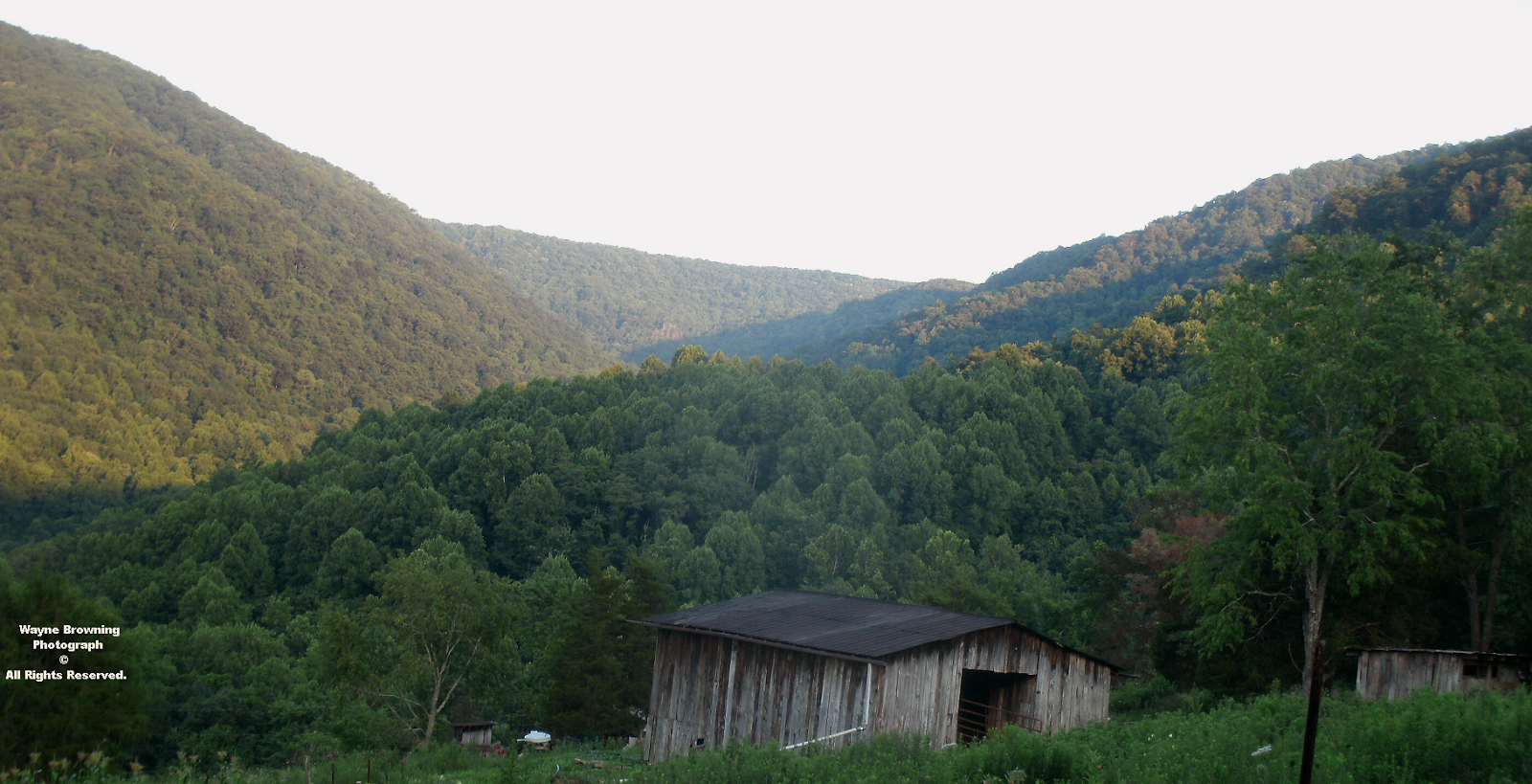 For a review of the first cool spell of July 2014, and subsequent heavy rain event, please reference:

A few days after July 8-10 rains another surge of showers and downpours in booming storms dominated the July 13-15 period. 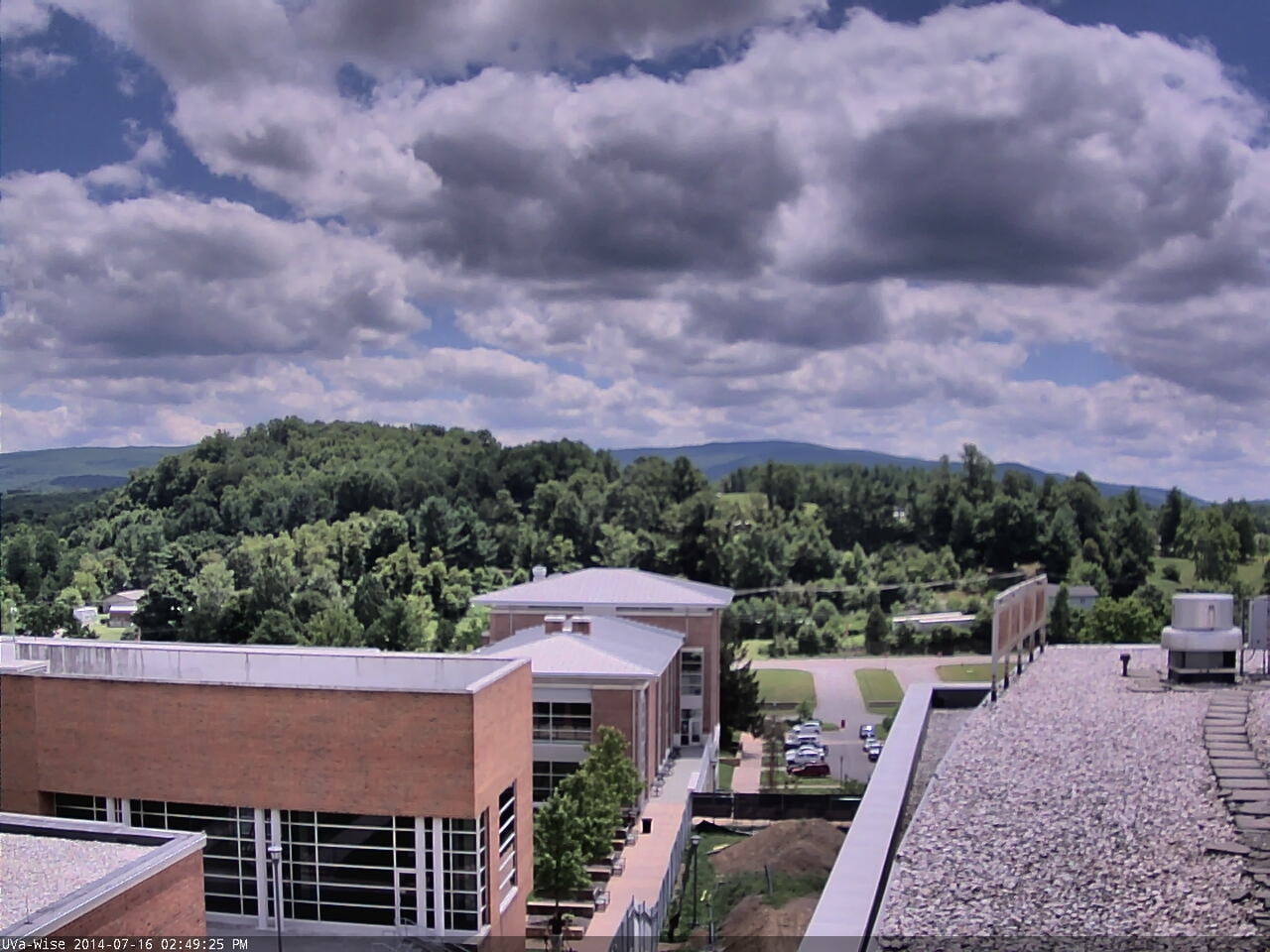 An air mass analogous to Independence Day followed with MIN temperatures dropping into
the 40s during morning hours of July 16-17. 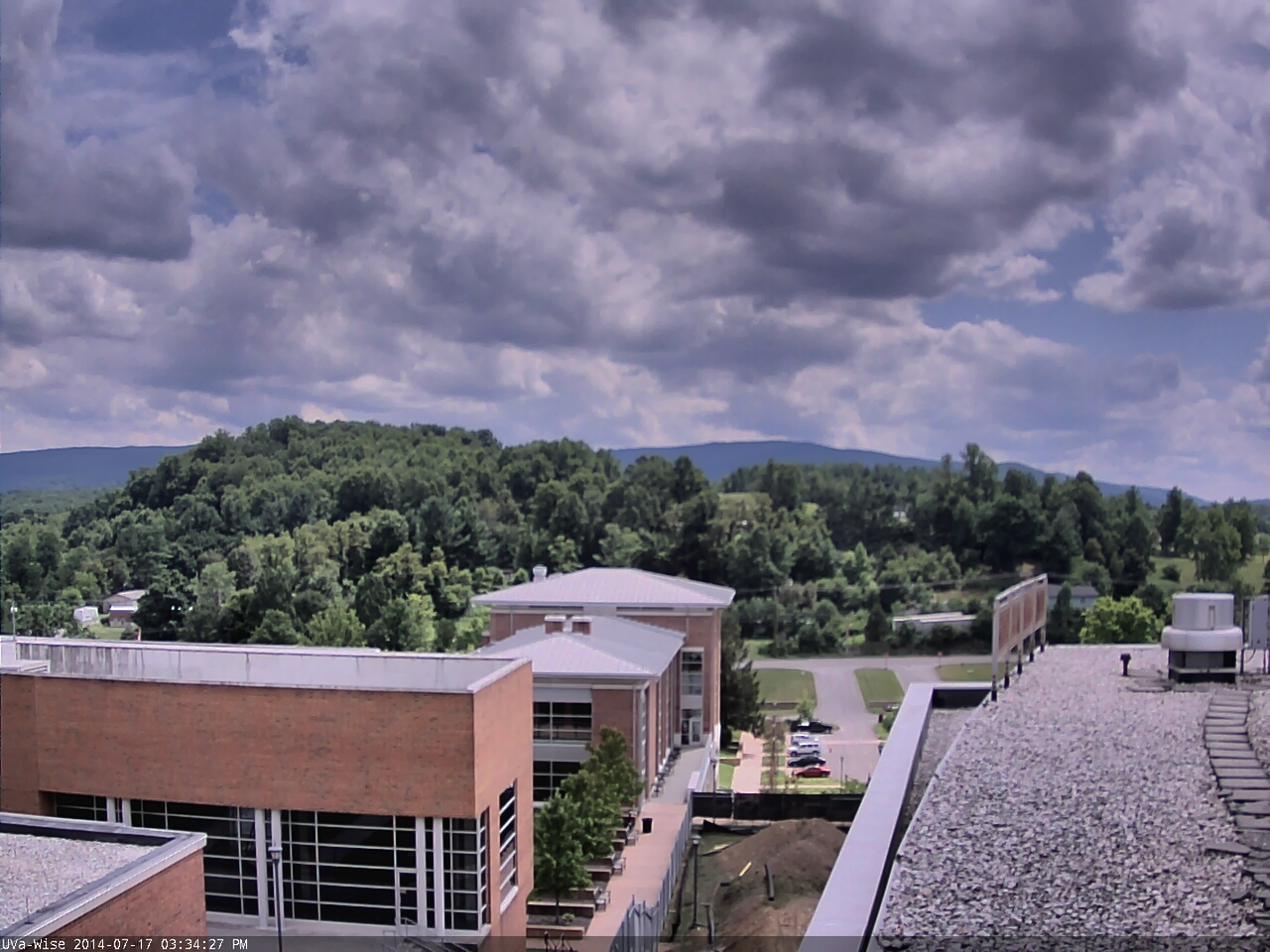 Morning hours of July 17 were coolest with
40 to 45 degrees in mountain valleys of
mid-upper elevations ( above 2000 feet ).

These were not record lows, at least for high mountain valleys, according to the long database in Burkes Garden where record minimums occurred during 1926 with 31 degrees on July 16
and 37 degrees on July 17.

July 18, 2014 at 2:23 PM
Engulfed Within The Clouds
Looking Toward High Knob Massif
University Of Virginia's College At Wise 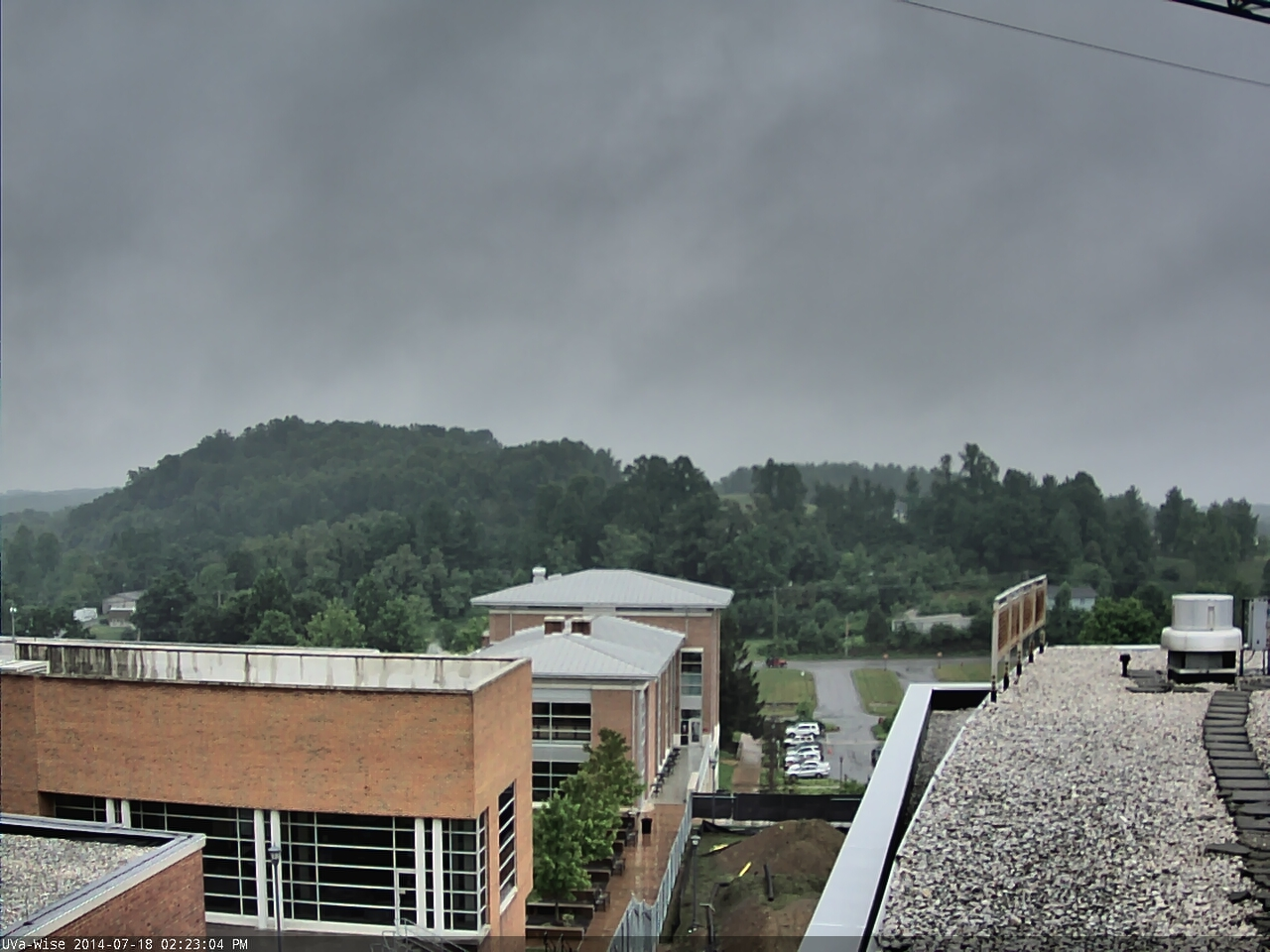 Clouds and all day soaking rain held afternoon MAX temperatures to only 50s atop the High Knob Massif and to 62 degrees in the City of Norton on July 18. 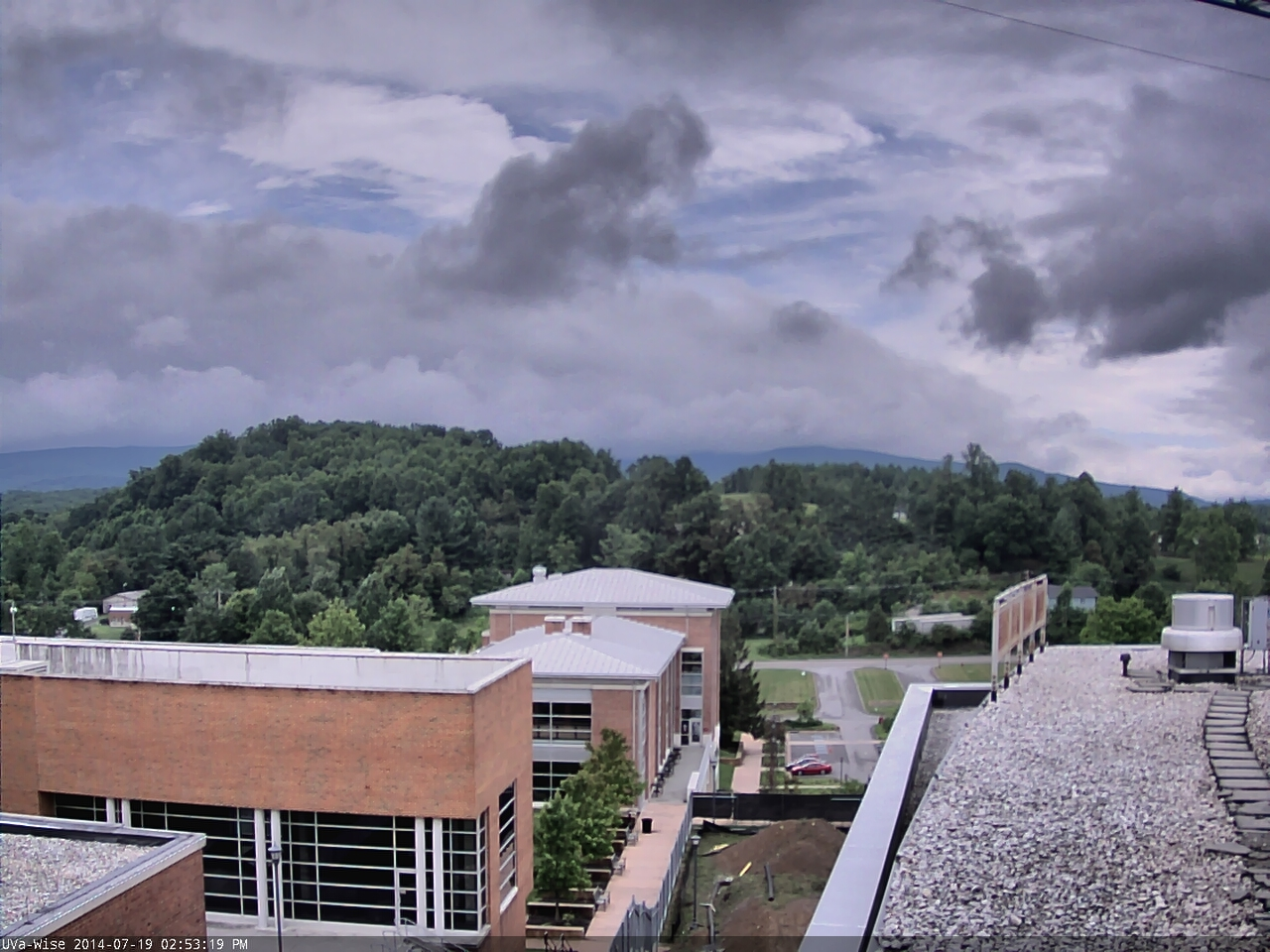 Preliminary rainfall totals of 2.50" to 3.00" occurred on S-SE upslope across Big Cherry Lake basin and the windward side of Black Mountain along the Virginia-Kentucky border (***).

***This was confirmed by Gary Hampton, Superintendent of the Big Stone Gap WP, who measured 2.95" at Big Cherry Dam where around 1/2 feet of water was overflowing the spillway July 21.

An abundance of summer rainfall has soaked the High Knob Massif since the start of Meteorological Summer on June 1, with significant variations in amounts over short distances.

The pattern producing this wetness actually
started around the middle of May 2014.

Parts of this corridor represent the only places in Virginia
to have reached 40.00" or more of precipitation up to this
point in 2014 ( January 1-July 21 ). 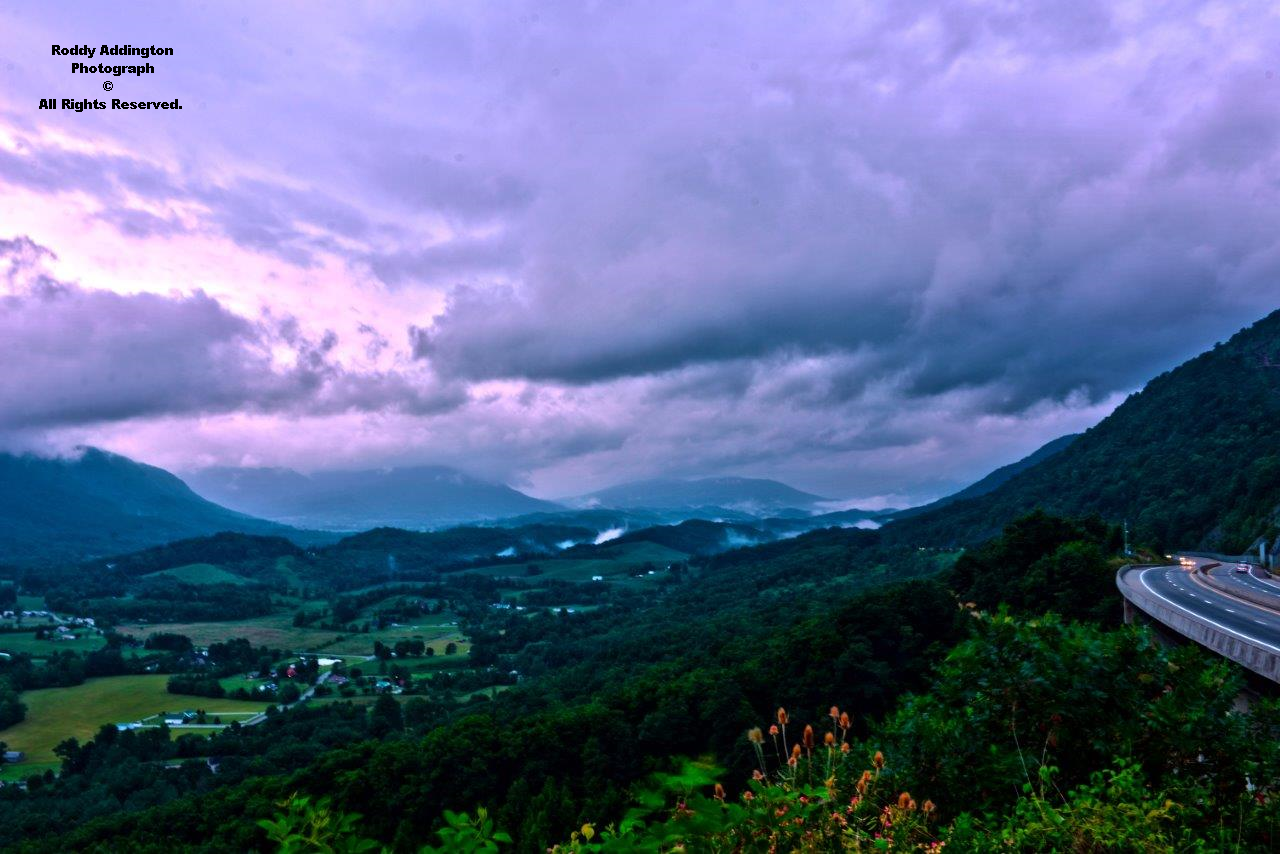 An often observed precipitation gradient has again developed this year across southwest Virginia, with wetter places in the High Knob Massif receiving more rainfall since May 1 than many places have observed all year ( since January 1 ) northeast,
east, and south of the Cumberland Mountains.

These statistics show an amazing contrast in
precipitation amounts this year, and have been
replicated many times during past years between
the High Knob Massif area and places to the east
and northeast across Virginia & West Virginia.

Even more extreme, consider July 2014
differences between these cities in Virginia:

This day began like many with a gorgeous array of fog lapping up against sides of the calcareous core of the High Knob Landform, but quickly changed as heavy rain producing storms gave way to lowering cloud bases and upsloping NW-NNW winds that engulfed its high country amid a different type of dense cloud vapor! 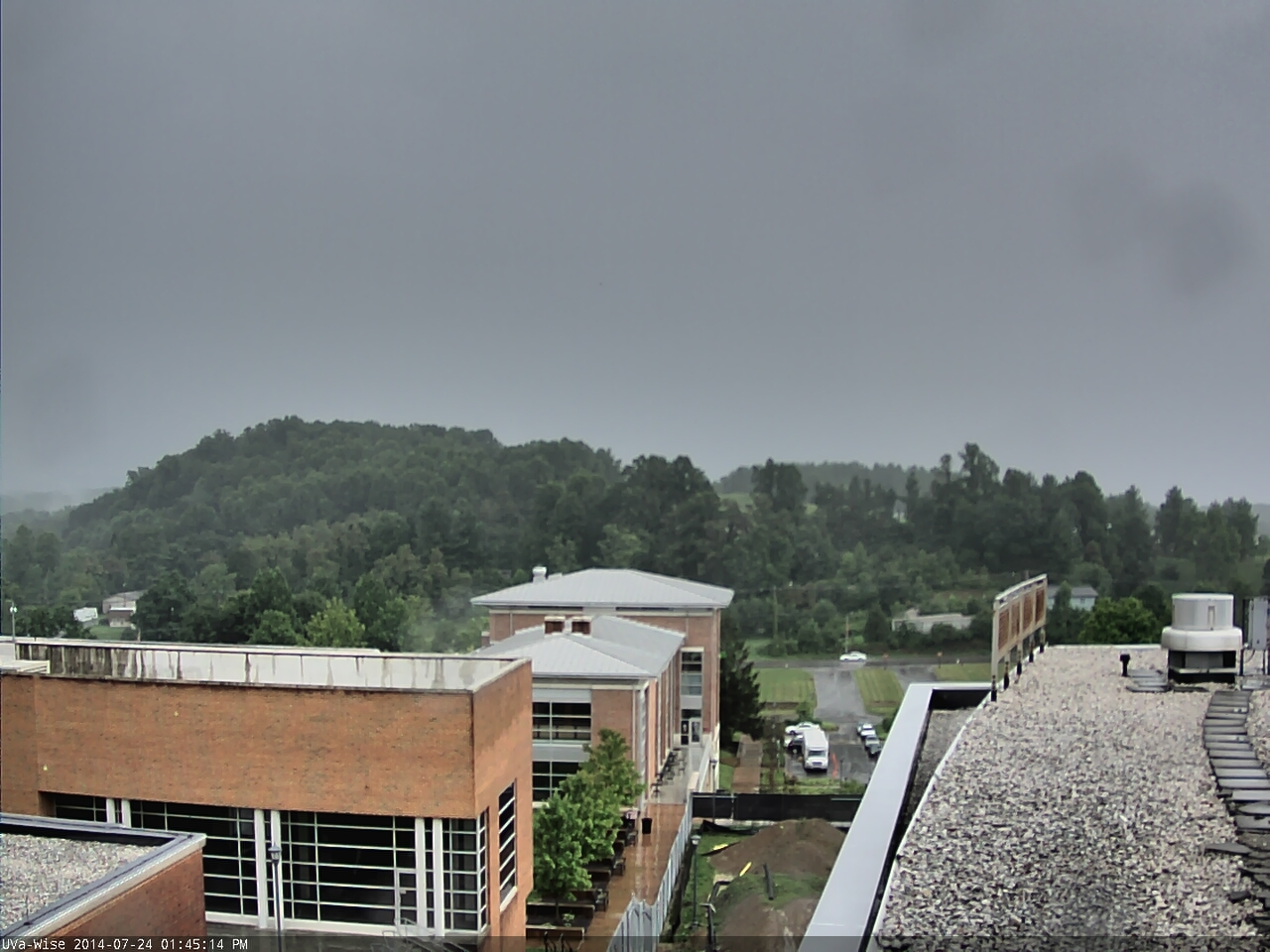 It is not unusual for the High Knob Massif to
be obscured in summer during showers and downpours in thunderstorms like occurred
amid early afternoon hours of July 24. 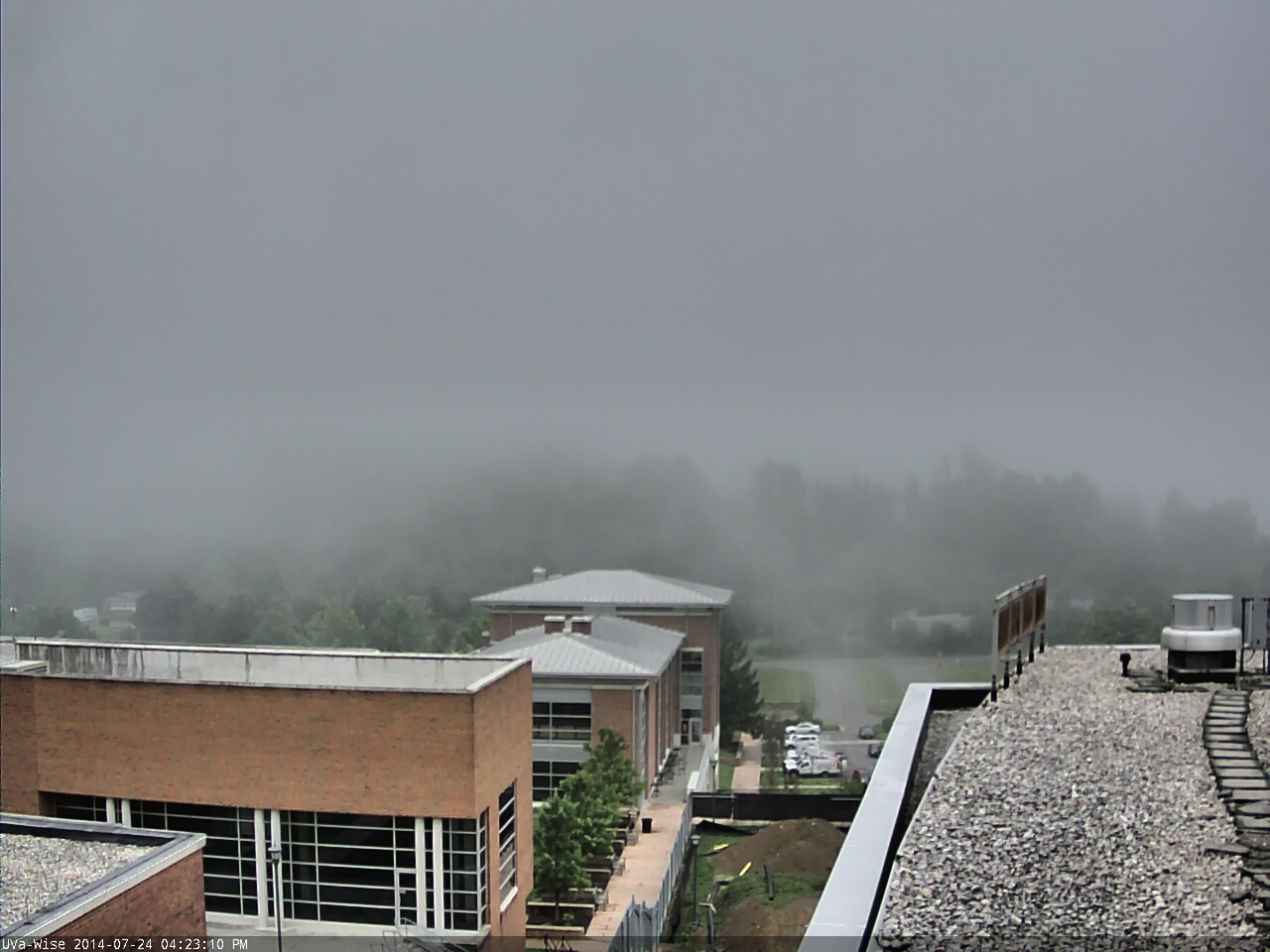 What followed, however, was atypical for the middle of summer with dropping temperatures, shifting WSW to NNW winds and a widespread lowering of cloud bases over and upstream of the massif on upslope flow like is so common during the COLD season ( this is still July? ). 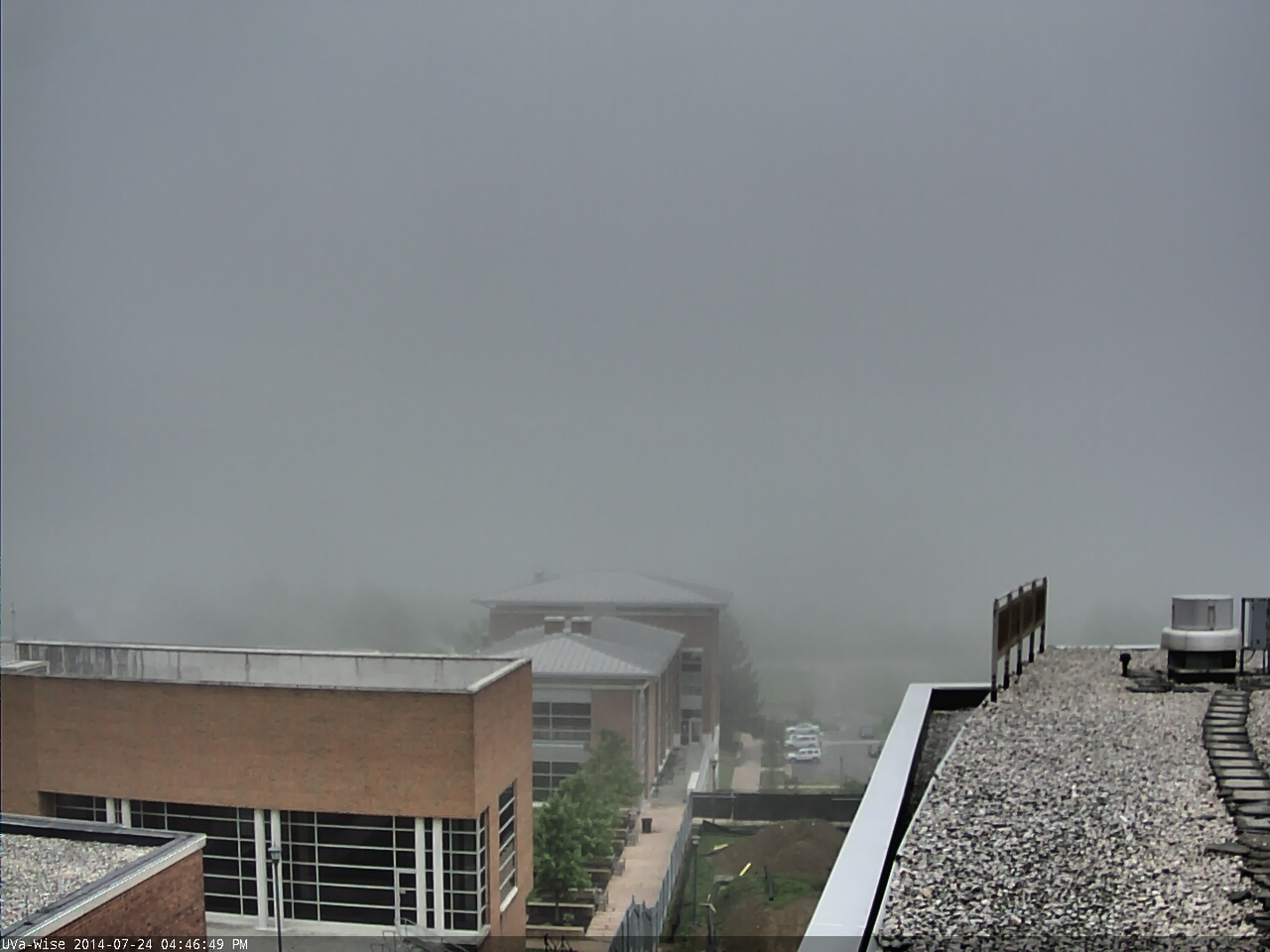 The difference, of course, being that dense fog
( clouds ) became widespread above 2000-2500 feet and prolonged in nature for hours behind
the cold frontal passage and not just associated with local upslope driven by thunderstorms. 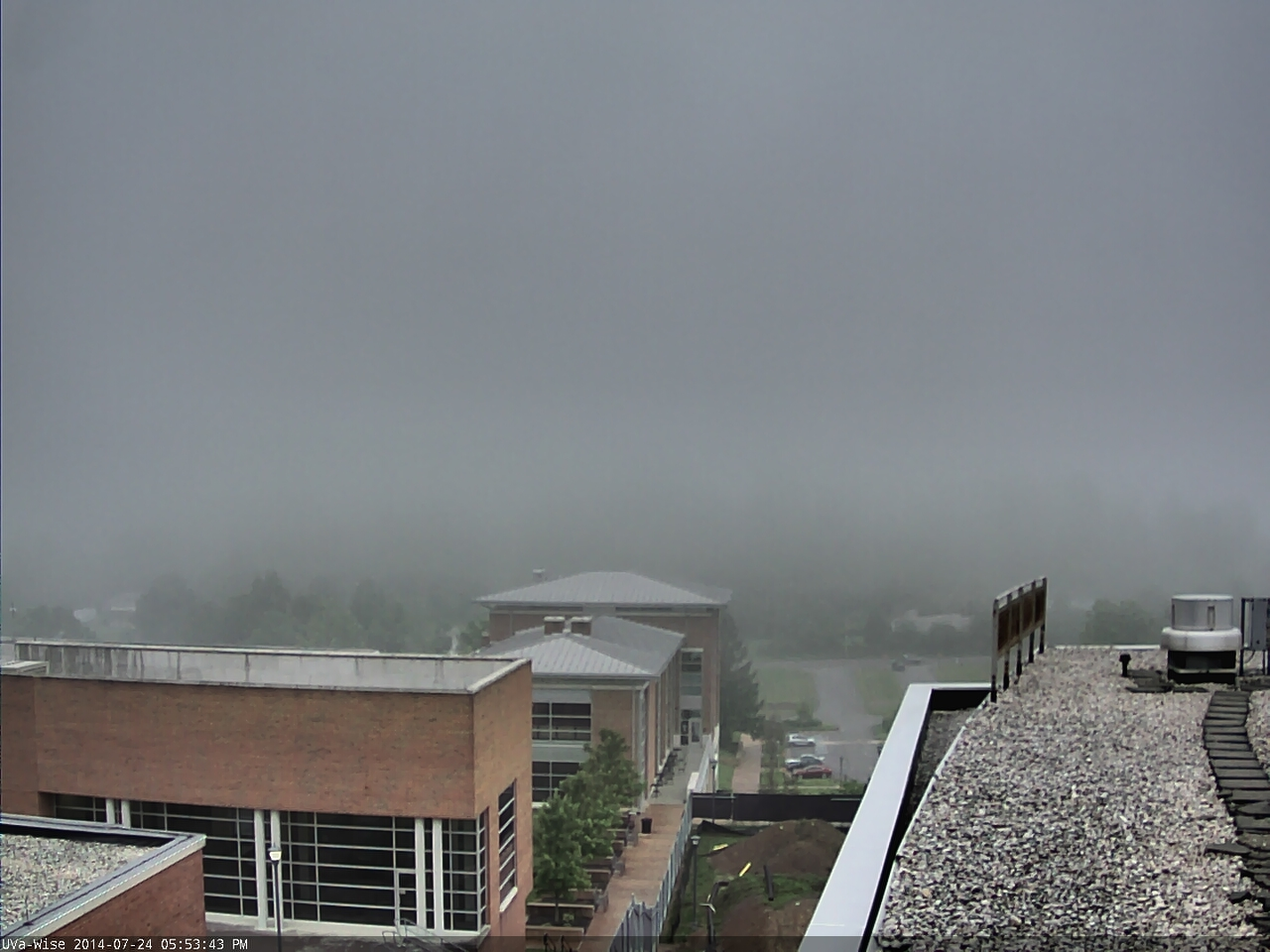 A chilly drizzle accompanied the fog as afternoon temperatures dropped into lower 60s in Norton
and Wise, with 50s above 3000 feet across the
High Knob Massif.  Just like an autumn setting! 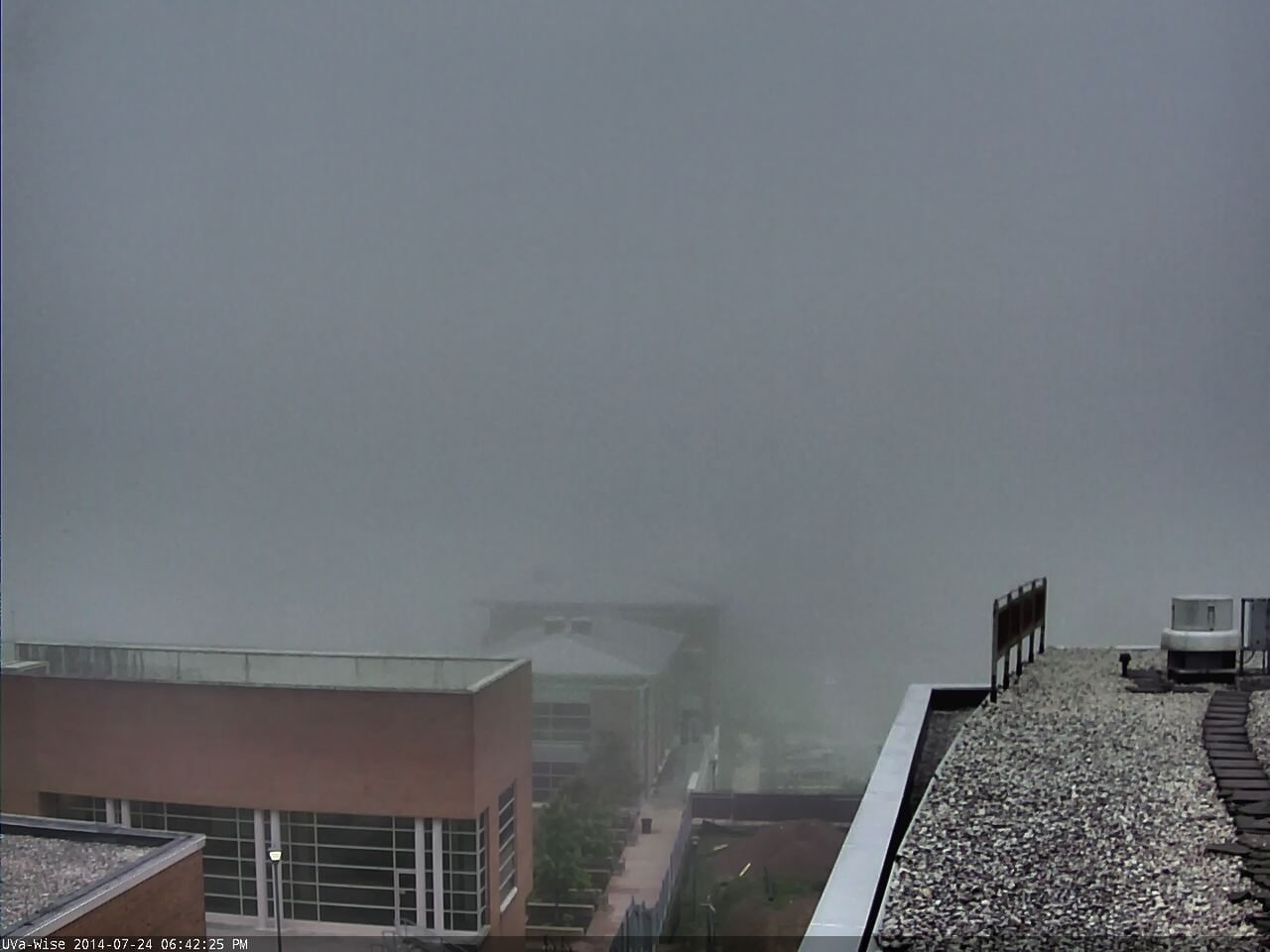 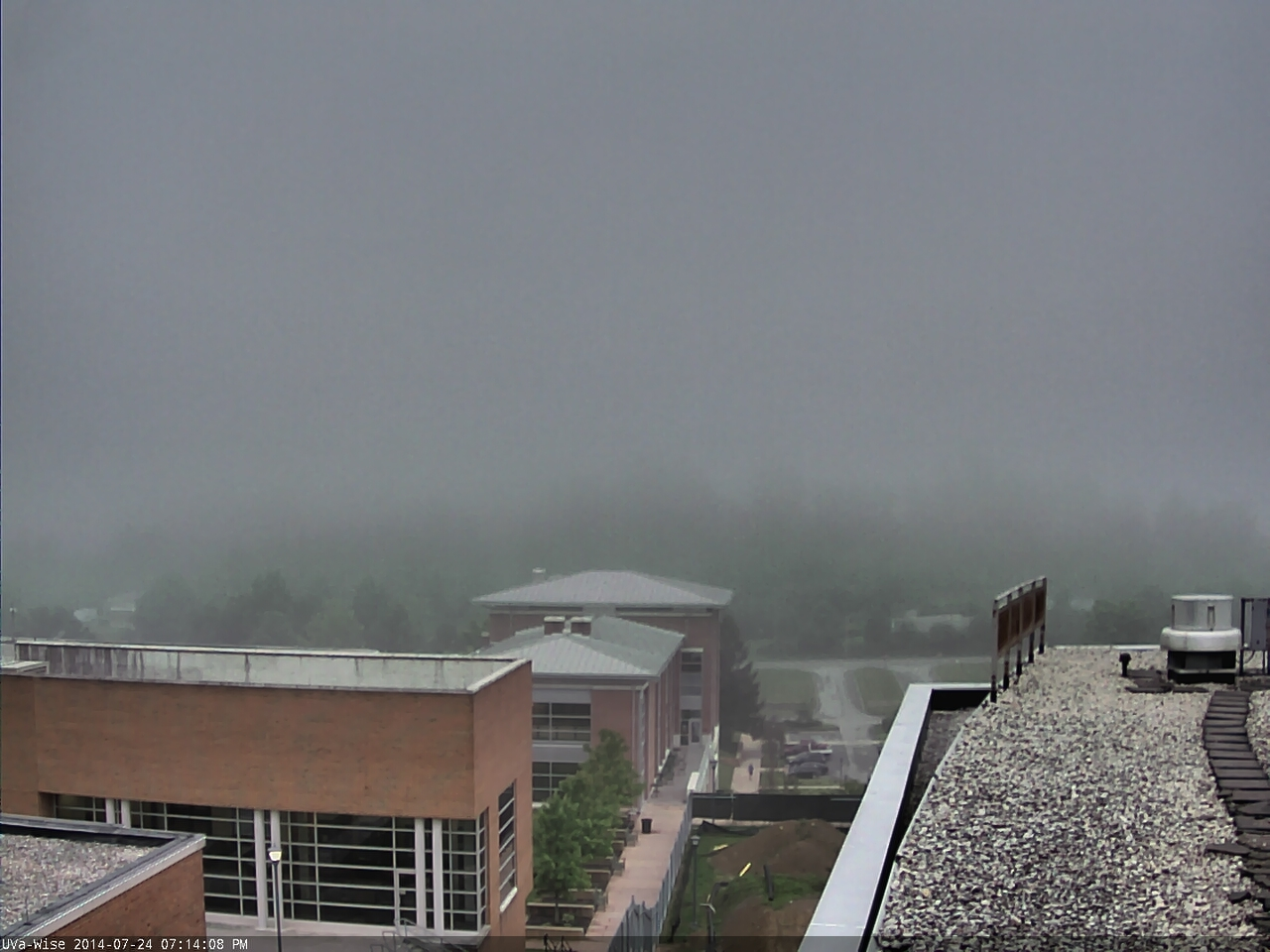 *Elevation above sea level at full capacity.
( M ) - Indicates one missing event during May
that produced 0.72" at Norton Water Plant. 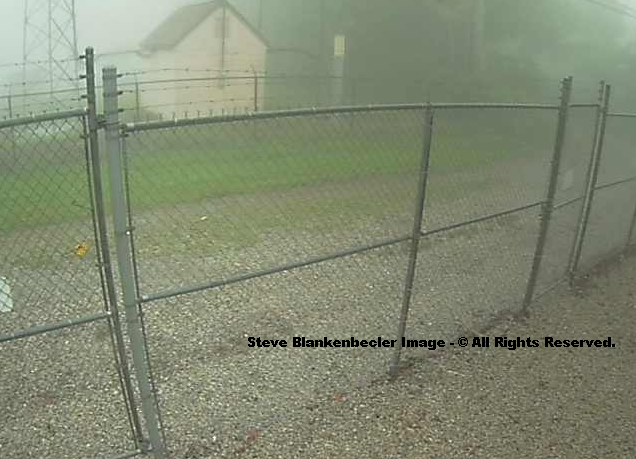 This event pushed the July rainfall total to more than 9.00" in the Robinson Knob community of the High Knob Massif ( ** ).

**A total of 7.56" reported by the Robinson Knob IFLOWS = 9.69" if using the mean observed difference between this IFLOWS and daily hand-measured amounts in Robinson Knob during six July's from 2006-2012.  NWS hand-measured rain gauge data courtesy of residents Otis & Nancy Ward. 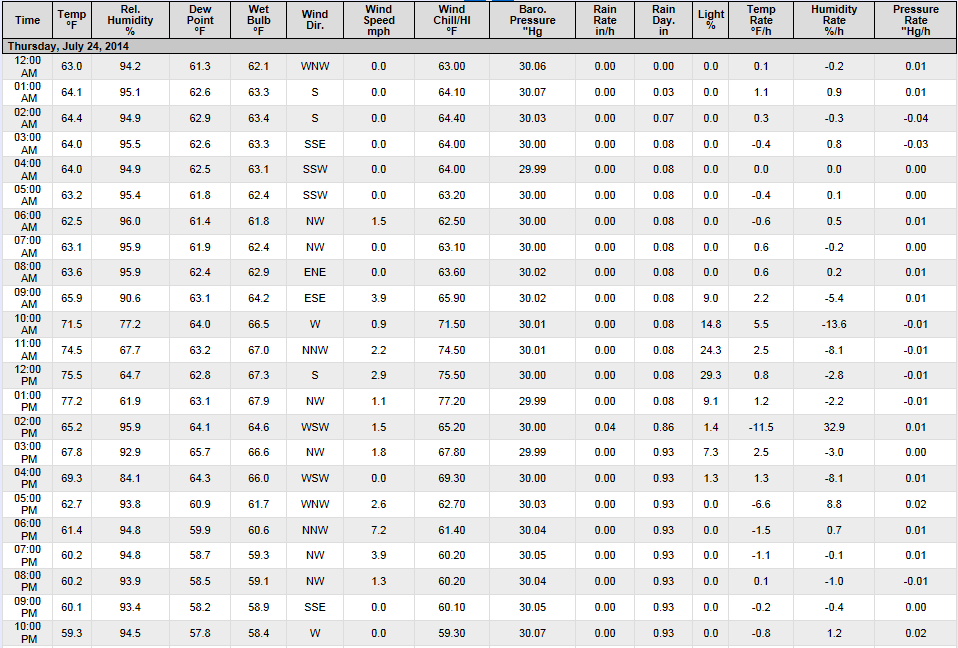