A blaze of gorgeous autumn color created the perfect backdrop for the 3rd Annual High Knob Naturalist Rally, sponsored once again this year by The Clinch Coalition.

The Rally was held on October 10 at Bark Camp Lake Recreation Area, amid upper reaches of majestic Little Stony Basin of the
High Knob Massif.

Despite low clouds, fog, a bit of drizzle, and temperatures falling from the 50s into the 40s, on upsloping northerly winds, the turn out for the event generated a warm atmopshere to welcome everyone!

The Boys Scouts of America, people fishing and paddling the Lake, and even a wedding ceremony were all part of a grand day.

Seemingly against all odds, autumn color is reaching a glorious peak above 2700 feet in the High Knob Massif.  The color season has been less than ideal on paper with driving rain, wind, and a distinct lack of deep blue skies and sunny days.

The daylight hours of October 9 featured ROARING southwest winds across the High Knob highcountry, with peak gusts between 30 and 50 mph being clocked all day long on Eagle Knob
( locally higher gust's, undoubtedly to 50+ mph, occurred in well exposed locations such as lofty High Knob and Camp Rock meadows ).

A few trees along the highest crestlines are bare,
or nearly so, as was evident amid simply brilliant color illuminating a fog-shrouded drive along Forest Service 238 on October 10.

The high basins of the massif, like those of Bark Camp Lake, Big Cherry Lake, High Knob Lake, The Glades, Benges Basin of the dual Norton Reservoir System, Upper Cove Creek, and numerous others, have offered some protection from the strongest winds, while also being cold air drainage corridors where frosty 30s have occurred numerous times since September ( helping accelerate color changes ).

Colors are currently spectacular from the viewing deck at Upper Norton Reservoir, just off of State Route 619, with some large trout recently biting as well amid the cold water lake!

An abundance of Maples ( Acer spp. ), which can be seen across mountain slopes of lofty Benges Basin from the viewing deck, combine with other species such as Sourwood ( Oxydendrum arboreum ) & Yellow Birch ( Betula alleghaniensis ) to enhance the color palette of these cool, mesic, northern slopes.


Crisp air & fog did not diminish the beauty!

Damp conditions at Bark Camp Lake have been perfect for Salamanders and Fungi, with both Justin Harris and Johnny Stanley finding some good specimens on their nature walks.

Justin led a hike which discovered 8 different species of salamander, while Johnny found an array of fungi to include the choice, edible variety called Hen of the Woods. 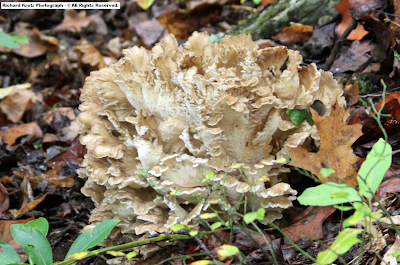 [ I apologize for the initial mis-naming of the above, as "Chicken of the Woods," as that was my mistake in writing ].

Another interesting discovery was the Green Quilt Russula Mushroom, which is part of a rather complex group whose lineage is being worked through via genetic sequencing.  So the scientific name given below will likely be updated to better define individual members of this fungi taxa.

A natural testimony to wetness within the
High Knob Landform this year, is a vast and interesting array of vigorously growing Lichens.

It is not uncommon, in fact, to find numerous different species on a single tree limb or trunk
( as documented below ).

The star of the show, however, remained the gorgeous display of distinctive colorations which are indigenous to each individual species.  Simply incredible is the magical handiwork of Mother Nature's paintbrush!

Although seemingly out of place at the very end of the growing season, when colorations denote the completion of this year's cycle, is the blooming of a shrub common in the Appalachians.

Appropriately, and by design, the blooms of Witch Hazel match the colorations of both it's leaves and the season at hand.  Amazing!

Cloud bases which obscured the highcountry in fog much of the day, would occasionally make their way down through mountain drainages to drap fingers of whiteness around gorgeous colorations.

It was amazing, even after all my years of climate research in the High Knob Landform, to watch how rapidly conditions could change.  Although skies never broke at all for any sunshine, conditions would rapidly change from having the surrounding color-laden ridges clearly visible, as exemplified by our group photograph, to being so foggy that one could barely see the Lake!

This was due to slight changes in wind trajectories during the day, which altered orographic forcing
( i.e., the upsloping ) such that it caused minor but significant, and rapid, fluctuations in cloud bases.

A renowned characteristic of many major mountain landforms across earth
( rapid weather changes ).

It would be so, that right when it was my turn to speak, cloud bases lowered, wind freshened, drizzle began to fall, and shivering commenced.  Was that a sign?

I guess the good Lord does indeed know how "long-winded" I can get, so he had mercy on everyone, as I felt so sorry for those shivering souls and nipped it in the bud ( i.e., I SAT BACK DOWN )!

The black and white Osprey, diving briskly up and down across the lovely Lake, capped off a truly magnificent mountain setting and put the finishing touches on what ended up being ( despite the weather ) a simply fantastic


Photograph by Richard Kretz - © All Rights Reserved.
Posted by Wayne Browning at 4:17 PM