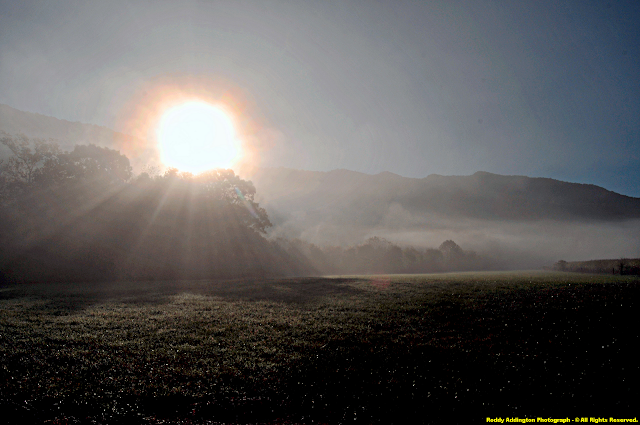 Photograph by Roddy Addington - © All Rights Reserved.
Sparkling like diamonds, a frosty cold autumn morning amid the majestic Cracker Neck of Powell Valley is illuminated by early rays of the rising sun, as captured through the lens of photographer Roddy Addington.
Pristine, cold, with a tinge of wood smoke to flavor the morning air, a low-lying fog spills outward from the mouth of the great South Fork Gorge of the High Knob Massif to mark a plume of cold air draining downward from the highcountry. 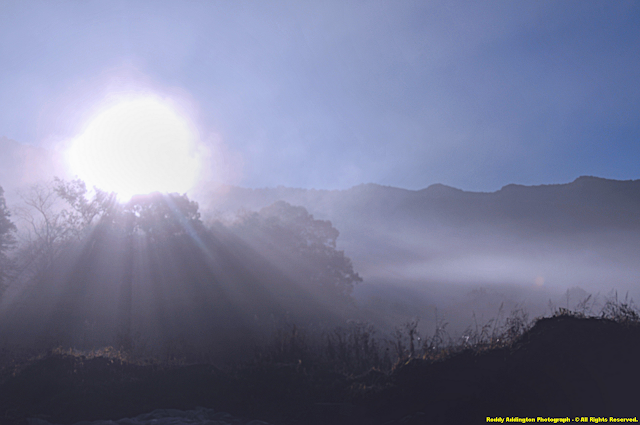 The overnight hours of October 21 featured extremely dry air amid the highcountry far above Powell Valley, with dewpoints in single digits above zero being common at the summit level of the High Knob Massif.

Dewpoints are a measure of the moisture content of the atmosphere, with very low dewpoints of between 0 and 10 degrees Fahrenheit being indicative of extremely dry air.

Low dewpoints indicate that the air has a potentially large cooling capacity, since under ideal conditions air temperatures can drop to the dewpoint.

Saturation occurs when the air temperature reaches the dewpoint.  Such a union is marked by the often magical appearance of condensed moisture, such as the frosty fog captured this morning by Roddy Addington as it spilled outward like a great stream of water from South Fork Gorge into Cracker Neck of Powell Valley.

Morning weather maps revealed the setting, as depicted below by the initialization ( or initial data input ) run of the NAM terrain model.

Image Courtesy of the Unisys Weather Processor
High pressure was centered over southwestern Virginia, with very dry air indicated by the pinkish colors on the chart in the lower right panel above.

Note in the upper left chart that air temperatures around the 5000 foot level in the atmosphere, or at 850 mb, were in the 50s.

This was indeed the case, with morning temps at the summit level of the High Knob Massif in the upper 40s to lower 50s.

There were 20s to around 30 degree readings, with HEAVY frost on the Valley floor seen above in Roddy's photographs.  With Fog to boot!

How could FOG and FROST form with such warm, dry air above?

The Big Cherry Basin of the High Knob Massif is a major cold air drainage and pooling area, as air drains off the 3500 to 4223 foot mountain ridges that ring the basin.  By the time air reaches the 3120 foot water level of Big Cherry Lake, it has dropped 1103 vertical feet from the peak of High Knob standing at the basin head.

[ Imagine how cold it can get up there on nights with snow cover, when the lake and wetlands are frozen over beneath a blanket of whiteness, with calm winds, radiational cooling in low dewpoint air, and downslope drainage off elevations as high as 4223 feet ].

A photograph from early September 2001 can be used to illustrate the layout of Big Cherry Basin.


Looking Across The Highcountry from High Knob Meadow 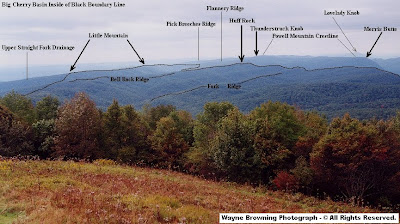 Photograph by Wayne Browning - © All Rights Reserved.
South Fork Gorge sits in between the Huff Rock peak and Morris Butte peak labeled in the above photograph, with the Valley floor from which Roddy took his majestic pictures located adjacent to where Morris Butte plunges downward ( below any point visible in the above picture ).

The solid black line in the above picture traces the approximate rim of the Big Cherry Basin, which sits completely above 3000 feet and represents the largest basin of its size in the entire 150+ air mile expanse of the Cumberland Mountains ( the small photograph above not doing it's large size justice ).

The Big Cherry Basin is unique for many reasons!

[ The Big Cherry is one of numerous highly elevated basins within the great High Knob Massif, as I briefly detail within the following section of my website:

Despite light, southerly winds across the summit area of High Knob, air became very cold within the depths of the Big Cherry, as rapid temperature drops amid the very dry air occurred beneath the exposed crestlines into the predawn hours of October 21.

The steep gradient of South Fork Gorge, which features an American Whitewater rated Class V+ extreme creek that plunges 1433 vertical feet in 4 miles ( 1391 feet of vertical drop occurring within 3 miles ), only acted to enhance the drainage of this dense air from the Big Cherry via downslope funneling and gravity.

As cold air drained downward through awesome depths of South Fork Gorge it began undercutting, lifting, and cooling relatively warmer air below, such that condensation occurred and visible fog formed to spill outward across a frosty ground.

Frost formation out across the open Valley being largely a product of calm winds, radiational cooling, and down valley drainage of air cooling from the Valley head.

The depth of the coldest air in the first photograph by Roddy, at the beginning of this section, being denoted by the smooth, even top of the thick fog layer ( marking a notable low-level inversion ).

I write about this since the Cracker Neck of Powell Valley is simply notorious for nocturnal fog formations, and notable night-time drainage winds that blow through South Fork Gorge into the Valley opening.

[ South Fork Gorge can also alter orographic gravity waves, in the reverse direction, as air is funneled upward through the great Gorge from the northwest.  Indications of it's location have been well documented on NASA visible satellite images, via gravity wave breaks, all the way into northern Tennessee ].

A modifying factor in the above described processes being the 106 acre Big Cherry Lake, which adds both moisture to the overlying air ( at least a little ) and a little warmth, as air naturally drains across it's surface from the upper basin toward Big Cherry Dam and the head of South Fork Gorge.

[ Another modifying factor into the Valley being the forcing of fog formation, where the latent heat of condensation, that occurs upon development of fog, works to offset some of the cooling ].

Once the highcountry lake freezes over, as the Big Cherry can rapidly do following the onset of cold weather, all bets are off as the colder air of the highcountry basin can then filter down into the Cracker Neck ( without modification ) to drop temps lower than they would otherwise get on nights favorable for good drainage.

Throughout the year, tastes of the highcountry are transported down to the valley floors by cold air drainage corridors like this notable South Fork Gorge funnel.

This makes true heat waves a most rare phenomenon for valleys adjacent to the High Knob highcountry, as even if daylight hours are blazingly hot it is almost certain that nights will feature very significant temperature drops and refreshing breezes via the orographically driven climatic gradients of these drainage corridors ( e.g., it would be extremely rare to ever have a night stay above 70 degrees, as verified by NWS cooperative stations amid cool air drainages in the surrounding area ).

From East Stone Gap, the nature of the stair-stepping mountain terrain surrounding South Fork Gorge ( and its impressive drainage corridor ) is only partially visible.

[ Air draining the High Knob highcountry can develop rather impressive drainage flows, with many evenings at Legion Park, within the city of Norton, featuring flows which are strong enough to stretch out Old Glory ( our beloved American Flag ) as air drains off the northern slopes of the massif ].

From far away, as viewed from famous Powell Valley Overlook, the nature of these rugged, stair-stepping mountain ridges can be observed in this scenic photograph by Harold Jerrell. 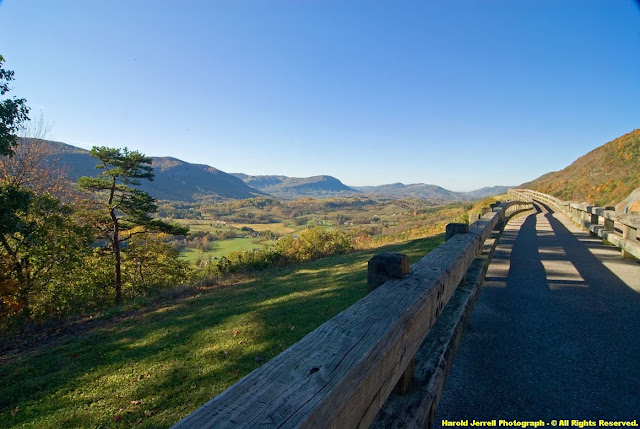 Photograph by Harold Jerrell - © All Rights Reserved.
A dramatic landscape....a dramatic gradient in weather conditions, even amid what most think are "quiet" times!

[ Note that the beautiful stair-stepping mountain ridges, which become increasingly high with distance above the Valley floor, are located just southwest of the opening of South Fork Gorge ].

These dramatic weather gradients encompass all aspects of the local climate within this area, with 2009 precipitation totals as of mid-October varying from just over 53.00" at South Fork Gorge ( Big Stone Gap ) Water Plant, in Cracker Neck, to around 65.00" at Big Cherry Dam.

In reality, however, the Big Cherry Dam total is closer to 68.00" since hand measurements are not taken daily, like they are at the Water Plant ( the result being approximately 3.00" of loss from the rain gauge due to evaporation in between measurements ).

All measurements courtesy of Superintendent Gary Hampton, and his fine staff, of the Big Stone Gap WP.
Posted by Wayne Browning at 12:44 PM