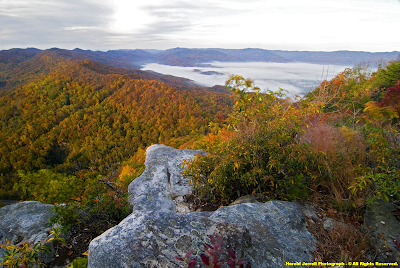 From magnificent Cumberland Gap National Historical Park to Breaks Interstate Park, autumn colors have been on beauitful display during the past week across lower elevations of the Cumberlands ( at elevations below 2000 feet ).
[ Note in Harold's photograph above, that a morning inversion with cool, calm air amid the Middlesboro Astrobleme Basin, has generated a layer of fog beneath an array of orographic wave clouds which have formed within much stronger air currents rushing across the Cumberland and Log mountains ].
Fog was also a key feature in Breaks Interstate Park this past weekend, as moist, cooling air drained downstream from John Flannagan Lake through the majestic, rugged depths of Breaks Gorge.
"The Towers" Beneath Fog-Capped Rims of Breaks Gorge 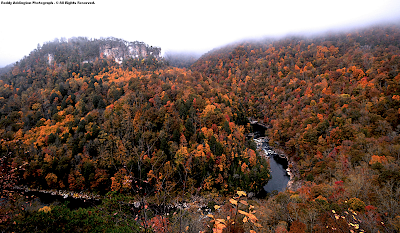 
Visitors to Breaks Interstate Park may not think of it as being within the lower elevations, but most of the Park actually sits below 2000 feet.  The top of the jagged Towers, visible in Roddy's photograph above, is nearly 500 vertical feet lower in elevation than downtown portions of the city of Norton.  Yes, that is not often thought about!
The highest peak visible from the Park's many dazzling overlooks, is the massive Skegg Wall which caps Pine Mountain.  The upper portion of it stands, although hard to believe, not much above the water level of Bark Camp Lake in the High Knob Massif.
A hike up to Skegg Knob, adjacent to Skegg Gap and the massive Skegg Wall, is a difficult but rewarding experience.  On a clear day, as I have been humbled to observe, it's possible to see the High Knob highcountry capping the horizon upon looking across the upward sloping crest of the massive Skegg Wall.  An incredible site!

[ An old gravel quarry adjacent to Skegg Wall, in Pike County, Ky., has been GREATLY expanded in size during recent years, with the extensive quarrying of Greenbrier Limestone outcrops ]. 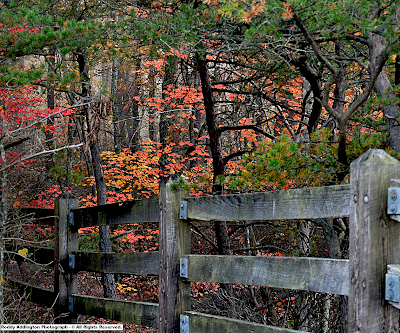 Photograph by Roddy Addington - © All Rights Reserved.
That Breaks Interstate Park sits amid lower elevations becomes obvious, when considering it contains the single water-level outlet for the 500+ square mile Russell Fork Basin.
It is here that water declared war upon rock!
It is here that a Mastercraftsman began the work of carving out the jagged, cliff lined, rock filled depths of Breaks Gorge from the northeastern end of Pine Mountain.
It is here that rock surrendered to water, and great palisade walls rose high above the turbulent, grinding, whitewater that still carves the Gorge today.
Kayakers Amid The Class IV-V+ Breaks Gorge 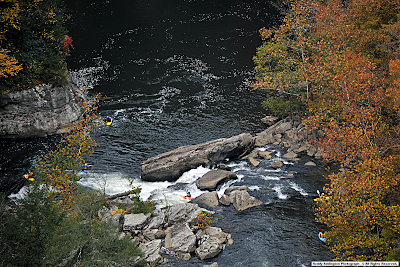 Photograph by Roddy Addington - © All Rights Reserved.
By the time whitewater exits Elkhorn City, Ky., the Russell Fork River has dropped to 749 feet above sea level, 647 vertical feet lower than the summer pool elevation of John Flannagan Lake and 3474 vertical feet lower than the peak of the High Knob Massif.
The drop along the Russell Fork becomes significant through Breaks Gorge, where 140 feet of vertical drop per mile is average ( with a max gradient of up to 190 feet per mile ).
This generates an American Whitewater rated Class IV-V+ run, which has become known as    "The Beast of the East."

The most dangerous commerically rafted river in the eastern United States.
Although upper reaches of Cumberland Gap National Historical Park ( NHP ) contain a good amount of elevated high terrain amid its wilderness backcountry, within the Martins Fork and Shillalah Creek basins, from Hensley Flats along Bailes Meadows to White Rocks, it is also surrounded by extensive lower terrain.
The Original Historic Cumberland Gap - Oct 26, 2009 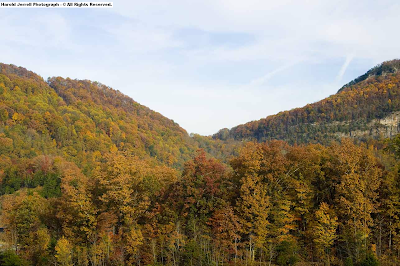 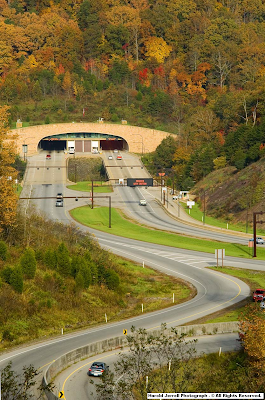 Photograph by Harold Jerrell - © All Rights Reserved.
Extensive efforts have been made to restore the "historic" Cumberland Gap to its former state, with building of the new Tunnels being a rather impressive feature of construction.

However, these are not even close to the awesome majesty which remains to impress those who visit great Cumberland Gap NHP.

Photograph by Harold Jerrell - © All Rights Reserved.
These large elevation variations within the Cumberland Mountains, generate multi-peak periods each autumn, as this website is illustrating ( with a global warming tendency toward later mean peaks being a dominant trend observed during the past 10-20 years ).
During the 2009 autumn season, early color changes could be seen amid upper elevations of the High Knob Massif during mid-late September, with climax occurring during the October 10-17 period above 2700 feet ( locally before October 10 on some high, wind swept crests ).  A fairly "normal" season in terms of rate of color changes in the highcountry.
The week of October 18-24 featured peak conditions across lower and middle elevations,     with some color lingering this week across lower elevations, and within protected coves and hollows of the mountains.
And as you can see by the following pictures from photographers Harold Jerrell and Roddy Addington, there is MUCH color that remains which is not just "in the trees."
Aster Species In Morning Dew 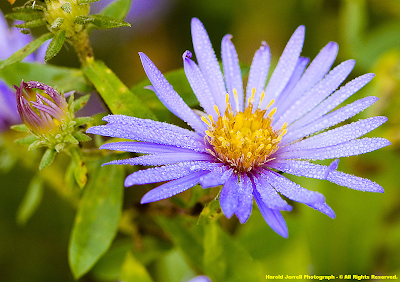 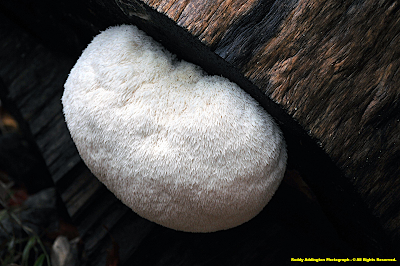 Photograph by Roddy Addington - © All Rights Reserved.
In general, and there are ALWAYS exceptions, colorations during 2009 seemed to be best across middle to upper elevations, with simply spectacular conditions observed within the High Knob Massif and along higher reaches of the mountain flanks of its extended landform.

Reference the following to view the glorious color climax:  http://www.highknoblandform.com/2009/10/high-knob-massif-reaches-glorious-color.html
[ The Kentucky ColorFall 2009 connection reports that this is the peak week across most of the foothills of the east, with lesser 45-60 percent change reported from around Dale Hollow Lake west toward Pennyrile Forest in western Kentucky ].

This forms a broadly concave basin, called the Middlesboro Basin, which actually extends far beyond Middlesboro itself along the entire length of the great Cumberland Mountain Overthrust Block ( into northern Wise & Dickenson counties ).
Note also how rock layers beneath the Powell Valley Anticline, the geological framework of the great High Knob Landform ( HKL ), are all arched in the cross-section above ( from Cumberland Mountain southeast ).

If the other side of this cross-section was completed and visible, its pre-erosional state would form a great mound of rock stratas reaching from rugged Cumberland Mountain and Poor Valley Ridge southeast to Wallen Ridge, Powell Mountain, and lovely Newman Ridge.
It would show a consolidated mountain spanning the entire breath of today's Powell River Valley, such that prior to massive erosion most of Lee County, and adjoining counties along the winding Powell River, were once covered by a great mass of mountain.

The High Knob Landform ( HKL ), whose heart was eventually breached, or opened, to reveal the wondrous karst valleys and rolling landscape so beloved today.

The lofty backbone of Cumberland Gap NHP offers an ideal view of this great landscape, as illustrated by Harold Jerrell's gorgeous photograph below which looks across southern Lee County.


Looking Across the Opened HKL from Pinnacle Overlook 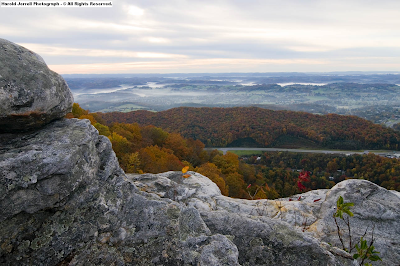 Photograph by Harold Jerrell - © All Rights Reserved.
[ The Pinnacle Overlook stands at about the same elevation as downtown Wise, with increases in elevation toward the northeast along the spine of Cumberland Gap NHP.  A substantial amount of highcountry exists within the confluence of Cumberland-Brush mountains, as the northwestern flank of the HKL develops a more complex geologic structure across central-northeastern sections of the National Park.
This will be highlighted in more detail within a later writing, so stay tuned to my website ].
In Summary...Reference Endemics Characteristics In My Main HKL Section for more details and graphics ):

http://www.highknoblandform.com/2009/09/high-knob-landform.html
The Cumberland ( Brush )-Stone-Little Stone Mountain crestlines mark the northwestern flank of the HKL, while Powell Mountain and Newman Ridge stand as what remains of its highly eroded southeastern flank ( southwest of the North Fork of Clinch River Gap, or The Divide, which separates the remnant massif of High Knob from the Wallen Creek Basin nestled amid Powell Mountain-Wallen Ridge ).
The High Knob Massif is the only large expanse of highcountry remaining today of this once enormous mass of mountain, that dominated the western front range of the southern Appalachians.
The complete HKL then consists of a remnant highcountry mass ( the High Knob Massif ), a dominant and elongated northwestern mountain flank, a prominent but more highly eroded southeastern flank, and a great calcareous heart of rolling karst valleys lying between these ruggedly majestic mountains.
This is illustrated by the high resolution NASA visible image below, where the HKL has been outlined in RED.

The entire landform is visible, except for the very southwestern end, which runs back northwest along the Jacksboro Cross-fault to rejoin the southeastern & northwestern flanks ( near I-75 ) just southwest of Norris Lake in northern Tennessee ( amid union of the Clinch-Powell rivers ).
NASA Visible Satellite Image - January 11, 2004 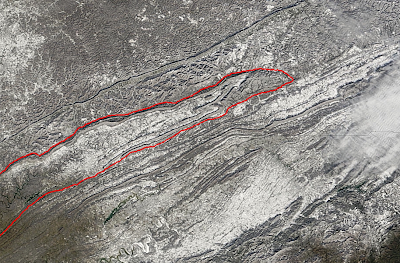 
[ The mountain flanks being continuous with the High Knob Massif of today, and the breaching of the great heart of this landform ( the geologic Powell Valley Anticline ) occuring by headward erosion over time, so that today the apex of this process is marked by the V-shaped head of Powell Valley in Wise County, Virginia.

The name for this website is therefore, rightfully, that of The High Knob Landform after the remnant massif of highcountry to which it remains continuous today.

Reference this link for a more detailed explaination of The Name & Purpose Of This Website: