A wet September across the High Knob Landform ( HKL ) kept Mother Nature busy, a mixing up colors at the top and bottom of her forested domain!

Yes, as only she can do, colorations galore were to be found ahead of the traditionally famous October climax, amid the highcountry of the
High Knob Massif. 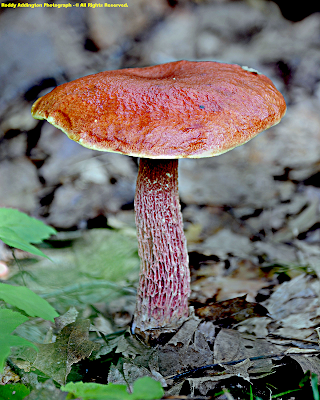 A vast array of fungi blanket the HKL, with the distinct yellow-ringed cap of a nice Shaggy-stalked Bolete being recently captured in all it's glory amid the lofty High Knob Lake Basin of High Knob by photographer Roddy Addington. 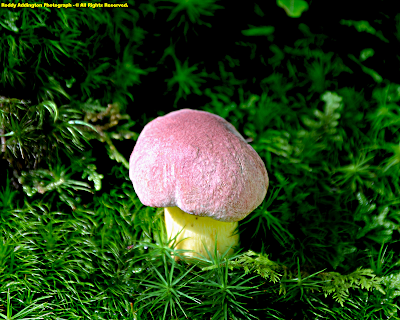 Another gorgeous member of the family was found nearby, as a Two-colored Bolete Mushroom was seemingly planted perferctly, amid beautiful Hair-cap Moss ( Polytrichum spp. ), to highlight it's contrasting pink and yellow hues.  What a sight!

Both of these Bolete's, which can be found from summer into autumn, can be easily overlooked by those gazing upward toward the more commonly expected colors. 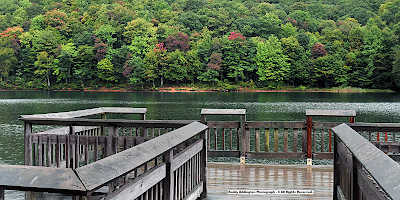 Some of the earliest color changes in Virginia can be found each year across upper north slopes of the High Knob Massif, with lofty basins like that of Benges Branch being perfect corridors for cold air draining downward from the crestlines.

The torrential rains of the September 25-27 period were not good for these early changers, with initial color taking a beating under a 4.00" to 6.00" deluge that got the extreme whitewater creeks rolling out of the highcountry.

Not to be outdone, during both August & September, Little Stony Basin put on a mushroom show fit for a Queen.  In fact, to decorate her crown Mother Nature produced some special gems! 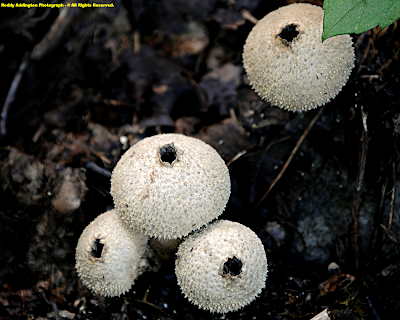 
These beauties have to be observed up close to be truly appreciated, and are about as shiny as water reflections off majestic Bark Camp Lake of High Knob.  At least, those reflections seen on a cloudy day! 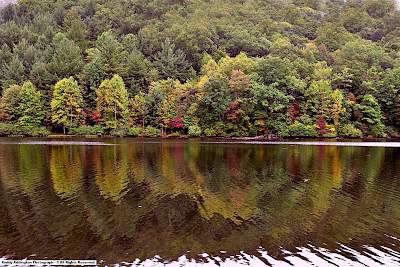 September 2009 was a month of near average temperatures, with plentiful humidity supporting a bounty of rainfall across the HKL and much of the region. 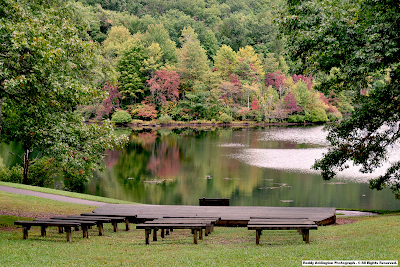 Take a look through my extensive listing of rainfall totals to find a tally close to you, across the great state of Virginia.

This is estimated to be at least 3.00" less than the actual total which could have been obtained by hand-measuring every day ( due to evaporation losses in between measurements at the Dam ).

Of course, in reality, the true precipitation amount that fell is even greater than the estimated 3.00" evaporatative loss, since wind-induced rain gage undercatches in both rainfall and frozen precip forms are not even being considered ( neither are the significant secondary moisture contributions from fog drip off trees and rime deposition on trees ). 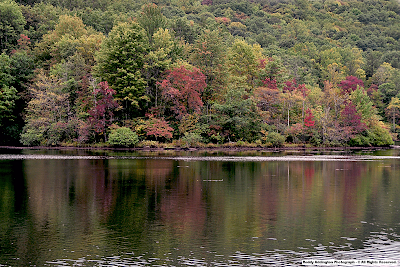 [ Cold air drainage into the Bark Camp Basin aiding the early color changes observed, within its 2700 to 3440 foot elevation zone ].

As the above listing illustrates, within the BIG picture, rainfall during September was not evenly distributed, with a heavy bias toward the rugged and mountainous western Appalachian front range in Virginia.

Rainfall totals across the western half of the Old Dominion varied from only 2.33" in Blacksburg, home of the Hokies, to not much shy of a solid FOOT in wettest portions of the High Knob Massif.

There was also a large rainfall gradient across eastern Virginia as well, between the Fall Line ( around Richmond ) and the marsh-lined shores and lovely beaches of the great Atlantic Ocean & Chesapeake Bay.

These regional rainfall extremes seemed to be the norm during September 2009, with a lack of tropical storm activity being compensated for in the Deep South, and along the Atlantic Coast, by an atypically active sub-tropical Jet Stream!

Case in point, the horrendous, localized but record setting flooding across portions of Georgia.

These tremendous rains reached northeast into upslope areas of the western Carolina's, where traditionally wet Lake Toxaway ended the month with 24.52" to effectively bash a long-term drought.


The end result was a rainfall pattern across the southern Appalachians ( especially across southern and eastern flanks of the ancient chain ) that at least mimicked those documented over longer time scales by Chip Konrad, of the great University of North Carolina, with significant and distinct decreases in amounts with increasing distance from the major moisture sources of the Gulf of Mexico & Atlantic.


As I have personally documented in my long-term climatic research on the HKL, orographically induced moisture extraction is a very important factor in the precipitation regime of downstream locations.  In this case, I'm not talking just about the typically expected differences observed between windward slopes and adjacent leeside valleys, but instead about other high mountains downstream along the Appalachian chain.

Although many factors are involved, as well documented by Chip Konrad in complex topo-parametric studies, the bottom line is that the extraction of moisture by upstream mountains results in less moisture being available for orographic enhancement by mountains sitting downstream in the flow ( regardless of their size ).

The end result is that mountains across the northeastern end of the Blue Ridge Province of the southern Appalachians get significantly less total precipitation, on an annual basis, than those mountains toward the southwestern end which initially perturb the prevailing winds.  In other words, there is MUCH more than sheer elevation at play along the extent of the mountain chain.

[ The complexity of this being GREATLY increased by often dubious precipitation measurements across mid to upper elevations exposed to significant winds, via well-documented wind induced rain gauge undercatches.

Assuming this is a problem along the entire extent of the mountain chain, the above stated variation should hold even though the actual, true, precipitation numbers may vary at any given site ].

Since southwesterly winds are a dominant flow trajectory in advance of many fronts, this can make the topographic opening of the Tennessee Valley very important at times, with enhanced moisture advection, or transport, northeastward into the Cumberland Plateau and High Knob Landform along a flow field channel that is largely unaltered by big, upstream mountains.

Taken in summation over a long period, this has significant implications upon the precipitation distribution across the Old Dominion.


As the above graphic illustrates, a southwest
( SW ) trajectory can flow northeast through the opening in the Tennessee River Valley, bypassing high mountains of the Blue Ridge Province, and reach the HKL and High Knob Massif without first having to cross highly elevated terrain.  This leaves more moisture for orographic enhancement to work on across the HKL.

Even if airflow turns WSW, terrain across the Cumberland Plateau of Tennessee and southern Kentucky, west-southwest of the Cumberland Mountains and HKL, is much lower in elevation and extracts less moisture from the airflow than would higher terrain.


The situation is much different for SW trajectories flowing across the Blue Ridge Province, with many high mountains having to first be crossed from southwest to northeast along the mountain chain.

This results in less moisture being available for orographic enhancements across the northeastern half of the Blue Ridge Province, via large amounts of downstream moisture extraction.

This is a major reason why the Mount Rogers-Whitetop Massif gets less total precipitation, on an annual basis, than would be expected for such a highly elevated mass ( less in comparison to those mountains initially perturbing the moisture rich streams flowing off the Gulf of Mexico & Atlantic ).

The above situation, when extrapolated downstream of the HKL, also has important impacts on those leeward lying locations within the upper Clinch River Basin and New River Basin of southwestern Virginia and West Virginia
( via moisture robbing by the HKL, and its remnant massif, and by the northeastern end of the Mount Rogers-Whitetop-Iron Mountain complex ).

During the long-term, especially, these above noted moisture extractions are largely responsible
( as one example ) for the relatively low amounts of annual precipitation measured within the Beckley to Bluefield corridor of West Virginia ( despite its relatively high plateau setting ).  A shock to many unaware of these amazing, orographically altered and enhanced, moisture gradients.

During the short-term, of just the January-September period of 2009, there has been significant forced variations in precipitation by the High Knob Massif via orographic enhancements within its lifting zone and subsequent moisture extractions downstream of its highcountry.

The result has been a general 55-65" of total precipitation, through September 2009, within the lifting zone of the High Knob Massif verses 35-45" in locations downstream of the massif in all of the surrounding quadrants ( the local exception being sites supported by upsloping along highest portions of adjacent Big Black Mountain ).

Most importantly, over the longer term, the factors discussed above have played a significant role in establishing the very great biodiversity & karstification gradients which exist across the southern-central Appalachians ( i.e., from SW to NE along the mountain chain, and more locally on the micro and meso scales within the HKL itself ).

Those rather important NW to SE gradients, important to SNOW lovers, will be discussed later, once those howling winds of Ole Man Winter arrive!
Posted by Wayne Browning at 10:12 AM